OSLO – On Friday the national team of Kazakhstan, after a hard fight with Canada, gives the Maple Leaves a playoff chance, losing 2-4. 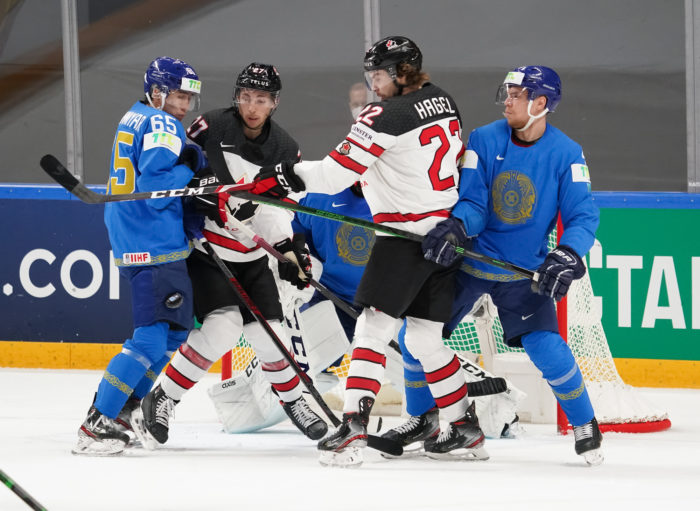 According to IIHF, Kazakhstan’s progress at this year’s World Championship has been one of the most refreshing stories of 2021. First-ever victories over Latvia and Finland at this level proved that the newly-promoted nation has what it takes to compete among the Elite. Photo credit: IIHF.

Before the match, the website of the International Ice Hockey Federation published an article “Fathers and Sons” dedicated to father and son Mikhailis –  head coach Yuri and one of the best forwards of the Kazakh team Nikita. Mikhailis Jr., justifying the attention to himself, returned the loan, scoring twice.

Surprisingly dangerous with their opportunism, the newly promoted Kazakhs had previously picked up points in every game in Riga except their 3-0 loss to the Americans. 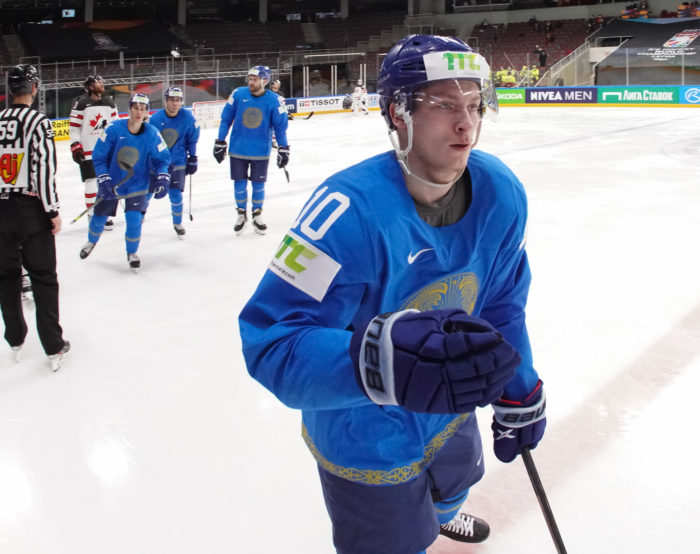 Also social network users in Kazakhstan even spread the main meme of the current World Cup: If Kazakhstan loses to Canada, it will be a real shame.

Yuri Mikhailis gave Andrei Shutov the start in net over Nikita Boyarkin, who had starred in their previous four games with a 1.92 GAA and 94.5 save percentage. Shutov, a 23-year-old Ust-Kamenogorsk native, came in with just one previous IIHF appearance at the U18 Division IA level in 2015-16. He showed strong athleticism and reflexes in his top-level debut.

Kazakhstan played without defenceman Ivan Stepanenko, serving a one-game suspension for a hit to the head and neck area of Germany’s Lukas Reichel.

The Canadian power play entered this game clicking at a tournament-worst 6.25 percent, while Kazakhstan’s penalty kill ranked second at 90.1. Canada took the early lead on the man advantage when Mangiapane whacked in a rebound at 6:03 in a wild goalmouth scramble. The play was video-reviewed and deemed good.

Minutes later, Shutov made a fantastic save on a pinching Jacob Bernard-Docker, who received Perfetti’s pass from the side of the net, to keep it a one-goal game. At the other end, Kuemper denied Kazakh captain Roman Starchenko on a breakaway, kicking the puck away dexterously as it squeezed through his pads.

Just 1:10 into the second period, Henrique gave Canada a two-goal lead with a sweet tip of defenceman Owen Power’s drive from the blue line.

Then it was time for Mikhalis Jr., who twice effectively scored goals. Nikita came down the left wing on a 3-on-1 break and beat Kuemper five-hole to cut the deficit to 2-1 at 4:30. At 1:31 of the third period, Mikhalis Jr. tied it up on the rush, taking a drop pass from Curtis Valk in the middle and beating Kuemper on the glove side. A little later Mikhailis Jr. had another chance to score, but goalie Kuemper set a barrier in the last frontier.

Perfetti put Canada up 3-2 at 7:40 with a nice wrister from the right faceoff circle that deflected upward off a Kazakh defender’s stick.

With Shutov pulled for the extra attacker in the dying stages, Kazakhstan pressured hard in the Canadian zone, but Brown added an empty-netter with three seconds left.

Maple Leaves, who started off the tournament in unprecedented fashion with three consecutive losses, have now won two straight games.

Kazakhstan, which remains at seven points, is right back in action on Saturday against Italy, and after a one day pause on Monday Norway.

Canada has two preliminary-round games left against Italy on Sunday and defending champion Finland on Tuesday.