OSLO – In the sixth match of the Ice Hockey World Championship, the national team of Kazakhstan defeated the Italian team with a crushing score of 11-3. This result was the largest victory in the current tournament. Аnd it is very pleasant to note that this victory was won by the Kazakh team. 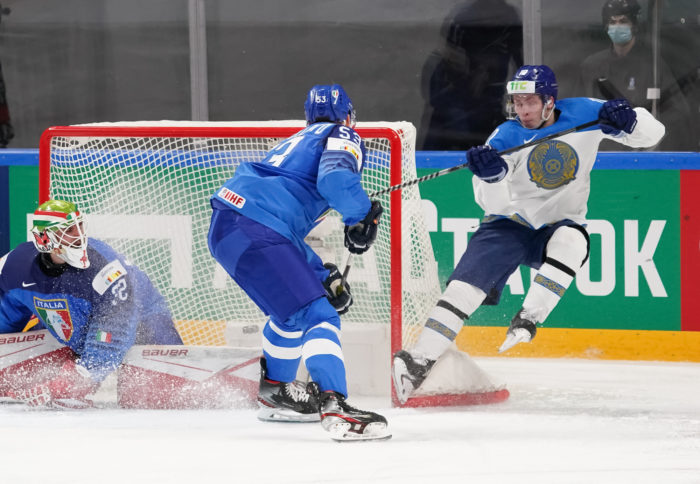 According to the IIHF, with shootout victories over Latvia and Finland and a regulation win over Germany, things have gone very well for Kazakhstan as the Central Asian nation eyes its first ever quarter-final berth at the IIHF Ice Hockey World Championships. Photo credit: IIHF.

Kazakhstan got an early power play when Stefano Giliati went off for holding at 2:03 and it took them just nine seconds to capitalize. From down low, Curtis Valk found Roman Starchenko at the back door and it was 1-0 on the game’s first shot on goal.

But that kind of offence wasn’t indicative of what was to come in the first period, as the Italians ground the flow to a near halt. Shots were just 6-5 Italy after 20 minutes. 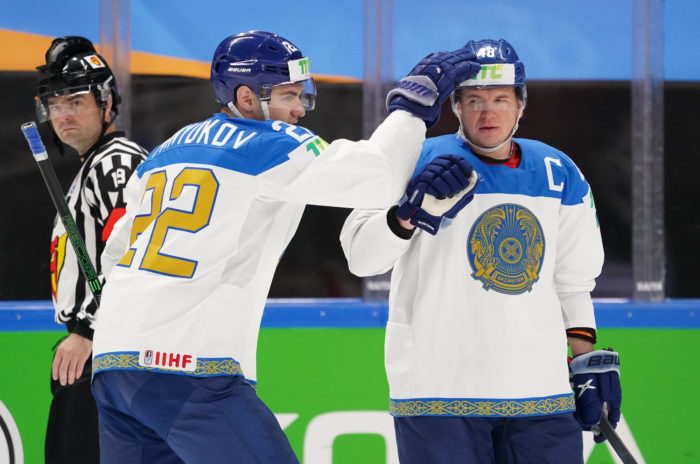 On Friday the national team of Kazakhstan, after a hard fight with Canada, gives the Maple Leaves a playoff chance, losing 2-4. Photo credit: IIHF.

Italy drew even at 24:37 when Petan found Angelo Miceli with a backhand pass, and the HC Bolzano forward made no mistake, using his long reach to beat Nikita Boyarkin on the forehand deck.

“I thought we were in it, even the shots were not as bad in the other games,” said Miceli. “We played two good periods and had a letdown in the third. It’s high-level of hockey and you cannot take a shift off and we took a period off. We had penalty trouble and that cost us.”

It remained tied past the game’s midpoint but the Kazakhs regained the lead and gave themselves a bit of breathing room with two goals 2:28 apart. After some sustained pressure in the Italian zone, Alikhan Asetov found Yegor Petukhov wide open in front, and he easily beat a sprawling Justin Fazio.

“The Italian players weren’t covering me very well, and it was very free around the net,” Petukhov explained. “Alikhan made the pass and I scored the goal. This goal didn’t decide the game. There was still a lot of time in front of us, so I kept my emotions inside but I was very happy.”

Then from a tight angle, Yevgeni Rymarov was able to pick the near-side top corner over Fazio’s left shoulder to make it 3-1.

“I wasn’t planning to shoot from there but the goalie fell down and that created some room upstairs, so I went for it and hit it,” Rymarov smiled.

“We knew that we were stronger and had more skilled players, but they defended against us very well,” said Kazakh coach Yuri Mikhailis. “But then once we scored the second and third goals, things started to go better. After that, the guys relaxed, started making better passes and nice combinations.”

Down by two goals, the Italians had a 5-on-3 advantage for 1:25 late in the second period and desperately needed a goal to get themselves back into the game. They came close, but just couldn’t find the back of the net.

The teams traded goals in the second minute of the third period. On the power play, Starchenko found Nikita Mikhailis for the tap-in at the far post for his third goal in two games to make it 4-1 Kazakhstan, but 22 seconds later Peter Hochkofter put a backhander over Boyarkin to make it a two-goal game again.

But Kazakhstan broke the game open with three goals in a span of 3:34 to make it a 7-2 game. First it was Valk with another power-play goal, then a pair of goals by Likhotnikov, showing his speed and soft hands with a couple of nice goals.

“We kind of dropped down physically, we looked tired and were late,” said Italian coach Giorgio de Bettin. “After these three goals in the third period we mentally gave up. We have to analyze what happened but the main reason is we were physically tired in the end and couldn’t keep up with them.”

At that point, Fazio was mercifully pulled in favour of Davide Fadani, giving the youngster half a period of work. But the Kazakhs showed no mercy on him either. After Petan got Italy’s third goal, Kirill Panyukov, Starchenko, Viktor Svedberg and Yegor Shalapov on a two-man advantage rounded out the scoring. In the third period, four of Kazakhstan’s eight goals came on the power play.

“We are not euphoric. It could have been after the first game or after the game against Finland. But you see that the team is tuned in to each match and given away. We will also continue to go out and give all our energy to the game for the result,” said Kazakh coach Yuri Mikhailis after the game.

“The mood on the team is very good right now,” said Rymarev. “We’re happy with every win but our emotions are in control because our work isn’t finished. We will approach the next game as we do the others, play our game and try to win.”

“We knew it’s going to be a tough game especially at the start and after playing yesterday,” said Valk. “We found a good start and found our legs a bit and pulled it away. It feels good to be rewarded and see some guys score goals. The guys are having a lot of fun. We came here with the attitude that we’re kind of the underdogs and come into every game to win.”

In addition to winning with a large score, with 5 points (2+3) Starchenko also set an individual record for the current Championship in terms of the number of points scored in one match. After this game, the captain of the Kazakh team was among the top three scorers with 7 (3+4) points together with the Danish Nicklas Jensen and Slovak Peter Cehlarik.

«With shootout victories over Latvia and Finland and a regulation win over Germany, things have gone very well for Kazakhstan as the Central Asian nation eyes its first ever quarter-final berth at the World Championships», writes the website of the International Ice Hockey Federation.

The victory over Italy allowed Kazakhstan even to become the leaders of group B, but only for a few hours. On Monday, the last match is against Norway, which has lost the chance of getting into the playoffs.

However, by now the Kazakhstan team has set a record. The team scored more points at this tournament than during the entire all time of participation in the world elite championships since Independence.

Believe this record will also be updated very soon.