NUR-SULTAN – Kazakh women who have been returned from Syria are in the process of reverse integration into the Kazakh society with the goal of developing a sense of civic and national identity via gender-oriented rehabilitation. The insights of the process were shared by the Head of the rehabilitation center and Founder of the ZOOM-Jusan national project Gulnaz Razdykova in an interview for Zakon.kz on May 25. 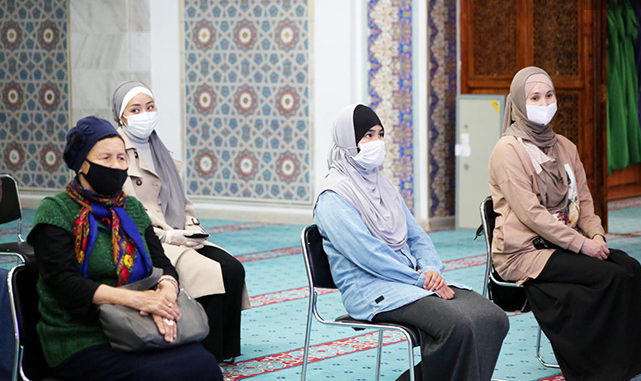 Returnees attending a meeting of the Spiritual Directorate of Kazakh Muslims in Atyrau. Photo credit: Azan.kz

Kazakh citizens have been returned to Kazakhstan from Syria as a result of the Jusan humanitarian operation launched in 2019 by the initiative of Kazakhstan’s First President Nursultan Nazarbayev. The name of the operation, Jusan, is translated as bitter wormwood from Kazakh, which is often associated with the scent of the steppes and has an association with the motherland in Kazakhstan.

According to the Kazakh National Security Committee, as of March 2021, the humanitarian operation successfully evacuated 600 Kazakh citizens, including 413 children, out of which 34 were orphans. The majority of the returned population are placed in special adaptation centers to undergo comprehensive rehabilitation work with theologians, religious scholars, psychologists, teachers and lawyers.

The returned women, on the other hand, usually fall into three main categories. The first one are those who do not need reintegration and rehabilitation. The second group consists of the women who abandoned the ideas of violence, aggression and radicalism but the process of their reintegration was delayed due to family, marriage or economic factors. The final group is the smallest one comprised of those who have received disabilities, injuries, or post-traumatic stress as a result of their time with ISIS.

Razdykova points out that the process of adaptation and reintegration is a lengthy one that would take more than a couple of years to show visible results. The rehabilitation process is multifaceted and is conducted simultaneously by the Kazakh Ministry of Information and Social Development, the Committee of Religious Affairs, rehabilitation centers and the Spiritual Directorate of Kazakh Muslims. The work centers on asking the returned women the right questions and working on their traumas without both placing the blame on them and completely disregarding their own responsibility in the matter.

The proximity to the warzone and international terrorist organizations causes many women to experience post-traumatic stress disorder (PTSD). The symptoms of PTSD include becoming forgetful and absent-minded, feeling anxious and hopeless, experiencing chronic fatigue and depression and losing a sense of meaning in life. One particularly painful consequence of surviving what these women have been through is the development of survivor’s guilt.

The methodology of working through survivor’s guilt and PTSD has a wide range and is highly individual, according to Razdykova. The practiced methods include counseling and supportive therapy, body-oriented therapy, art therapy, theological counseling, cultural and sports events, recreation and leisure, contests and quizzes, training and employment and support for individual business initiatives.

Due to the fact that the issue of female radicalization remains under-explored, gender-based approaches to rehabilitation have not been as widely discussed. Razdykova believes that women volunteering at rehabilitation centers may have a special potential to counter extremism and radicalization by effectively working with the returnees to develop a sense of civic and national identity. Fostering solidarity and encouraging socialization among women helps the returned women not to isolate themselves on religious pretexts and to begin considering themselves a part of Kazakh society.

Thus, a key strategy to utilize during the reintegration of returned Kazakh citizens into society is the focus on humanization. Razdykova states that focusing on the humanity of the returned women instead of on their past mistakes that lead to their radicalization alleviates the social stigma and also helps to prevent them from falling victims to radicalization again. “Of course, they want to completely dissolve into society and live a normal, fulfilling life and they have the right to do so. They also have the right to privacy,” said Razdykova.

Several successful cases of returned women’s rehabilitation have been reported in Uralsk, Shymkent, Kyzylorda, Aktobe, where women took grants for the development of business projects and now not only provide for themselves but also employ others. One of the returnees won a grant for the “10 Lessons of Jusan” media campaign within the framework of the Strengthening Resilience to Radicalization and Disinformation in Central Asia project funded by the European Union.

The coronavirus pandemic has forced the rehabilitation process to be reformed. Razdykova founded the “ZOOM-Jusan” project, which was able to unite the returnees of the Jusan operation with self-returned women from the armed conflict zone. As a result, more than a hundred women were covered by counseling and rehabilitation services. Online mode has also allowed for collaboration with qualified foreign specialists.