By Zhanna Shayakhmetova in Society on 23 May 2021

NUR-SULTAN – The Association for the Conservation of Biodiversity of Kazakhstan released information about the routes of the satellite-tagged steppe eagles (Aquila nipalensis), according to the association’s press service. 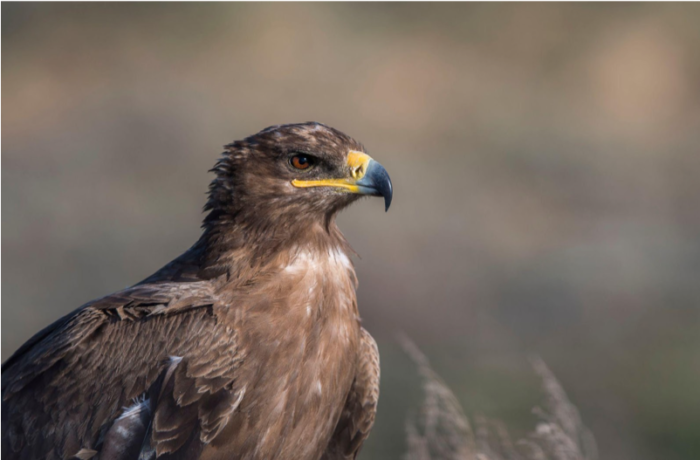 The scientists study the routes of its seasonal migrations to preserve this globally threatened species.

“Satellites transmit eagles’ location data 12 times during daylight hours, or from 2 a.m. to 2 p.m. GMT. Now the scientists can receive accurate information about the movement of birds, places of their stops, nesting and wintering, as well as determine which habitats are safe considering all possible threats along the entire migration route,” reads the release.

The Afro-Eurasian route passes through Eurasia, mainly Kazakhstan and southern Russia, then to East Africa and the Middle East. The Central Asian route starts from the Arctic and Siberia, and then runs through Kazakhstan to South Asia. The intersection of these two routes takes place in Central Kazakhstan, when eagles flying to Africa or Saudi Arabia meet on the crossroads with eagles that are heading to India or Pakistan.

Unfortunately, steppe eagles retain a low survival rate during migrations, the scientists warn. Steppe eagles face a number of threats both on their nesting grounds and during migration and wintering in Kazakhstan. The eagles are often killed by electric shock on power lines. Only some sections of power lines are equipped with effective bird protection devices. Nesting clutches die from fires in dry summer.

The eastern populations migrating through Mongolia and China often suffer from poisoning with chemicals used to fertilize fields and control rodents. In India, eagles often die on power lines. In some countries of East Africa, mass hunting for birds is widespread.

Since 2018, the movement of steppe eagles has been studied with the help of trackers. Up to 85 percent of the world population of steppe eagles reside in Kazakhstan. The steppe eagle is included in the Red Book of Kazakhstan, the European Red List and the International Union for Conservation of Nature Red List of Threatened Species. Its number is falling sharply. From 2005 to 2015, the number of breeding pairs in key regions has almost halved.