NUR-SULTAN – Kazakh Prime Minister Askar Mamin has instructed his government to accelerate the vaccine rollout during a May 25 government meeting, as more than two million people in Kazakhstan have received at least one dose of the vaccine against COVID-19, reports the Kazakh prime minister’s press service. 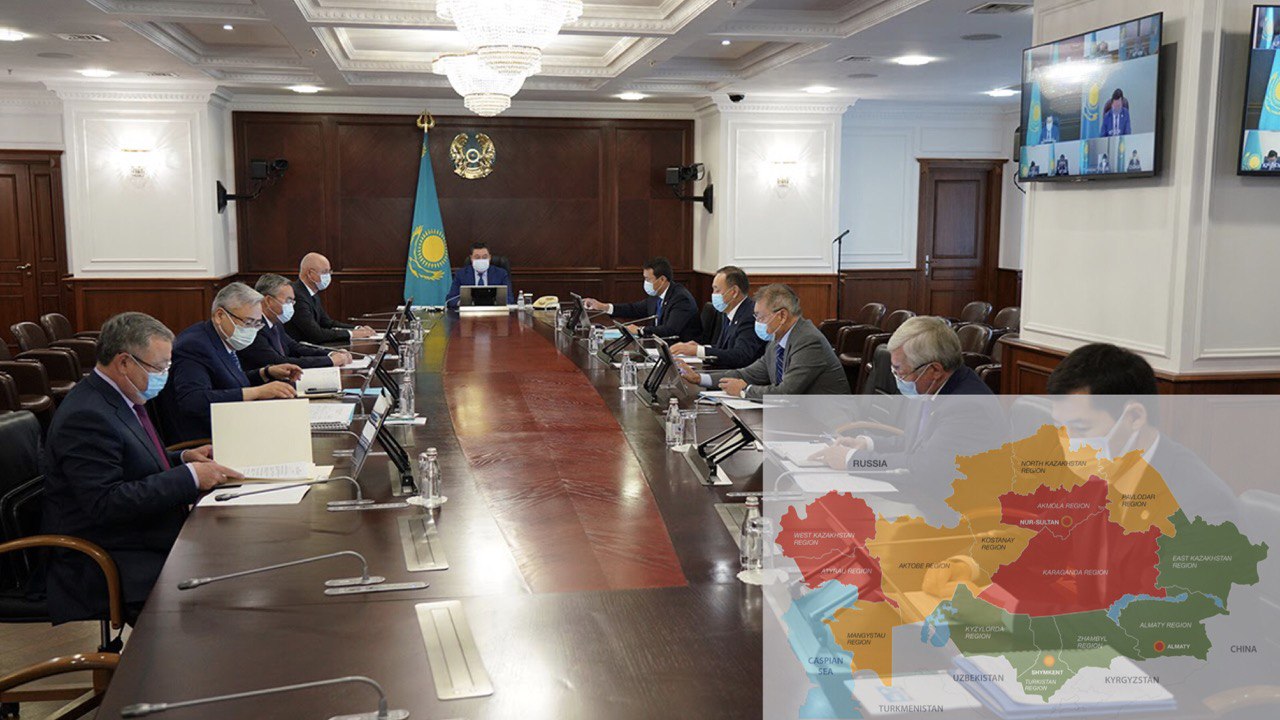 During the government meeting. Photo credit: primeminister.kz. Click to see the map in full size.

“To date, vaccination centers have sufficient vaccine doses – around 320,000 doses of the first component and 650,000 doses of the second component. Vaccine deliveries are carried out according to the schedule.  To determine new mutations, we constantly conduct a genetic study of coronavirus strains circulating in the country. The results of the study of samples identified in April revealed the circulation of the British strain in 30 percent of samples,” said Kazakh Minister of Healthcare Alexey Tsoy at the government meeting.

He said that the epidemiological situation in the country is stabilizing.

“We now observe positive dynamics of decreased morbidity and gradual stabilization of the epidemiological situation. The number of reported coronavirus cases in the past week decreased by 4,000, compared to the weekly incidence at the end of April and at the beginning of May,” said Tsoy.

Kazakhstan has been in the medium-risk yellow zone. Since the first case was reported in March 2020, there have been 376,572 coronavirus cases and 54,716 cases of coronavirus pneumonia.

The cities of Nur-Sultan and Almaty as well as Akmola, Karaganda, and Atyrau regions are in the red zone, while Aktobe, Pavlodar, Kostanai, Mangistau, North Kazakhstan regions, and the city of Shymkent in southern Kazakhstan remain in the yellow zone.

West Kazakhstan Region is in between the red and yellow zones. All other regions are in the green zone.

Tsoy said that the R0 value, which refers to the average number of people one infected person will infect, is estimated at 0.95.

Occupancy of infectious disease beds is 33 percent and 26 percent in intensive care.

Updated scenarios for the epidemiological situation

In the pessimistic scenario, where the effectiveness of vaccination remains at least 60 percent, the number of registered cases from June to September will reach around 95,000.

In the second realistic scenario, when the effectiveness of vaccination is not less than 80 percent, the projected number of registered cases from June to September 2021 will be around 69,000.

The optimistic scenario, with a vaccination rate of at least 95 percent, forecasts the number of cases to reach 61,000 in June-September 2021.