NUR-SULTAN – Kazakh Ministry of Foreign Affairs expects the level of foreign direct investment in Kazakhstan to rise back to the pre-pandemic level at the turn of 2022-2023. The prognosis, along with the results of previous foreign investments and current projects in development, was shared by the Ministry at a press briefing on May 31. 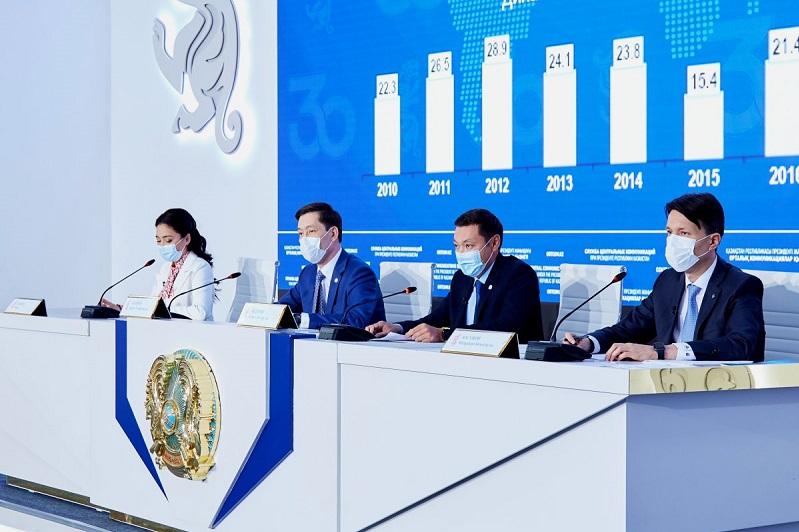 Representatives of Kazakh Ministry of Foreign Affairs and Kazakh Invest at Foreign Investment Briefing on May 31. Photo credit: Gov.kz.

90 percent of foreign direct investment last year came from the main 14 donor countries, such as the U.S., Russia, China, Turkey, the U.K., Japan and the U.A.E. Largest European investors came from the Netherlands, Switzerland, Belgium, France, Germany and Italy. Deputy Minister of Foreign Affairs Almas Aidarov expressed the goal to not only further develop ties with existing investors but to explore the investment potential of other countries as well.

“The main component of increasing the inflow of foreign direct investment, in addition to attracting new investors, is to retain existing investors that implement projects in the country. It is worth noting that, despite the current situation of the world, we continue to work actively to attract high-quality foreign investments to our country. Many investment projects are being implemented in connection with the task set for the next 5 years,” said Acting Chairman of the Investment Committee of the Ministry of Foreign Affairs Ardak Zebeshev.

The direct result of the work attracting foreign investment is a record number of contracts signed in 2020. 56 investment contracts were concluded during the year, of which 46 were concluded online through the elicense.kz virtual portal, for a total amount of $1.4 billion, the highest figure in the last 10 years. The largest agreements with a total sum of $119 million were signed in the manufacturing field.

The plans to expand foreign investment in Kazakhstan include attracting investors primarily in the fields of agro-industrial complex, mining and metallurgy, mechanical engineering, construction materials production and healthcare and pharmaceuticals.

While 32 projects with a total investment of $1.7 billion are already underway in Kazakhstan, there are already ideas developed for other programs. “70 investment proposals for foreign investors in the amount of $2.8 billion were prepared. Project information includes a teaser, business plan and financial model developed in accordance with international standards ” said Chairman of Kazakh Invest Meirzhan Yussupov.

In the first quarter of 2021, 9 projects worth $665 million have already begun being implemented. The projects are in the alternative energy, oil and gas, metallurgy, construction materials production and tourism industries. By the end of the year, another 36 more projects worth $4.4 billion are expected to be commissioned.

Specific domestic measures taken to foster foreign investment include assigning responsibilities to executives of government agencies for attracting and working with investors. The regions will also be ranked according to their achievement and implementation of the investment plan on an annual basis. The online service of signing investment contracts was improved upon as well.

All these preliminary results and current plans are expected to bring the volume of investment in fixed assets to 30 percent of Kazakhstan’s GDP and the volume of foreign direct investment to $30 billion by 2025.