NUR-SULTAN – The epidemiological situation in Kazakhstan is gradually stabilizing and the incidence rate declined 20 percent in the past two weeks, Kazakh Minister of Healthcare Alexey Tsoy told the government meeting on Tuesday. 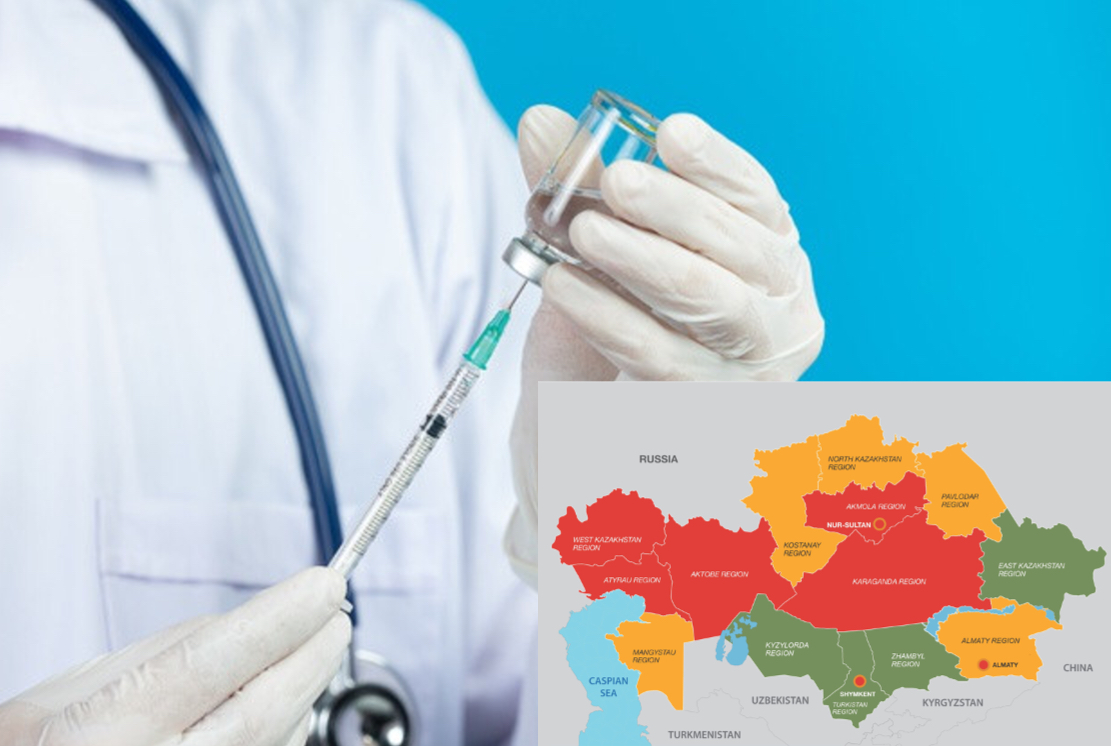 The cases were on the rise since the beginning of March. Click to see the map in full size.

“Currently, there is a positive trend in the reduction in the incidence of disease and the gradual stabilization of the epidemiological situation. Over the past two weeks compared with the previous two weeks, the incidence decreased by 20 percent,” said Tsoy.

The occupancy of infectious disease beds is 36 percent nationwide and 28 percent in intensive care beds. Nur-Sultan city and the Almaty Region have the highest occupancy rate with 49 percent and 45 percent, respectively.

Nur-Sultan has been in the high-risk red zone for the past two months, along with the cities of Almaty and Shymkent as well as Akmola, Atyrau, Aktobe, West Kazakhstan, Karaganda region, according to the matrix of the epidemiological situation updated daily by the ministry.

Almaty, Kostanay, Mangistau, Pavlodar, and the North Kazakhstan region are in the yellow zone, while East Kazakhstan, Zhambyl, Turkistan, and Kyzylorda regions are in the green zone.

“To date, vaccination centers have sufficient vaccine doses – around 500,000 doses of the first component and 750,000 doses of the second component. Vaccine deliveries are carried out according to the schedule. On May 14, the substrate for the production of Sputnik V was delivered to the Karaganda pharmaceutical plant and currently, 1.2 million doses of the vaccine are being produced in stages. By the end of the month, additional doses of Kazakh vaccine QazVac, and Hayat-Vax are expected to be delivered,” said the minister.

Kazakhstan developed the Ashyq mobile application to allow businesses to continue their work amid the coronavirus restrictions and minimize the spread of the coronavirus infection.

Businesses that were not affected by the restrictions can also join the system voluntarily.

Citizens must fill in their national identification number to use the app. Integrated with the data from the Ministry of Health, the app shows a person’s status ranging from green and blue when movement is not restricted to yellow (contacted with infected people) and red (positive PCR test).

The system, which was at first met with public criticism, was tested in January in Kazakhstan’s major cities of Nur-Sultan, Almaty, and Karaganda, and starting April 26, the project expanded nationwide.

Since the launch of the system, 1,867 people with red status (positive COVID-19 test result) and 1,389 people with yellow status (contact with an infected person) were reported trying to enter government facilities.

“These statistics show that, unfortunately, some citizens do not comply with the home isolation regime, try to visit public places, travel within the country, thereby posing a threat of infection to other visitors and passengers on the plane,” said Tsoy.