NUR-SULTAN –  A series of events commemorating the contribution of Kazakh soldiers to the victory over fascism in 1945 took place in Russia, Croatia, and Moldova over the past week, the Kazakh Foreign Ministry’s press service reported.

A photo exhibition dedicated to the 30th anniversary of Kazakh independence and the Victory Day opened in the center of Moscow May 6. 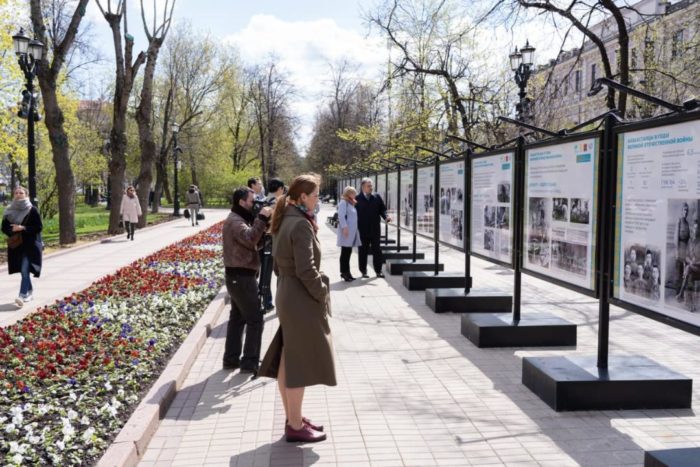 A photo exhibition dedicated to the 30th anniversary of Kazakh independence and the Victory Day in Moscow, Russia. Photo credit: Gov.kz

The exhibition is located at the Chistye Prudy boulevard and consists of 16 double-sided stands with unique photographs from the archives of the Nursultan Nazarbayev Foundation, the Kazakh Ministry of Information and Social Development, the Kazakh Military-Historical Museum and the Kazakh Tourism national company.

It introduces the achievements of Kazakhstan over the years of independence, its tourism potential, the development of cooperation with Russia and the significant contribution of Kazakh soldiers to the victory in World War II.

The Kazakh Ambassador to Russia Ermek Kosherbayev attended the opening ceremony along with the Head of Moscow’s Basmanny District Council Irina Lesnykh.

Ambassador Kosherbayev expressed gratitude to his Russian colleagues for their help in organizing the event and emphasized the exhibition’s importance for the cultural and humanitarian exchanges between the two countries. He also expressed the hope that the exhibition, which will last until May 16, will be interesting and informative for residents and guests of the Russian capital. 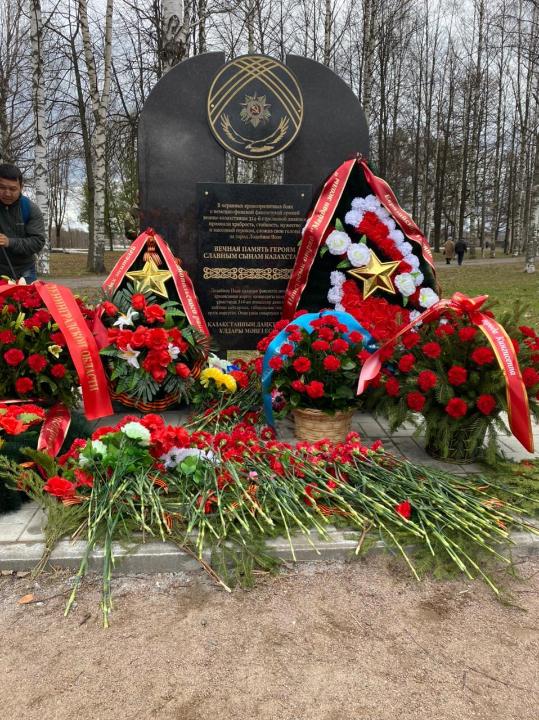 In another commemoration of the Kazakh contribution to the World War II victory, a monument to Kazakh soldiers of the 314th infantry division was erected in the Leningrad region of Russia on May 5.

The monument is located on the Walk of Fame memorial complex in Lodeynoye Pole of the Leningrad region and includes a metal capsule with a handful of Kazakh soil buried at its foot. Kazakh Consul General in St. Petersburg Bauyrzhan Dosmanbetov attended the opening ceremony.

The ceremony was dedicated to the 80th anniversary of the 314th infantry division formed in 1941 in Petropavlovsk. More than 70 percent of the division was comprised of the residents of the North Kazakhstan Region. The division took part in the main defensive and offensive operations of the Red Army and its members were awarded 3,832 orders of war and 4,694 combat medals. 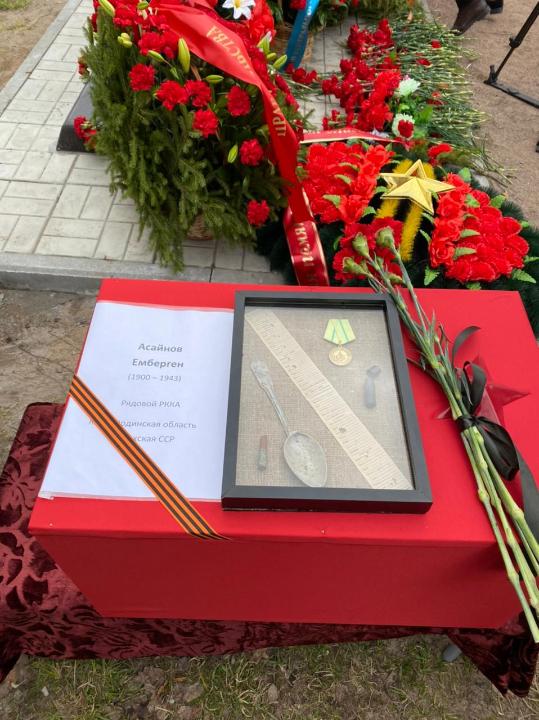 During the opening ceremony, the remains of the Red Army soldier Embergen Asainov were transferred to the Kazakh delegation. The remains of the soldier were found by the Russian Opora (support) search group in the Kirovsky district of the Leningrad region and will be delivered to the grandson of the hero living in Baikonur.

The next day, Kazakh Ambassador to Croatia Tolezhan Barlybaev met with the head of the Croatian Association of Memory Damir Yasharevich, who is engaged in searching for military graves and establishing the names of killed and missing persons of World War II. 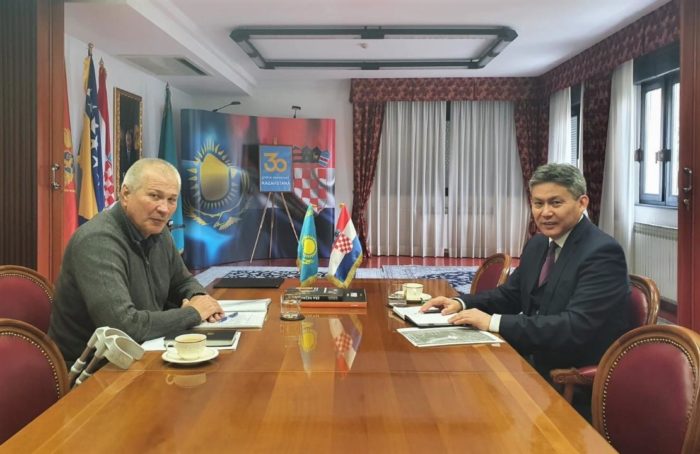 Barlybayev and Yasharevich discussed the construction of the Memorial Park of Friendship at the site of the mass grave of Soviet soldiers in the Shtrigovo village. The official opening of the complex is scheduled for autumn of 2021. An agreement was reached to continue joint work to establish the names of soldiers and officers buried in mass graves on Croatian territory.

On May 9, a commemorating ceremony was held at the Victory Monument in the Batina village with the participation of the Embassies of Kazakhstan, Russia and Azerbaijan, Croatian veterans and anti-fascist organizations, as well as representatives of local authorities and members of the public. 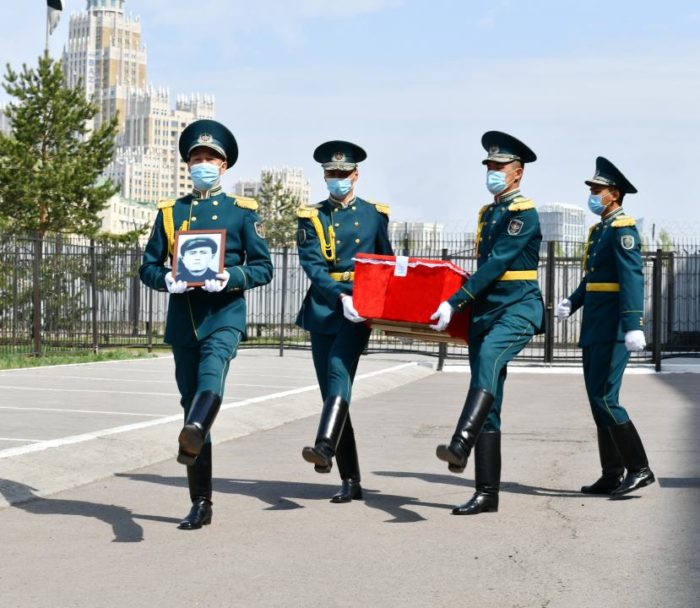 The official ceremony of transferring the remains and military awards of the Kazakh soldier Ivan Cherednik. Photo credit: Gov.kz

As part of the Victory Day celebrations, the Kazakh Embassy in Moldova, and the Pavlodar Maidan Zholy (frontline) search group organized the delivery of the remains of a Kazakh soldier to his motherland on May 8.

The Kazakh Ministry of Foreign Affairs officially handed over the remains and military awards of the Kazakh soldier Ivan Cherednik, who died in 1944 in a battle with the Nazi invaders of the Kokocheni (now Voinescu) farm on the territory of Moldova, to the representatives of the North Kazakhstan Region Akimat (Administration). 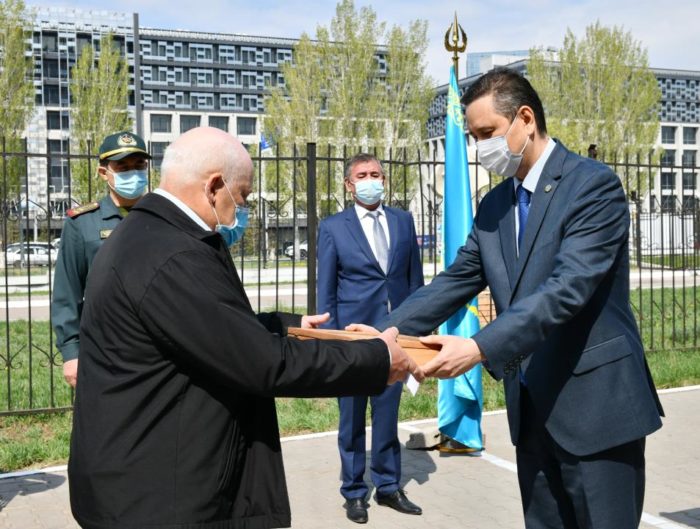 The official ceremony of transferring the remains and military awards of the Kazakh soldier Ivan Cherednik.

The body of the Junior Sergeant Cherednik was discovered at a fraternal military grave of Soviet soldiers during a Moldovan search near the village of Voinescu. The Ministry of Defense of Moldova and the Victory National Coordinating Committee held a ceremony honoring Cherednik with the corresponding military honors at the Unknown Soldier tomb of the Eternity Memorial Complex in Chisinau. 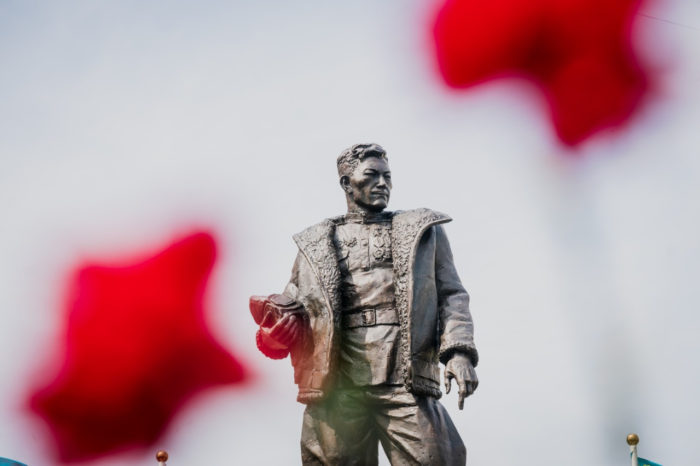 Back in the Kazakh capital of Nur-Sultan, a monument of the twice hero of the Soviet Union and legendary pilot Talgat Begeldinov was also unveiled on May 8, according to the city’s press service.

The bronze and granite monument is located on Saryarka Avenue and was constructed by sculptor Nurlan Dalbai and architect Rasul Satybaldiev. The opening ceremony was attended by Nur-Sultan Akim (mayor) Altai Kulginov, Minister of Defense Nurlan Yermekbayev, relatives of Talgat Begeldinov, deputies of the Mazhilis of the Kazakh Parliament, and members of the city Council of Veterans. 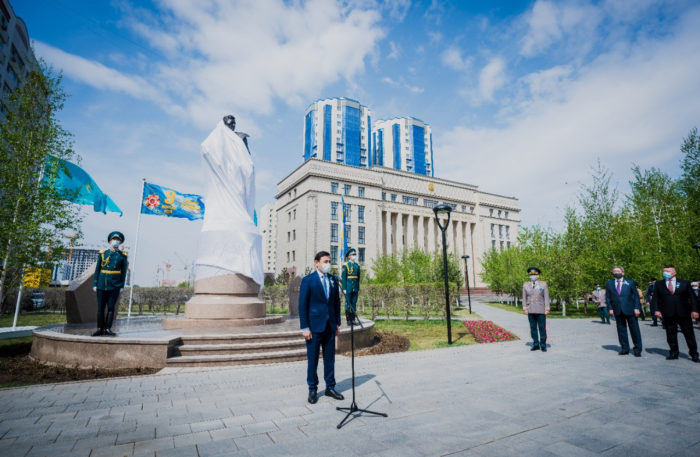 The unveiling ceremony of the Talgat Begeldinov monument.

“Veterans of World War II are an example of heroism and resilience of the older generation, which offers a lesson on courage and glory for the younger generation! Due to our ancestors, we have a peaceful sky over our heads! It is our duty to honor the memory of the heroes,” said Kulginov.