Close to 1.8 Million People Immunized Against COVID-19 in Kazakhstan

NUR-SULTAN – As of May 14, 1,790,356 people in Kazakhstan have received at least one dose of the vaccine against COVID-19, according to the data updated daily by the Kazakh Ministry of Healthcare. 722,504 of them have been fully vaccinated against the virus. 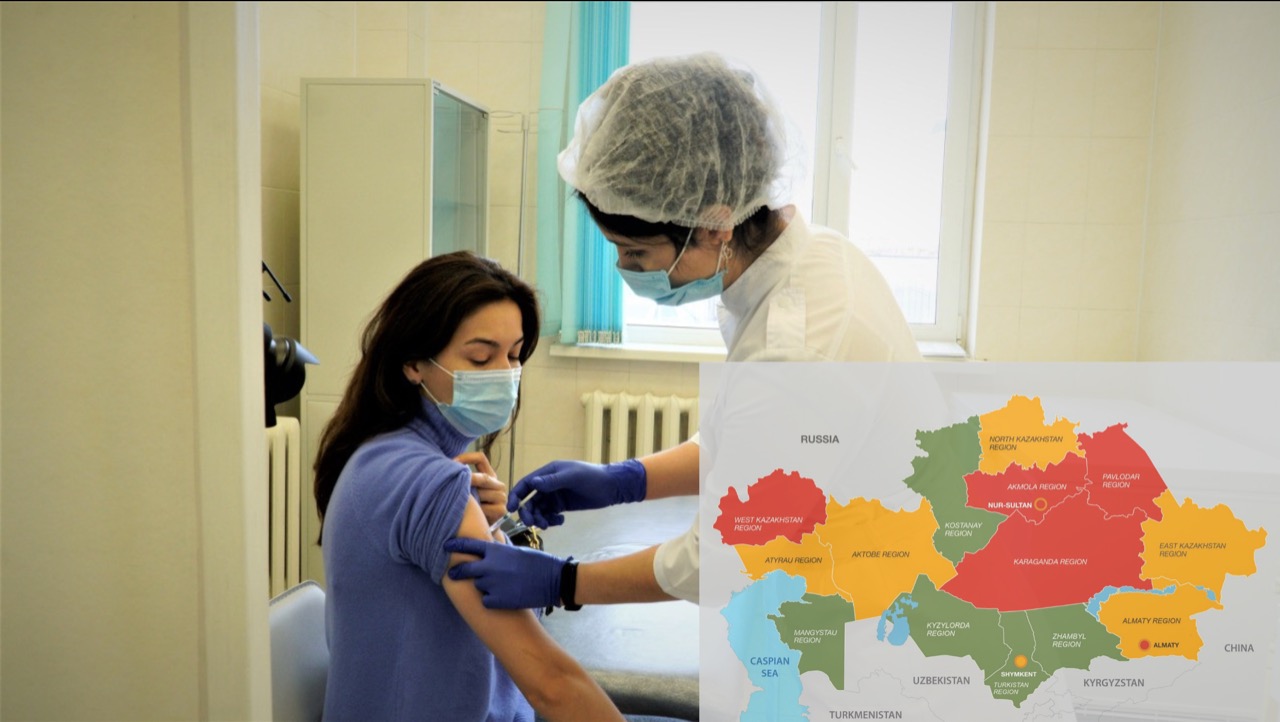 Citizens can choose what vaccine thye prefer to be injected with. CPhoto credit: astana.gov.kz. Click to see the map in full size.

Almaty city, Almaty Region and the Turkistan Region are leading in terms of the number of people receiving the first dose of vaccine, with 265,760 people, 187,209, and 167,853 respectively.

This, however, falls behind the government plans announced in April.

“In April, May, and June, two million people will be vaccinated each month in the regions. In September, we plan to complete the vaccination of 10 million people who are subject to vaccination. And then we expect to get the cumulative effect of herd immunity,” said Kazakh Prime Minister Askar Mamin in April.

Since February, Kazakhstan has been using the Russian vaccine produced at a Karaganda-based pharmaceutical plant and began administering the QazVac vaccine developed by the Kazakh Biosafety Research Institute from April 26.

Similar to Sputnik V, QazVac is a two-dose vaccine administered within a 21-day interval. The first batch of 50,000 doses was dispatched to the nation’s single SK Pharmacy hub on April 23 and then distributed to the regions. Another 50,000 doses are expected to be produced in May.

“There is no shortage (of vaccines). We are adequately supplied with vaccines. I think that the pace of vaccination itself will accelerate as well. 2.3 million doses have been delivered. You know that it is impossible to administer the second component without the first. So it was important to be able to distribute the first and second components to the areas to support the vaccine rollout,” said Kazakh Minister of Healthcare Alexey Tsoy at a May 5 press briefing.

Overall, there have been 353,140 coronavirus cases and 53,884 coronavirus pneumonia cases since the first case was reported in Kazakhstan on March 13, 2020.

According to the matrix of the epidemiological situation in Kazakhstan, as of May 14, the cities of Nur-Sultan and Almaty as well as Akmola, West Kazakhstan, Karaganda and Pavlodar regions are in the red zone.

Shymkent city and Almaty, Atyrau, Aktobe, East Kazakhstan, and North Kazakhstan are in the yellow zone, while the Zhambyl, Mangistau, Turkistan, Kostanai, and Kyzylorda regions are in the green zone.

Nur-Sultan city has been in the red zone for the past two months. City officials describe the situation as unstable and recommend people to avoid crowded places.