Bokeyorda Nature Reserve to Be Built In West Kazakhstan

NUR-SULTAN – Kazakh President Kassym-Jomart Tokayev confirmed a decision to create the Bokeyorda and Ashiozek nature reserves with a total area of 657,000 hectares after a meeting with the Kazakh Minister of Ecology, Geology and Natural Resources Magzum Mirzagaliev, reports the Akorda press service. The reserves are expected to facilitate the migration of a part of the Ural saiga population to the Zhaiyk river’s left bank. 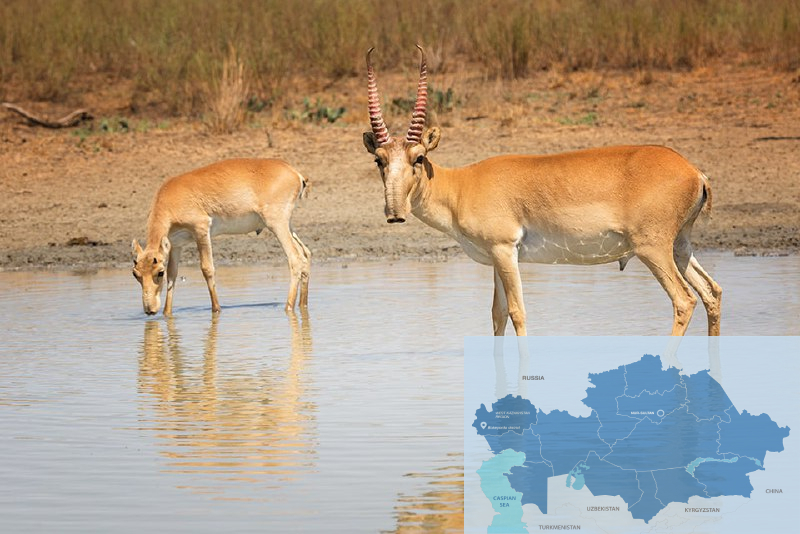 More than 95% of the world’s saiga population lives in Kazakhstan. Click to see map in full. Photo credit: Gov.kz.

The executive decision comes after Mirzagaliev visited the West Kazakhstan region on behalf of the President and is part of the measures being taken to protect the saigas from extinction. Due to the effective fight against poaching and strengthening of legislation, the saiga population has grown from 334,400 to 842,000 in 2 years, according to the results of a recently conducted census.

The new nature reserves will fit into the national policy framework of developing sustainable tourism in the country. In addition to establishing new reserves, Kazakh national parks are undergoing improvements in their infrastructure. At the meeting, Mirzagaliyev shared that investors have been identified for 4 large national park projects with a total investment between them of more than $72 million.

Additional results of the work against poaching include the Bekira, Nerest (Spawning) and Chisty Vodoem (Clean Water Body) fish protection campaigns. The campaigns led to an increase in poaching criminal cases and fines, as well as the seizure of almost 300 kilometers of nets and several vehicles.

Mirzagaliyev also reported on the work that has been carried out to prevent water shortages, including the work done in cooperation with authorities of neighboring countries, reconstruction of water bodies, digitalization and the provision of the agricultural sector with irrigation water. Thus, an agreement was reached with Kyrgyzstan on the additional discharge of water from the Toktogul reservoir and on the schedules for water supply in the Shu and Talas river basins of the Zhambyl region. Negotiations with Russia are currently underway to increase the discharge of water from the Iriklinsky reservoir into the Zhaiyk River.

President Tokayev was also briefed on the progress of the national plan to plant 2 billion trees, which has resulted in 80 million trees having been planted to date. The President concluded the meeting by highlighting the need to keep water resource regulation under special control and to strengthen the fight against poaching.