By Zhanna Shayakhmetova in International on 20 May 2021

NUR-SULTAN – The United Nations Staff Officer course kicked off on May 19 at the Peacekeeping Training Center in Almaty, according to the press service of the Kazakh Ministry of Defense. 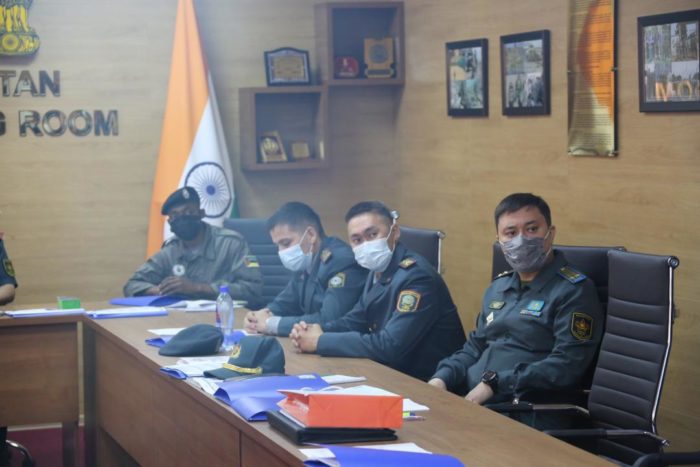 Some 25 military personnel are taking part in a two-week international course. The program aims to prepare the participants for duties involved with a peacekeeping operation.

Head of the Peacekeeping Training Center Colonel Bauyrzhan Nigmetullin said that Kazakhstan pays attention to international peacekeeping efforts and the training of future peacekeepers. Despite pandemic-related restrictions, the center managed to organize this course for the soldiers and officers.

In addition to the military personnel of the Armed Forces of Kazakhstan, representatives of the National Guard, the Ministry of Emergency Situations and participants from the U.K., Spain, Kyrgyzstan and Mozambique attended the program.

The course covers the issues related to the structure, principles and procedures of the UN, the legal framework governing peacekeeping, planning and decision-making processes, the functions of departments and services of international headquarters in missions. The program also includes practical work in subgroups on simulated scenarios.

Participants will receive international certificates confirming the completion of training as a staff officer at the end of the course.

President Kassym-Jomart Tokayev highly appreciated the efforts of the Kazakh peacekeepers during the first comprehensive peacekeeping exercise of the Kazakh Armed Forces, which took place on Oct. 8, 2020. Tokayev noted the importance of preserving peace and stability not only in Kazakhstan, but across the world.  Kazakhstan’s peacebuilding activities reflect the nation’s commitment to peace, global security and stability.

The 120-troop Kazakh peacekeeping company participated in the United Nations Interim Force in Lebanon (UNIFIL) mission from October 2018 to May 2019, a second 120-member unit remained from May to November, 2019, and the third peacekeeping group has been on its mission since November 2019.

The fourth peacekeeping contingent, which performed its duties since August 2020, returned to Kazakhstan this March and the fifth contingent has started its duties. The peacekeepers are based at one of the UNIFIL bases in South Lebanon on the border with Israel as part of the Indian peacekeeping battalion. The officers together with the Indian blue helmets carry out about 50 tasks daily including patrolling the area, organizing observation posts, checkpoints and participating in other mission activities.

The UNIFIL mission is the UN peacekeeping force deployed in southern Lebanon on the border with Israel with a six-month extension in accordance with UN Security Council Resolution No. 425 of March 19, 1978.