Studying the Caspian Seals is Magic for Me, Says Kazakh Ecologist Assel Baimukanova

NUR-SULTAN – For Kazakh ecologist Assel Baimukanova, studying and protecting the Caspian seal has turned into a life journey following the steps of her father, Mirgaliy Baimukanov, who devoted his life to studying the Markakol Lenok. Baimukanova, who works at the Kazakh Institute for Hydrobiology and Ecology and who is among the nation’s 100 New Faces, shared her story in an interview with The Astana Times.

The Caspian seal is a unique marine mammal and it is found nowhere else in the world, but in the Caspian Sea bordered by Azerbaijan, Iran, Kazakhstan, Russia, and Turkmenistan. Its population has rapidly declined by almost 90 percent and the population is now down to around 100,000 due to both human-induced and natural factors driving their extinction, including unsustainable commercial hunting and toxic emissions in the sea.

Why did you decide to devote yourself to studying and protecting Caspian seals?

I have had the interest since childhood and my father was the person who motivated me to study Caspian seals. I am very close to nature and I want to be in harmony with it and I see those horrifying adverse consequences that humans incur on wildlife, how people deprive animals of their habitat, and it frightens me. I have always thought about animal protection and the idea to study them came up when I first saw seals with their big eyes and insecurity on ice and land, how it could not defend itself against people and protect itself and how it is important to the Caspian Sea. I remember seeing seals caught up in fishing nets in 2015 and that is when my life changed.

I love watching seals, hearing them and capturing them on camera, crawling to them and seeing their reaction and my reaction. With all these emotions that you experience near them, these seals seem so close that I am always looking forward to that moment when I see them again. For me, it is magic and studying this species, which is hard to reach, is like a quest and every time we try to do the impossible, but all in all I love it very much.

What are some of the problems that the Caspian seals currently face?

There are many problems, such as shipping, fishing, tourism, Caspian Sea pollution. There are also some reports that seals are hunted for their fat which is reportedly used in the treatment of coronavirus. They also face people’s indifference when they need our protection. We are now trying to promote legislative amendments concerning fishing nets. We and several other organisations have cleaned the shores of Kulaly island from fishing nets since the fall of 2019. We collected nearly three tonnes of fishing nets and also microplastic. We continued this project in the fall of 2020 cleaning the shores of the Tyulenyi islands (seal islands). We walked 11 kilometers to the Kulaly Islands and collected around five tonnes of fishing nets.

What is your most poignant memory from your expeditions?

Every expedition is like a shock because it is very interesting. I remember in August 2017 when we went to the islands in Kendirli Bay, the only habitat of the Caspian seal in the mid-Caspian Sea, it was very hot, there were many snakes and we swam a lot near the rockery. Because the seals swam away, I stayed at their rockery, while my dad left for the shore to take a look through his binoculars. I lied there for half an hour until I noticed some movement and saw seals swimming around me. I was thinking at that moment that I need to grab my camera and capture the moment and I made it. One seal was constantly moving, while another stayed behind me, which I did not notice. I was filming it the whole time and watching them. I thought how happy I was. I then realised that they were forming a seal haul-out site. They usually behave like this, because it is easier to do it when someone is lying on a haul-out site and I guess they confused me with another seal. I still remember that moment. 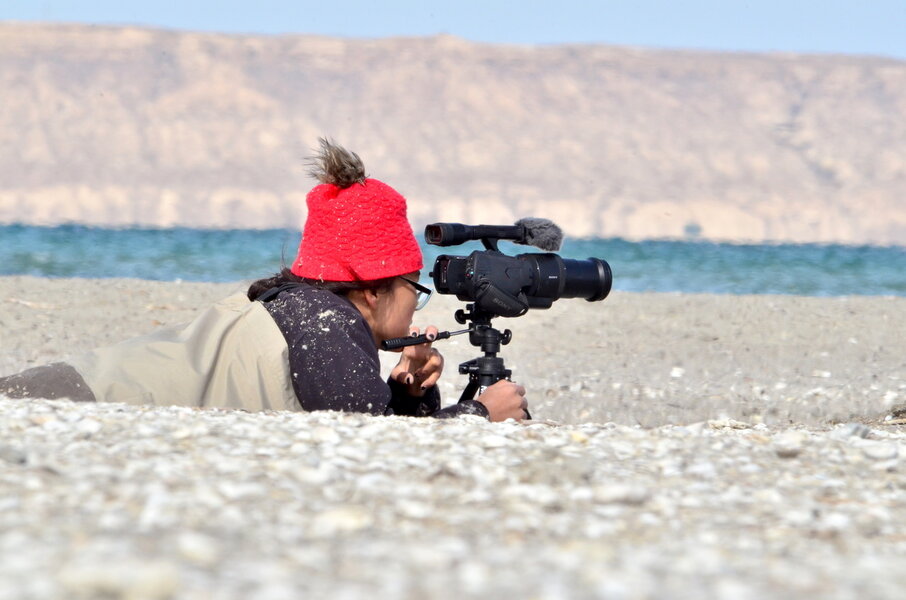 In filming seals, it is important not to deter their usual routine. Photo credit: Baimukanova’s personal archive

How do the preparations for the expedition usually go?

We are now preparing for the expedition and it usually takes around two months. Over the year, we also think about what kind of equipment we take, how we can improve our work and some new techniques that will help us to not frighten the seals. When you work in such conditions, first, you need to take care of your health. In the beginning, I was freezing because I did not know what environment I would be going into and because every person has their own personal needs. For example, I am afraid of the cold and it is very important for me to keep warm, but for my father, who spent years on the field, it is normal and he has adapted.

It is also very important for us to film. We try to crawl close to seals, but try not to deter them. At the same time, we always think of how we can improve our filming and particularly for seal behaviour, it is important to picture them from different angles.

We then buy food products very thoroughly, write a scenario for filming and determine the place based on our previous experiences where we last saw seals and might see them again. Since the end of February, we were able to fly over the area, which also helped a lot.

The expedition team prepares for the trip flying over the area. Photo credit: Baimukanova’s personal archive

How is the work to prevent the extinction of Caspian seals related to growing attention to environmental issues in the country?

I would like to say that as people’s consciousness and mindfulness are rising, these issues are being resolved faster and receiving more attention. I think people should watch what is happening around them and report about it because we all now have the instruments to do so. More people should be involved in caring about the environment. I understand that it is very important and the education of the population plays an important role in improving the environment and saving animals. In the beginning, people used to ask me why I felt the need to protect the seals. These are the sorts of questions that should be clear to people already because all species carry importance not only for themselves but for our own existence. The fact that the state pays attention to environmental problems is very important and when these issues are being addressed with the local communities it is also very important. The more information we have, the stronger we are, and the higher the likelihood future generations will not blame us. The environment is not something mythical or something minor. It is in every breath we take. 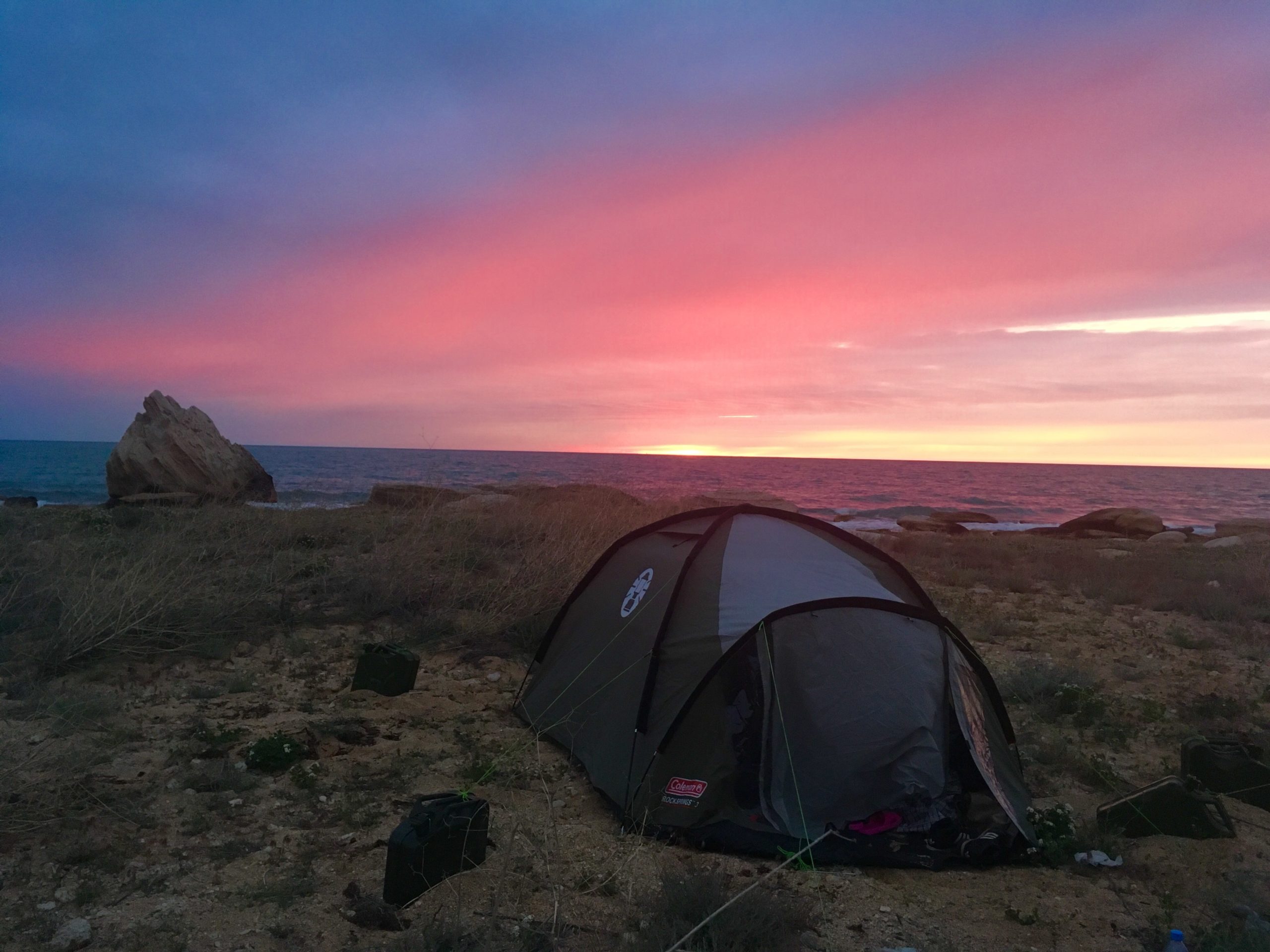