NUR-SULTAN — Kazakhstan began an aerial survey of saigas to determine the number of the species on the territory of the country on April 15. With saiga being included in the International Union for Conservation of Nature’s Red List, it’s not included in Kazakhstan’s Red Book, but hunting for the species is completely prohibited and has major legal consequences. 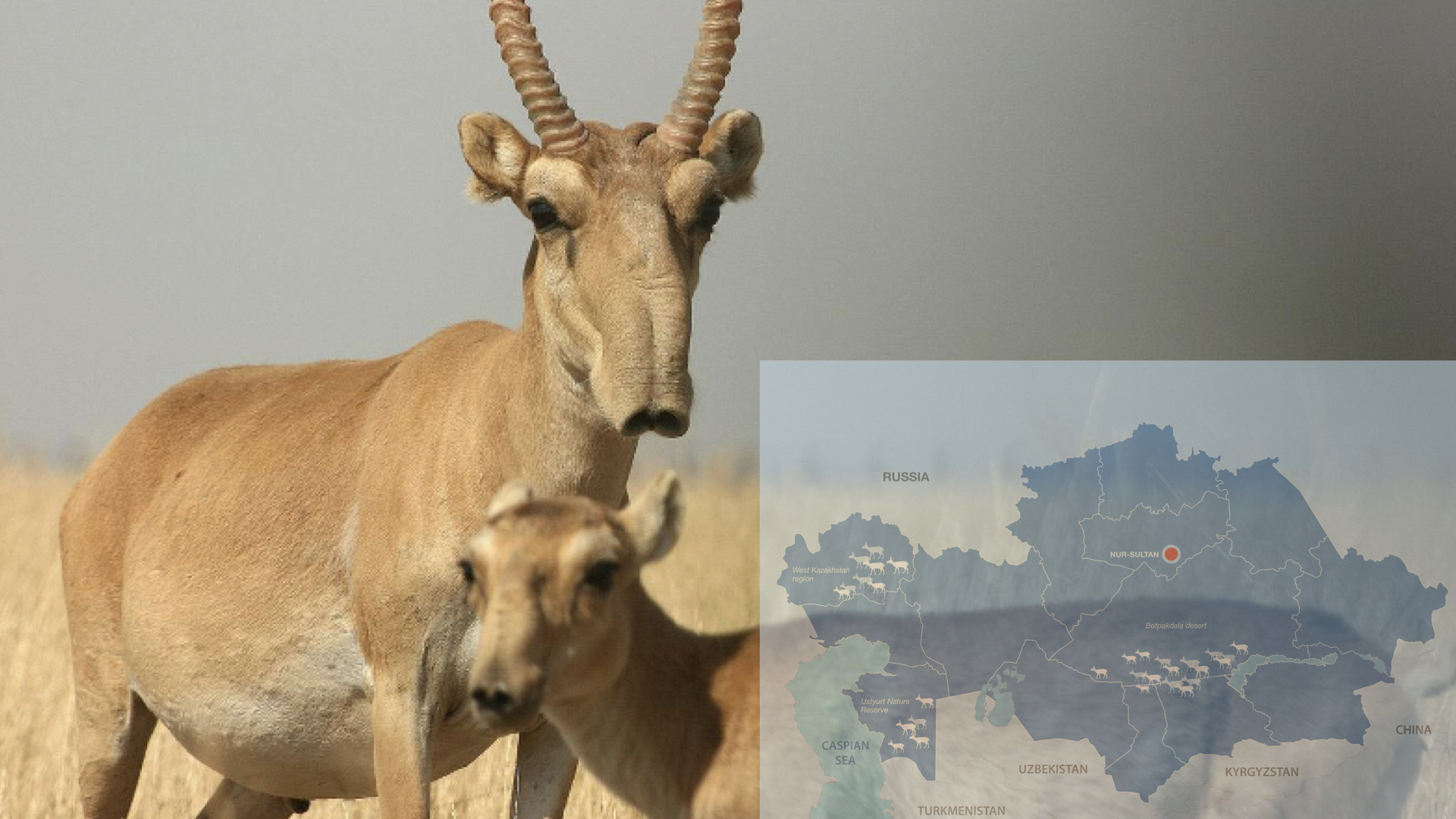 According to the most recent 2019 survey, the total number of the saiga in Kazakhstan amounts to 334,400. Click to see map in full. Photo credits: inform.kz.

The saiga is a small cloven-hoofed animal with a body length of around 110-146 centimeters and a weight of approximately 23-40 kilograms. The species’ yellowish-red fur in warm months is replaced by a thicker light gray fur during wintertime, according to the The Association for the Conservation of Biodiversity of Kazakhstan which has been studying saiga since 2009.

The saiga is easily recognisable by its humped nose. The males have horns growing up to 30 centimeters. The saiga is a migratory animal that easily covers long distances. It can swim across small bodies of water. Their habitat is steppe and semi-desert zones.

“At present there are five main populations of the species, three of which reside in Kazakhstan, one in Russia’s Kalmykia region and another one in Mongolia. Some species winter in Uzbekistan. The Mongolian saiga population belongs to the Saiga tatarica mongolica subspecies, while the other four are the subspecies of the Saiga tatarica tatarica,” states the Association for the Conservation of Biodiversity of Kazakhstan.

Currently the saiga is considered an endangered species. In 1996, the saiga was included in the IUCN’s (International Union for Conservation of Nature) Red List, where since 2002 it is listed as a ‘Critically Endangered’ species.

Saiga’s population in Kazakhstan has decreased rapidly due to intensive hunting and poaching. In just 10 years, from 1992 to 2003, its population plummeted from one million to just over 20,000.

After the implementation of protection measures, the numbers have been gradually increasing, reaching, as of April 2015, about 295,400.

In 2015, there was a sharp decrease in the saiga’s numbers due to pasteurellosis infection after which more than 80 percent of the Betpakdala (desert in the southern region of Kazakhstan) saiga population died of the disease.

In 2020 the aerial survey was not conducted due to the spread of Covid-19.

This year, the first flights of an aerial survey of saigas were launched on April 15 in the West Kazakhstan and Karaganda regions. There are two counting groups: one in the Betpakdala population, the second in the Ural and Ustyurt populations.