By Aizada Arystanbek in Kazakhstan’s Independence: 30 Years, Nation on 30 April 2021 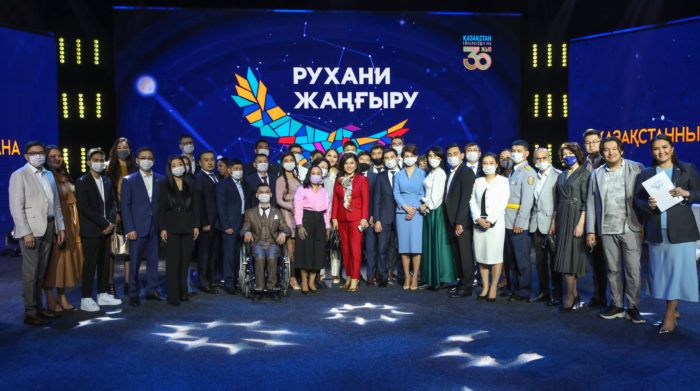 This year, more than 2,500 applications were submitted to participate in the project. Some 30 winners reached the finals. Photo credit: Akorda Press.

The President noted that their talents contributed to the development of Kazakhstan.

“The winners of the project are the people who represent Kazakhstan to the whole world. We pay tribute to the work of our compatriots who have achieved success in different fields. The experience of successful people will always serve as an example for others. The younger generation will follow you. I want to wish every citizen of our country to achieve the same level of success as you,” said President Tokayev.

Kazakhstan’s First President Nursultan Nazarbayev initiated the 100 New Faces of Kazakhstan in 2017 as part of the Modernization of Kazakhstan’s Identity program. Over the next four years, more than 7,500 people participated in the project.

Tokayev highlighted the abilities and dedication of young people who grew up and practised their skills during Kazakhstan’s independence, as well as the importance of programs and organizations fostering social mobility for such talented youth across the country and from different social backgrounds.

Some participants of the project were able to attend the award ceremony in person. Among those were student-volunteer Daryn Abilzhanov, scientist and developer of vaccines for humans and animals Kaisar Tabynov, IT specialist and founder of the robotics school Damir Nurkezhanov, development engineer Sanzhar Taizhan, and young chemistry teacher Ulan Usenov. Akhat Rakishev, the drawing teacher who initiated the construction of the bridge in his native village, and Bulbul Kartanba, the first Kazakh who became the head coach of a hockey club in the U.S. also took part in the event.

Creative industry has become one of the fastest sectors of the Kazakh economy that has been largely possible due to the formation of Kazakh identity, according to the President.

“Our nation has tremendous potential for the development of the creative industry. Currently, the creative economy attracts billions of dollars in investment and it is becoming an important component of sustainable economic growth and social progress. The Kazakh cultural wave is making its way at the regional and global levels. We must competently take advantage of the available opportunities to popularize and promote our culture across the world. Therefore, I call on the government to take comprehensive measures to support this strategically important industry,” said the head of state.

For more effective and sustainable development of innovative ideas, President Tokayev proposed to introduce regular meetings between the finalists of the project with the heads of central government agencies.

“The upbringing of an educated and intelligent generation is the most important task of the state. The country’s future should be in the hands of talented and patriotic youth. I am sure that this is how it will be. To achieve this strategic goal, systematic reforms will continue,” said the President.