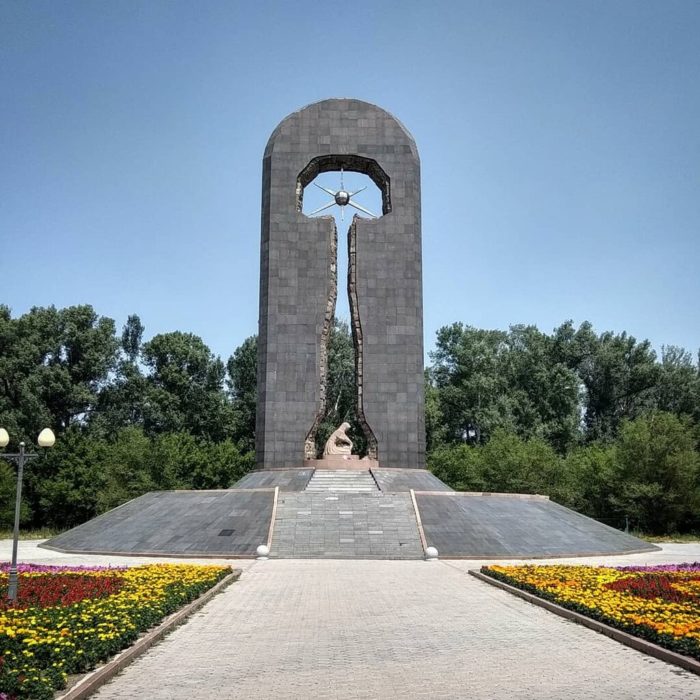 Monument “Stronger than Death” is a memorial to the victims of nuclear tests in Semei.

Kazakhstan is considered one of the world leaders in advocating for banning nuclear weapons to  ensure nuclear safety.

The modern history of Kazakhstan has been closely intertwined with the nuclear issue, starting in 1949, when the first test of atomic weapons took place in the Kazakh steppe. From 1949 to 1989, at least 468 nuclear tests were carried out at the Semei Nuclear Test Site, during which at least 616 nuclear and thermonuclear devices were detonated. The total power of nuclear charges tested on the surface before 1963 was 2,500 times higher than the power of the atomic bomb dropped on Hiroshima.

Almost every third underground test was accompanied by the leakage of radioactive gases from cracks resulting from the explosions.

During the first year of independence, Kazakhstan joined, along with Belarus and Ukraine, the START I Treaty and the Lisbon Protocol. From 1992 to 1995, all nuclear warheads were removed from the territory of Kazakhstan or destroyed at the test site. This is how the world’s fourth largest nuclear arsenal was eliminated.

The country takes part in the work of the International Atomic Energy Agency (IAEA) and in all review conferences of the Treaty on the Non-Proliferation of Nuclear Weapons.

Kazakhstan, with the support of its Central Asian neighbours, initiated the creation of a nuclear-free zone in the region. The Central Asian states signed the Treaty in Semei, in which they committed themselves to ban the production, acquisition and deployment of nuclear weapons and their components or other nuclear explosive devices in the region.

In September 2010, the Kazakh capital hosted the Conference of the Global Initiative to Combat Nuclear Terrorism. The country is also a member of the Proliferation Security Initiative.

In 2010, Nazarbayev in his article “Global Peace and Nuclear Security” proposed to create a  “nuclear club,” which would include the states that de-facto possess nuclear weapons. The club and each of its members must commit themselves to acting exclusively in coordination with the UN Security Council.

In 2012, Kazakhstan initiated the ATOM project, an international awareness campaign that encourages the global community to ban nuclear weapons and their testing. It also defended its position on nuclear disarmament at the 2012 Seoul Summit.

Kazakhstan played an important role in the conclusion of the Iranian nuclear deal by hosting two rounds of negotiations between Iran and the P5+1 in 2013.

At the initiative of Kazakhstan, the UN General Assembly at its 70th Session on Dec. 8, 2015 adopted the Universal Declaration for the Achievement of a Nuclear-Weapons-Free World, co-sponsored by 35 countries.

In that year, the Kazakh government signed a Country Agreement with the IAEA to establish a Low-Enriched Uranium Bank in the east of the country to provide the world with nuclear fuel used for peaceful purposes.

Speaking at the 4th anti-nuclear summit in Washington on March 31, 2016, Nazarbayev defined the central task of mankind as ridding the world of the threat of war as such and to eliminate its causes.

In 2016, the Kazakh capital hosted an international conference “Building a World without Nuclear Weapons” dedicated to the 25th anniversary of the closure of the Semei Nuclear Test Site, where it appealed for others to join Kazakhstan’s initiative.

In 2019, as part of the fifth Astana Club meeting, a new unique international platform was created – the Global Alliance of Leaders for Nuclear Security and a World Free of Nuclear Weapons. As part of this initiative, in 2020, Nursultan Nazarbayev Foundation and the Institute of World Economy and Politics (IMEP), organised a major online conference on international security and the resumption of the global nuclear dialogue.

President Kassym-Jomart Tokayev continues the anti-nuclear position of Kazakhstan’s foreign policy. Speaking at the 75th anniversary of the United Nations in the fall of 2020, President Tokayev made an important observation: in the shadow of the pandemic two more serious challenges are approaching us. One of them is the crisis of nuclear non-proliferation and disarmament.

The changes taking place in the world energy and geoeconomics arena suggest that in the future the role of the nuclear (atomic) factor in global affairs will increase. This process will inevitably affect Kazakhstan, which is a potentially very important player in the nuclear field, with 20-25 percent of the world’s uranium reserves, residual nuclear infrastructure and nuclear industrial facilities and technologies.

The country also occupies an important geopolitical position in the centre of Eurasia, adjacent to two official and two unofficial nuclear powers.

Ultimately, Kazakhstan, as well as many other states, has one goal – to maintain a safe, nuclear-free world for the next generations.

The author is Murat Laumulin, an expert of the Institute of World Economics and Politics (IWEP) under the Nursultan Nazarbayev Foundation.