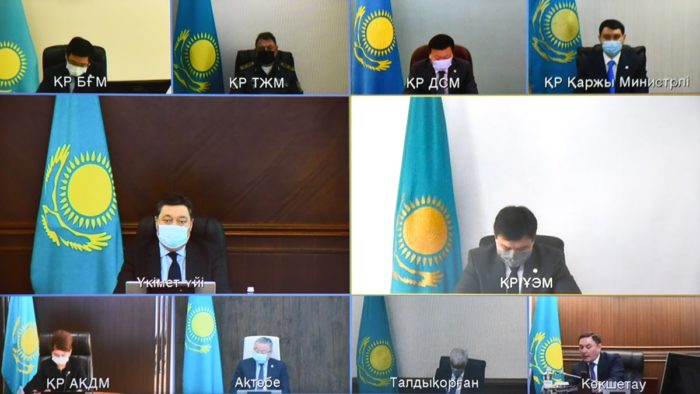 The results of the country’s socio-economic development were discussed at the government session chaired by the Prime Minister.

“We have observed a trend of gradual improvement in the indicators of the basic sectors of the economy. In order to create additional conditions for increasing economic activity, the government will continue to implement comprehensive measures to support businesses,” said Kazakh Prime Minister Askar Mamin at the meeting.

Fixed capital investment, also excluding mining, increased by 34 percent with high investment activity retained across the majority of the regions.

As a result, the GDP growth rate has improved from minus 2.9 percent to minus 1.6 percent  between February and March.

“Despite the serious impact of the global economic crisis, the economy of Kazakhstan is demonstrating a gradual recovery in key indicators,” Mamin said.

Key industries include 7.5 percent growth in manufacturing, 13.1 percent in the construction industry and 2.8 percent  in agriculture. In addition, annual inflation slowed down to 7.0 percent . The information and communications sector, in particular, demonstrated a 9.9 percent growth.

Three regions have demonstrated a downturn in their economic growth: the Atyrau, Turkestan and West Kazakhstan regions.

As for investment activity in the country, the sectors that experienced the most growth in the past three months include the manufacturing industry (by 2.4 times), information and communications (63 percent), agriculture (55 percent), transportation (42 percent), construction (39 percent) and trade (29 percent).

Regions that have exhibited remarkable expansion of investment activity include the Turkestan region, Shymkent and Almaty.

In order to sustain and further stimulate economic growth, the Prime Minister noted the need to reach investment agreements with large companies in priority sectors of the economy to create ecosystems. In addition, conducting spring fieldwork with the effective use of available resources and tools is emphasized for the acceleration of the agro-industrial growth. The roadmap for stabilization of prices for socially significant food products is also expected to help prevent the increase of prices.