By Andrey Dovgolenko in Kazakhstan’s Independence: 30 Years, Society on 5 April 2021

NUR-SULTAN – The Kazakh government has presented its strategic plan for education reforms going into the future. The task is to improve quality of education in the regions and train highly qualified teachers and scholars. 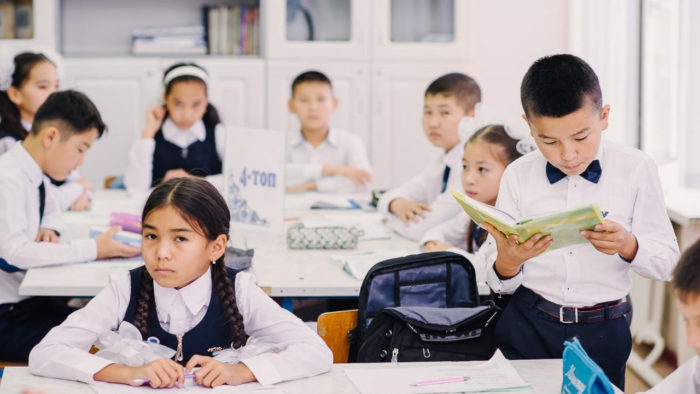 The government expects to open 800 new schools with sports and children’s clubs by 2025.

In addition, an ambitious task has been set for the scientific community of the country: at least three Kazakh universities should enter the Quacquarelli Symonds World University Rankings by 2025. Yet, this is only a small part of the planned reforms within the National Development Plan through 2025.

A while ago, Kazakhstan began to embrace major education reforms.

“School infrastructure that meets modern standards of equipment and ergonomics is the key condition for a decent education. Schools need well-equipped and small classrooms in terms of the number of students. It is important to meet the task of infrastructural development not only at the expense of the state, but we need to attract public-private partnerships as well. Otherwise, given our positive demographic dynamics, we will always be left behind,” President Kassym-Jomart Tokayev said during the third meeting of the National Council of Public Trust back in May 2020.

Tokayev highlighted the importance of ensuring students with high quality education that will become beneficial for the country’s future.

The head of state announced several initiatives Feb. 25 during the fifth meeting of the National Council of Public Trust. Tokayev instructed the government to  provide all schools in the country with free internet access.

Also, the President urged his officials to increase scholarships in medical institutions to tackle the shortage of medical personnel in the country.

“We are increasing salaries for doctors and teachers. Previously, we allocated more scholarships for students studying pedagogy. This step has brought positive results. Therefore, it is also necessary to increase the scholarships for medical students,” the President said.

Quality education as a nationwide priority

Further innovations in education are also prescribed in the recently approved National Development Plan through 2025. This major document was developed on behalf of President Tokayev by the Ministry of National Economy together with the Agency for Strategic Planning and Reforms. This is a road map of cardinal state and sectoral reforms, aimed at building an effective state and a fair society that guarantees the improvement of life quality and the well-being of Kazakhstan citizens.

“Decent education is a national priority,” the document reads. The priority implies “the development of human capital to implement the new course of the country’s modernization.”

Kazakhstan’s officials set the goal of reducing the gap in the quality of education between the major cities and the regions by providing educational institutions with the latest equipment and professional staff.

Preschool education is under special supervision. Kindergartens will accept all children, especially those children whose parents belong to socially vulnerable groups. In addition to kindergartens, Kazakhstan will develop the institution of educators at home (“social nanny”). All educational institutions will create conditions for an inclusive education.

To support socially vulnerable groups and young people from families with low incomes, the students will be able to get concessional loans to pay for their higher education.

By 2025, Kazakhstan is supposed to open 800 new schools with sports and children’s clubs. All buildings will be equipped with computers with free internet access. Digital institutes of continuing education will be created to implement integrated programmes of higher, postgraduate and additional education.

The National Plan provides for a special approach to training qualified teachers and scientists. Young scientists will have the opportunity to undertake internships in the world’s leading scientific centers and get grants to finance research. In the coming years, Kazakhstan plans to allocate 500 grants to scientists for internships abroad and provide 1,000 more grants to young scientists.