By Zhanna Shayakhmetova in International on 7 April 2021

NUR-SULTAN – The Hungarian Minister of Foreign Affairs and Trade Péter Szijjártó paid an official visit to Kazakhstan on April 6 to reaffirm Hungary’s readiness to strengthen cooperation with Kazakhstan.

Tokayev noted that the Kazakh-Hungarian strategic partnership is based on credible political dialogue, trade, economic and investment cooperation, and mutual support amid the COVID-19 pandemic. 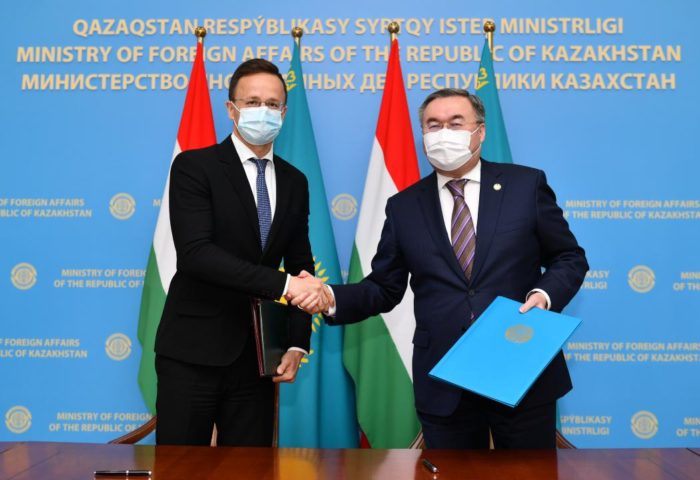 Kazakh President expressed gratitude to Prime Minister of Hungary Viktor Orbán for his participation in the recent Informal Turkic Council Summit, which was held in Turkistan.

“I believe that the negotiations will be very much positive in terms of giving an additional impetus to the development of relations between both Kazakhstan and Hungary. Hungary is the first country in your part of the world where Kazakhstan has opened its first embassy as early as 30 years ago. We have a special relationship. Hungary is very popular in Kazakhstan, within the people, and they are very sympathetic,” said Tokayev. 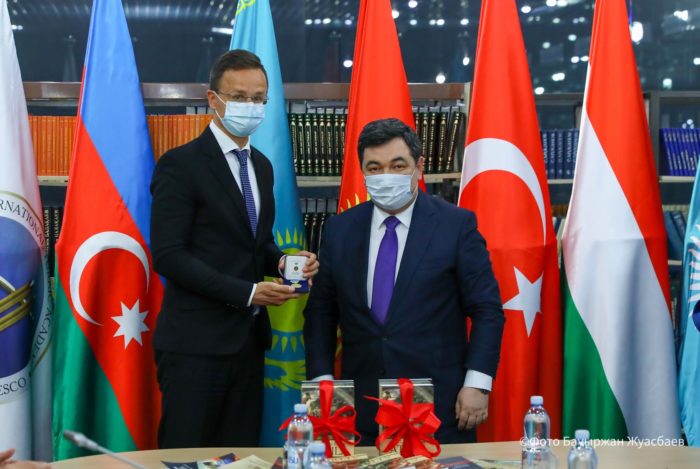 Szijjártó reaffirmed Budapest’s readiness to further cooperation with Kazakhstan, including using the potential of the Turkic Council and noted the important role of Turkistan as a spiritual capital.

“We really feel that Kazakhstan and the people of Kazakhstan are friends of the Hungarians, even more than that brothers. We would like to underline that the fact that we joined the Turkic Council was to a big part thanks to the strategic relationships we have built with Kazakhstan,” Szijjártó said.

The book about the legendary ruler of the Huns Attila “The Lord of Europe Attila” and the first collection of poems by Kazakh poet Zhambyl Zhabayev in the Hungarian language took place.

Among other things the Hungarian FM was informed that Kazakhstan has started its mass vaccination campaign among the population with Russia’s Sputnik V coronavirus vaccine authorized there.

President Tokayev received a Sputnik V vaccine produced by the Karaganda pharmacy factory on April 6, according to the President’s spokesperson Berik Uali. Minister Szijjártó said that he had already passed the first stage of vaccination. Deputy Prime Minister and Foreign Minister Mukhtar Tileuberdi will be vaccinated in the coming days.

The Deputy Prime Minister and Foreign Minister Tileuberdi met with the Hungarian Minister.

“Hungary is our closest ally, the only country in the Central and Eastern Europe region that has established a strategic partnership with us. Hungarians are a fraternal nation for us,” said Tileuberdi at a briefing at the ministry.

The officials discussed a number of international issues including those related to the simplification of the European Union visa regime for Kazakh citizens.

“The cooperation in the field of energy, water management, education, the use of the transit and transport potential of the Visegrad Group (the countries of the Central-Eastern Europe) and Central Asia are of special attention. The office of the Export-Import Bank of Hungary has been opened today at the Astana International Financial Center (AIFC). This will expand the opportunities of Hungarian companies in the Central Asian region,” said Tileuberdi.

“The number of students interested in learning the Hungarian language is growing. We are also glad to see Hungarian students studying the Kazakh language in Hungarian universities. We are confident that young people will become a ‘living bridge’ connecting our countries in the future,” said the Kazakh minister.

A Visit to the International Turkic Academy

The academy has implemented projects devoted to the heritage and teachings of Hungarian Turkologists with the mission to integrate Hungary and the Turkic world.

President of the International Turkic Academy Darkhan Kydyrali presented the Gold Medal of the Academy to the Hungarian Foreign Minister and expressed gratitude to the Hungarian delegation for their participation in the presentation of the works and exhibition.

Kydyrali noted the importance of the meeting in the Turkic Library named after the famous Hungarian turkologist Istvan Kongur Mandoki. As a turkologist and researcher, Mandoki studied the ancient history of the Hungarian tribes and the Cumans (Polovtsians), the Turkic-Madyar connections. Mandoki was buried in the Kensai cemetery in Almaty.

On this day, the book about the legendary ruler of the Huns Attila “The Lord of Europe Attila” created by Ambassador of Hungary to Mongolia Borbala Obrusanszky and the first collection of poems by Kazakh poet Zhambyl Zhabayev in the Hungarian language took place.

In 2017 Hungary received observer status at the International Turkic Academy and became a first country among the institutions of cooperation of the Turkic world.

Hungary is an important and promising trading partner in Eastern Europe for Kazakhstan, said Kazakh Minister of Trade and Integration Bakhyt Sultanov during the meeting with Foreign Minister Szijjártó.

According to the ministry, the trade between Kazakhstan and Hungary increased by 9.7 percent and reached $111.8 million at the end of 2020.

Kazakhstan has offered proposals for mutual trade and a list of potential goods worth $302 million for diversification between the countries.

More than 60 organic product manufacturers in Kazakhstan are focused on growing oats, flax, sunflower and medicinal herbs. Some of the companies are currently being accredited by authorized bodies in the EU.

Kazakhstan also serves as a transit country for Hungary for the delivery of export-import products from China by land transport in container trains. Regular container trains run from the cities of China, Xi’an, Shaanxi and other cities, and in the opposite direction through Kazakhstan and Ukraine.