From History to Modernity: Kazakh, Russian Scholars and Diplomats Hold a Conference in Moscow

By Dmitry Babich in International, Kazakhstan’s Independence: 30 Years on 22 April 2021

MOSCOW – East and West, Europe and Asia, history and modernity: both Russia and Kazakhstan are unique countries that bring these seeming opposites together, showing the world a special kind of Eurasian harmony and peace-loving attitudes. 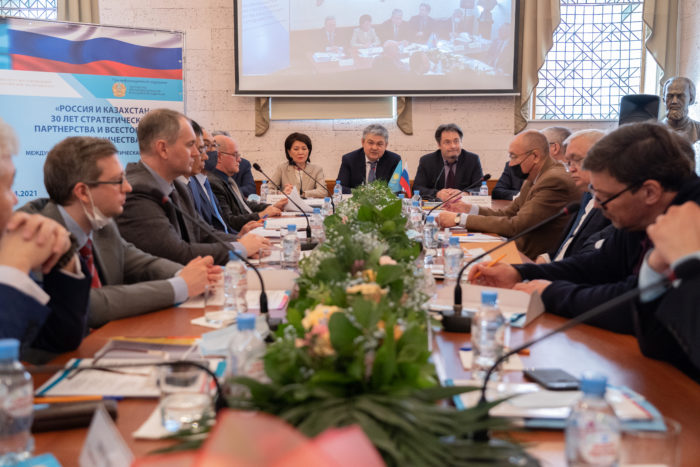 Director of the KazISS Zarema Shaukenova (L), Ambassador of Kazakhstan to Russia Yermek Kosherbayev (C) and Director of the Institute of Oriental Studies Alikber Alikberov (R) and deputies of Kazakh Majilis and Russia’s State Duma, scholars and journalists from the two countries took part in the off-line conference. Photo credit: Adil Sariev/Press service of the Embassy of Kazakhstan in Moscow.

This unique mixture of cultures and civilizations gave a special flavor to the scientific conference “Russia and Kazakhstan: 30 years of Strategic Partnership and Multifaceted Cooperation.”

The conference was held in Moscow, on the premises of the Institute of Oriental Studies, which is a part of the Russian Academy of Sciences. It was co-hosted by the Kazakhstan’s Institute for Strategic Studies under the President of Kazakhstan (KazISS). 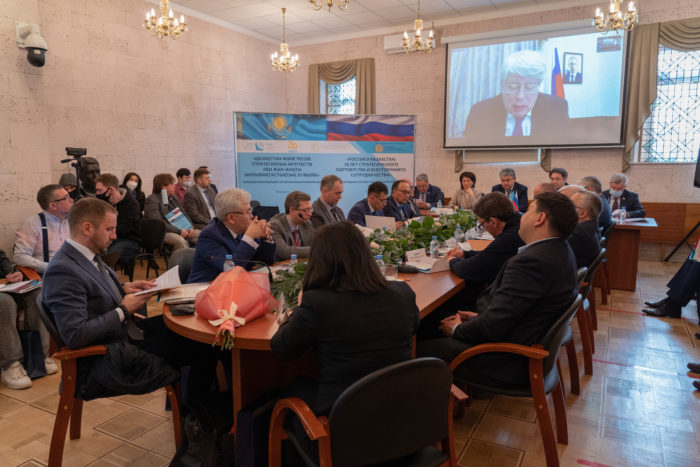 Russian Ambassador to Kazakhstan Alexey Borodavkin addresses the conference from Nur-Sultan. Photo credit: Adil Sariev/Press service of the Embassy of Kazakhstan in Moscow.

Ambassador of Kazakhstan to Russia Yermek Kosherbayev and Russian Ambassador to Kazakhstan Alexey Borodavkin were officially supposed to be called “excellencies,” but this form of diplomatic etiquette was obviously redundant at this conference of good colleagues  and professionals. Both diplomats, with their scientific degrees, felt very much in their element in the familiar surroundings of professors (one of whom was a teacher of Ambassador Kosherbayev 30 years ago), experts and journalists. 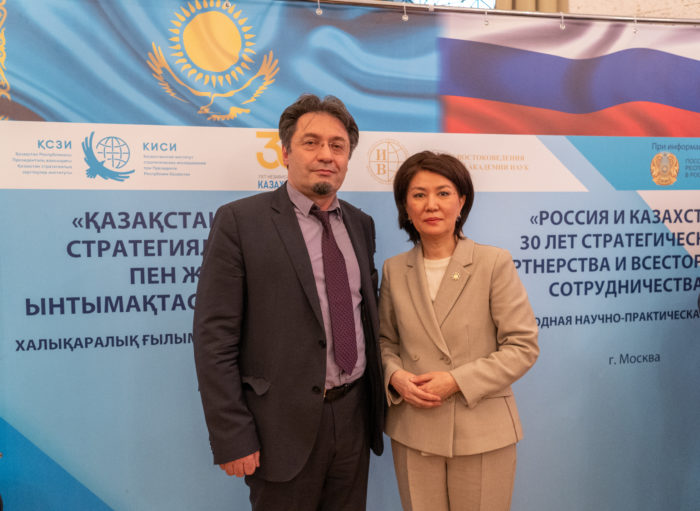 Russian ambassador Borodavkin in his speech explained why Kazakhstan’s achievements of the Soviet period of its history had a crucial positive influence on the whole world. Borodavkin singled out three of these achievements:

1. Kazakhstan’s sons and daughters not only played an important part in the defeat of German Nazism during the World War II, but, what is most important, in 1941 precisely the army units formed in Kazakhstan prevented the occupation of Moscow by the advancing German troops, thus saving the world from the prolongation of the war and numerous additional casualties in Europe, Asia and the United States.

2. Humanity stepped into its space epoch from the Kazakh soil. It was from the Kazakh town of Baikonur that the first man in space, Yuri Gagarin, started his space flight in 1961, 60 years ago. Numerous other achievements  of humanity in space would have been unthinkable without Kazakhstan as a whole and Baikonur in particular.

3. By its sacrifice and sometimes even martyrdom in the process of the creation of Soviet nuclear weapons Kazakhstan assisted in the creation of “strategic balance” between the Soviet Union and the West, thus preventing an eventual World War III in the twentieth century and even until now.

Borodavkin’s colleague, Kazakhstan’s Ambassador to Russia Kosherbayev noted the importance of the bilateral treaties on friendship and cooperation signed by Kazakhstan and Russia starting from the 1990s. The ambassador noted that the traditions of scientific cooperation between Russia and Kazakhstan are continued by more than 60 thousand Kazakh students currently studying in Russian institutes of higher education.

Scholars from KazISS, headed by Institute’s Director General Zarema Shaukenova, developed some of the ideas raised by the Russian and Kazakh ambassadors and voiced their own opinions.

The speech by Bulat Sultanov, the former director of KazISS (until 2014) and one of the main authorities on relations between Kazakhstan and the European Union, as well as Kazakhstan and Russia, was particularly impressive.

Sultanov noted that Kazakhstan became the motherland of the idea of Eurasian integration, providing an opportunity for peaceful economic and cultural exchange between countries of Europe and Asia. This idea, first voiced by Kazakhstan’s First President Nursultan Nazarbayev, on its initial stage presupposed economic cooperation between the former republics of the Soviet Union.

In his speech, professor Sultanov spoke against any dividing lines, which would cut Russia from Western Europe or China from its western neighbors, as it had been the case, unfortunately, for much of the 20th century.

“We are against any future form of a “cordon sanitaire” that would prevent Eurasian integration,” professor Sultanov stressed in his speech.

Professor Sultanov’s wise conclusions were backed up by the wealth of historical knowledge on historic ties between Russia and Kazakhstan, provided by several history scholars who took a word at the conference.

The most memorable was a presentation by Vadim Trepavlov, the head of the Center for Studies of the Ethnic Groups at the Russian Academy of Sciences. He unfolded before his listeners the history of “cultural penetration” of European ideas into Kazakh society, where “children of khans” read French literary novels back in the early 19th century. Here is what Trepavlov said:

“It should be noted that Kazakh society itself wanted to absorb the best in European culture, so European education of the people like national poet Abai was not a ‘gift’ of the Russian empire, but the result of Kazakhs’ own choice. Kazakhs themselves adopted European cultural patterns, interweaving them with their own ancient traditions.”

For example, an 18th century Kazakh ruler Ablai-khan, in his letter to the governor of the Russian province of Orenburg, specifically asked the governor to let it be known to the Russian empress Catherine the Great that “ we are all born equal.”

What a touching and still actual “view from the past”!