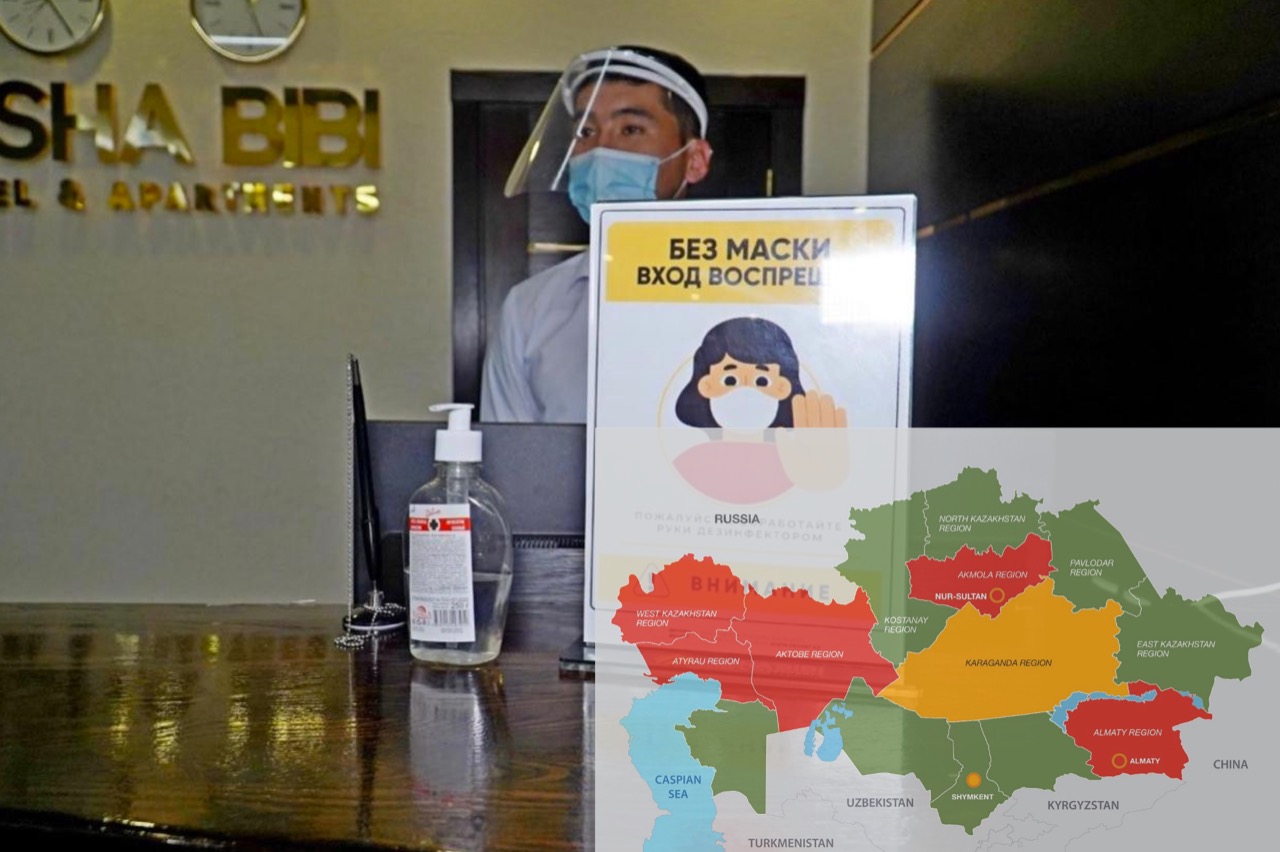 To increase the number of vaccination venues, trade centers and hotels in Nur-Sultan offered their venues. Photo credit: astana.gov.kz. Click to see the map in full size.

“As of April 6, 256,837 COVID-19 and 50,839 cases of coronavirus pneumonia have been registered in Kazakhstan. According to the epidemiological situation assessment matrix, seven regions – the cities of Nur-Sultan, Almaty as well as Atyrau, West Kazakhstan, Almaty, Akmola, Aktobe oblasts – are in the red zone. At the same time, the cities of Almaty and Nur-Sultan have been in the red zone for 28 days,” said Tsoy.

The city of Shymkent and the Karaganda Region are in the yellow zone. All other regions are in the green zone.

At the moment of writing, over the past day, the nation confirmed 1,809 new cases.

As of April 6, 28,333 people continue receiving treatment and 132 patients are in an extremely severe condition, while 77 patients are connected to a medical ventilator.

Tsoy said all additional resources will be mobilized in case the cases continue to increase. The ministry has developed an electronic system to monitor hospital bed occupancy at each medical organization in the region.

“The regions have a plan for deployment of infectious disease hospital beds when the load reaches 70 percent of their capacity. The number of infectious hospital beds was increased from 51,000 to 60,000. Reserve facilities will be involved, while the provision of planned specialised medical care will be continued,” he said.

Kazakhstan is currently witnessing the realistic scenario forecasted by the ministry at the beginning of the year. At last week’s meeting chaired by President Kassym-Jomart Tokayev, Tsoy spoke about the ministry’s updated scenarios for the epidemiological situation given the confirmed new variants in Kazakhstan.

He assured the president that the nation’s health system is able to cope with the load in a realistic scenario.

“Restrictive measures are therefore taken locally and differentiated at both the national and regional levels,” he added.

Following last week’s meeting chaired by President Tokayev that criticised the slow pace of vaccination, the government is taking steps to gear up mass vaccination.

Kazakh Prime Minister Askar Mamin said the government will ensure up to two million citizens will be immunised monthly starting from April and they plan to immunise 10 million people by the end of September.

“That is when we expect the herd immunity to develop,” said Mamin.

As of April 6, 194,706 people received the first dose of the Russian Sputnik V vaccine currently produced at the country’s Karaganda-based pharmaceutical plant. 72,110 of them have been fully immunised.

The Kazakh Ministry of Digital Development, Innovation and Aerospace is also developing an electronic vaccination passport that includes the date of the vaccination, the hospital where it was done and the doctor.

Citizens who received the full course of the vaccination can access the document in the electronic government system.