By Zhanna Shayakhmetova in International on 18 April 2021

NUR-SULTAN – The Association of Kazakh people has been founded in Japan, reported the press service of the Kazakh Ministry of Foreign Affairs. 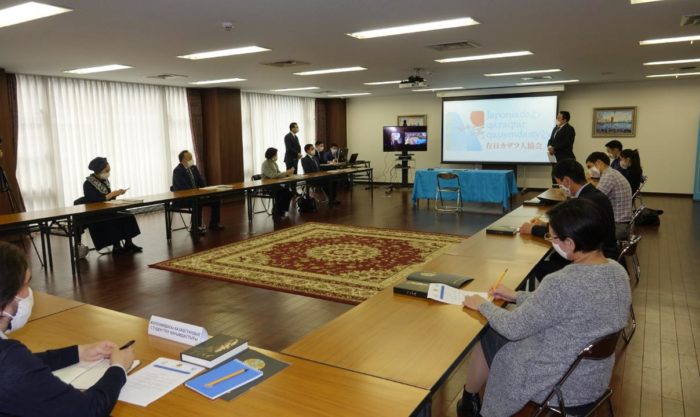 The inaugural meeting of the Association of Kazakh people took place on April 14 in Tokyo. Photo credit: Gov.kz.

The association has a mission to bring together the Kazakh nationals and ethnic Kazakhs living in Japan to maintain mutual contact and support. Its activities include establishing cooperation between entrepreneurs, cultural and humanitarian projects, and information support.

During the April 14 inaugural meeting, Kazakh Ambassador to Japan Yerlan Baudarbek-Kozhatayev said that “amid the COVI-19 pandemic, the Kazakhs living in Japan had demonstrated their unity and joined efforts to provide humanitarian assistance to the people of Kazakhstan, which led to the idea to set up an association.”

Also, the Association of Kazakhs in Japan and Otandastar (Compatriots) Foundation signed an agreement at the event that took place in Tokyo. The Otandastar Foundation provides support to ethnic Kazakhs living abroad and compatriots who left Kazakhstan for permanent residence in foreign countries.

Magauiya Sarbasov, Vice-president of the Otandastar Foundation, said that it is important to expand ties with Kazakhs abroad, to inform them about the foundation’s programs to help preserve their linguistic and ethnocultural identity while they live in foreign lands.

According to Kazakh Embassy in Japan, some 191 Kazakh nationals and approximately 70 ethnic Kazakhs from China, Mongolia, and Uzbekistan live permanently in Japan for work or study. The Association of Kazakh Students in Japan has also operated in the country since 2018. The organization helps students adapt to everyday life, academic processes, and the socio-cultural environment.

Nurdana Adylkhanova, an IT specialist at the Japanese IT company, believes that the organization’s activities will be useful for those who want to learn more about Kazakh communities and find new friends.

Adylkhanova studied at the school in Hiroshima in 2010 as part of the Hiroshima-Semei project. Last year, she was invited to join the Tokyo-based IT company and moved to Japan in 2021.

“I speak fluent Japanese and know their culture. I have many friends here. So I have never experienced any cultural barriers or difficulties. It would be great to meet new friends in the association and take part in its activities,” she said.