By Zhanna Shayakhmetova in Nation on 2 April 2021 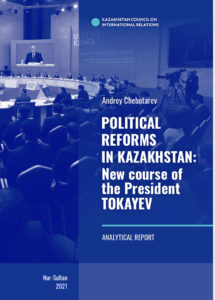 KCIR is an influential foreign policy think tank established in  2017. The President of the Republic of Kazakhstan, Kassym-Jomart Tokayev serves as a Honorary Chairman of the Council.

The report provides an overview of the interim results of Kassym-Jomart Tokayev’s presidency (March 2019-March 2021) and prospects for future growth.

In 2019, Kazakhstan observed its first presidential transition when Kazakhstan’s First President Nazarbayev announced his resignation and the then-Speaker of the Senate Tokayev was sworn in as new President. Less than three months after that, Tokayev won Kazakhstan’s June 9 presidential election with 70.96 percent of the vote.

“This change in the leadership opened the way for certain changes,” Chebotarev told The Astana Times. “Under the leadership of President Tokayev, a rather interesting and critical new stage in its development was reached that combines at once elements of evolution, fundamental reform, and crisis response.” 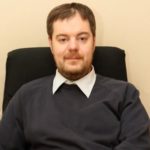 According to the report, Tokayev quickly mastered the modus operandi of a President and demonstrates the ability to respond promptly to various processes and events and make quick but well-thought-out and adequate decisions.

Tokayev defined the key principles of his political course – continuity, justice and progress during his presidential campaign. Later, these aspects were also reflected in the two state of the nation addresses, speeches and the “Nothing is More Precious than Independence” article.

The new reforms were necessary to support the further development of the country. The report provided the seven main attributes of the reforms reflected in Tokayev’s first address “Constructive Public Dialogue – the Basis of Stability and Prosperity of Kazakhstan” delivered on Sept. 2, 2019. These are pragmatism and quality, universality, continuity and gradualism, a strong presidency – an influential Parliament – an accountable government, different opinions – one nation, the concept of the hearing state, and the protection of the rights of the people.

The establishment of the National Council of Public Trust has played a crucial role in promoting the new reforms.

“The unique nature of the council also lies in the fact that it is a mechanism for establishing a dialogue between the authorities and society… As its work and reputation grow, this agency will help the head of state position himself as an ombudsman for the national interest and those of the entire Kazakh community in all its diversity, rather than small parties or groups’ interests,” said the author.

Despite the pandemic, more than 200 measures are being adopted for the implementation of the political, administrative, and socio-economic reforms.

The author also noted that Tokayev “strengthens the relationship of executive power and accountability” by expanding the role of the Kazakh Parliament in state decision-making and increasing the government’s accountability to the Parliament and people.

As a result, six of the newly created agencies are accountable to the President.  “This is an indicator of his sense of personal responsibility for the country’s overall situation and in certain areas in particular,” reads the report. The President’s frequent personal addresses of various issues, especially during the pandemic also proves this.

The formation of a just society and an effective state is now a priority for this new period.

President Tokayev reaffirmed “a commitment to all of his earlier decisions and a willingness to address and improve key areas of the life of Kazakh society and the state through additional packages of relevant reforms” in his recent policy article on Jan. 5, 2021.

This commitment fully resonated with the population, emphasized the author. According to the quarterly ranking of Kazakhstan’s managerial elite, Tokayev has consistently held the first position in all major indicators such as credibility, efficiency, and prospects since 2019. Tokayev’s rating increased from 5.4 to 5.13 from the second quarter of 2019 to the second quarter of 2020. In the fourth quarter, the rating of the Head of State was 5.26 points.

Five institutions headed by the President also received the highest level of public trust of 70 percent, according to the “Monitoring corruption in Kazakhstan for 2020” report.

In 2020, the COVID-19 pandemic became a threat to all the nations. The head of state took an unprecedented decision – a state of emergency on the entire country for 56 days. This helped contain the spread of the infection and prevented the destabilization of the country while protecting the social well-being of parts of the population.

The anti-crisis works included the mobilization of all state and substantial non-state resources to improve the social and economic situation. People from vulnerable groups and businesses were supported by a set of measures and benefits.

The reforms in Kazakhstan mentioned in the report have also caught the attention of the international community.

Mayor of Braga (Portugal) Ricardo Rio noted the importance of the connection between the economic and social reforms. “This is fundamental and in my work as a Mayor of Braga, I always try to connect these two dimensions to foster the economy of my city. I totally agree that the perspective economic reforms are only important if they tackle the inequalities and increase the wellbeing of the population,” he said.

Rio said that it is important to focus on the recovery of the pandemic situation and the internationalization of the economy.

“As a European, I welcome free markets and free trade, so I hope your plan will help Portugal and Kazakhstan to have better trade relations in the near future. As Mayor of Braga, I hope we can solidify our relations, not only with Karaganda, our sister city, but also with the whole country. Kazakhstan should consider me as an ally in this task,” he added.

Sérgio Gonçalves, a senior official in Portuguese Guimarães Municipality noted that Kazakh President outlined the strong, consolidated and forward-looking initiatives without forgetting the problems of the present.

“Under the motto of continuity, justice and progress, it is certain that a just society be built that is attentive to the needs of the citizens. It is the citizens who make a country and it is with them that solid policies for development must be built,” he added.

Gonçalves emphasized that as the ninth world country in the region, Kazakhstan has an enormous opportunity for development. Kazakhstan is “one of the most economically robust countries, allowing it to face the challenges we currently face with enormous security and capacity.”

The author of the report said that the article is targeted for a wide audience. The report will be of special interest for those interested in politics, social studies, civil servants and scholars.