NUR-SULTAN – Kazakh President Kassym-Jomart Tokayev addressed the High-Level Meeting on International Debt Architecture and Liquidity that focused on financing for development amid the coronavirus pandemic, where he spoke on behalf of landlocked countries as chair of the group of Landlocked Developing Countries (LLDC). 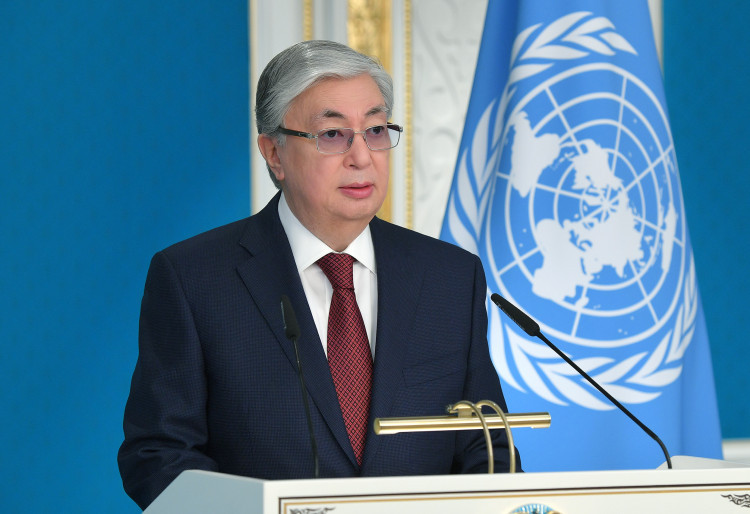 Addressing the meeting, Tokayev said that the landlocked countries faced a “deadly combination.”

“Your initiative on financing for development has become a timely response to the early negative effects of the pandemic. We now need to build on last year’s outcome to streamline all relevant international effort and close the solidarity gap. One year into the Covid-19 pandemic, and we need to acknowledge that LLDC has faced a deadly combination of declining foreign investment, trade and remittances, growing debt burdens and severely reduced fiscal spaces. As a result, LLDCs economies contracted on average by 2.4 percent in 2020 pushing many people into poverty predominantly women, children and people from marginalised communities,” Tokayev told the virtual meeting.

He suggested several recommendations on how the countries can reduce the financial deficit brought by the pandemic.

In May 2020, he proposed relieving the debt burden on national budgets in exchange for increased investments in healthcare and regional development projects, which the group has supported.

He also noted the importance of focusing the World Bank’s $160 billion anti-crisis package and the International Monetary Fund’s $1 trillion credit lines on the hardest-hit countries.

“We call on international financial institutions, UN system and other international and regional organisations to prioritise the special need of LLDSc in their recovery efforts,” he said.

Tokayev also said that the UN Roadmap for the Accelerated Implementation of the Vienna Programme of Action for Landlocked Developing Countries takes on a “new urgency.”

He also called on the International community to support LLDCs in ensuring equitable access, quality and financial protection in their effort to build stronger health systems, boost resilient infrastructure and trade facilitation mechanisms and digital transformation, he said.

“Kazakhstan, in its national capacity, donated to the Global Humanitarian Response Plan and provided humanitarian aid to several countries fighting the virus. We have launched the KazAID ODA  agency to contribute to international efforts aimed at helping developing countries in the region and beyond,” he said.

Tokayev also spoke about the nation’s work on the establishment of a UN Regional Centre for Sustainable Development Goals in Almaty with the possibility to assist Central Asian countries and Afghanistan.

As the pandemic consequences may last longer than expected, all efforts, he noted, should protect the most vulnerable populations, countries and economies.