NUR-SULTAN – Kazakhstan’s Agency for Strategic Planning and Reforms Chair Kairat Kelimbetov and Minister of the National Economy Aset Irgaliyev spoke about the new state planning system and national priorities during a press briefing on March 17. 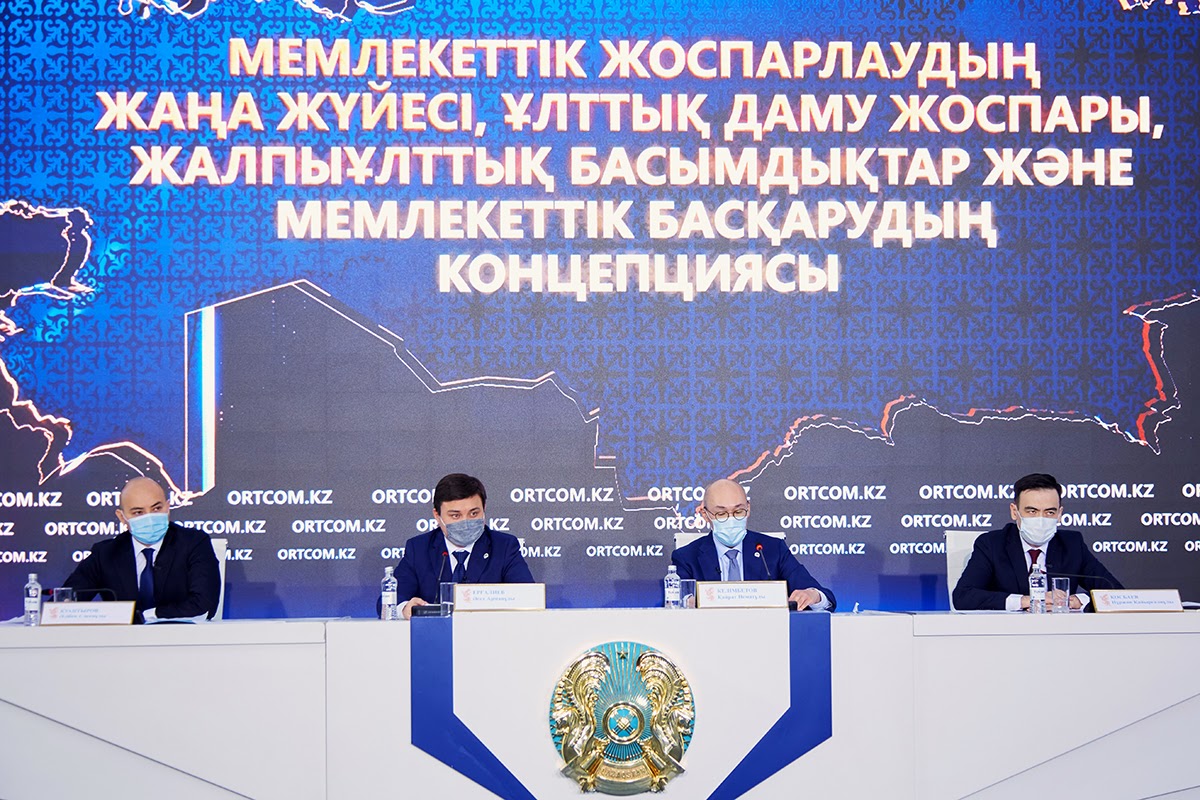 Kazakhstan adopted the National Development Plan in March, which is based on ten national priorities.

The ten priorities include a fair social policy, an accessible and effective healthcare system, quality education, a just and effective state to protect the interests of citizens, a new model of government, cultivating the values of patriotism, strengthening national security, building a diversified innovation-based economy, development of economic and trade diplomacy, and balanced territorial development.

They are cut across three main blocks – improving the welfare of the population, building a stronger economy and enhancing the quality of institutions.

The welfare of the population includes such priorities as fair social policy, an accessible and effective healthcare system, and quality education.

“All of us have seen how important a social system for our state is, particularly during a pandemic. Almost all countries have seriously reconsidered the models of healthcare development, and the quality of financing of various healthcare programs. The priority of accessible and effective healthcare system development is therefore the main direction that the state will deal with. We have serious plans to re-equip medical facilities, to build new modern medical centres in all major cities and regions. We also have very serious plans to develop the healthcare system in the countryside. Accessibility and efficiency of healthcare is a key priority of our country,” said Kelimbetov.

The nation set ambitious goals for its education system that faced serious difficulties last year when all students and school children had to switch to distance learning within a short span of time.

Kelimbetov said Kazakhstan plans to build 800 schools by 2025, raise salaries and address the issue of three-shift system schools that became widespread due to the increasing number of incoming students.

He also commended the strong support that the state provided to its citizens following the coronavirus outbreak. As many businesses had to close due to coronavirus restrictions, it severely affected the incomes of the population. To support people, the state provided financial assistance to nearly 4.5 million people in the country of 18 million, whose jobs were affected by the Covid.

“We all saw how powerful the social support programmes in Kazakhstan were during the pandemic. I don’t think any post-Soviet state provided such serious assistance. It is no coincidence that the head of state was instructed to develop a Social Code,” said Kelimbetov.

National programs are now divided into three levels. The first includes documents that set out long term development plans, such as the National Development Plan 2025 and National Security Strategy. The second level documents determine the policies on the issues between regions and sectors, while the third level documents envision their implementation.

“All these priorities are based primarily on economic and fiscal capacity, so building a diversified economy is a continuation of the reforms that have been outlined in previous decades, which includes moving away from oil dependence and building a non-oil economy. It is very important to concentrate on attracting investments,” said Kelimbetov.

The government is also working to cut the number of state programmes, as instructed by President Tokayev. The state programmes will be replaced by national projects which will be more concise.

In developing national projects, three principles will be observed. It will target the entire country, be people-oriented bringing real benefit to the citizens and incorporate project management tools.

Similar to national projects, the public administration system will also prioritise people in delivering their services.

Minister Aset Irgaliyev said that the global pandemic revealed many problems for countries around the world, exacerbating existing inequalities and leading to protectionism, and unemployment.

The National Development Plan, he said, is meant to help Kazakhstan address all these challenges that also affected the country.

“The strategic indicators map will be an indicator of progress in implementing the objectives of the National Plan. The map includes a list of 41 indicators in three areas, structured by sector, region and the responsible officials. The implementation of the National Plan will result in the economic growth of more than five percent by 2025,” said Irgaliyev.