By Zhanna Shayakhmetova in Nation on 10 February 2021

NUR-SULTAN – The development of renewable sources needs a systematic approach, said Kazakh Prime Minister Askar Mamin at the Feb. 9 meeting of the government. 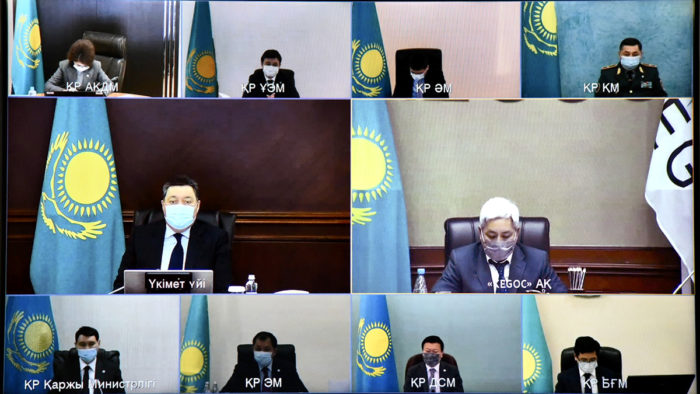 Prime Minister Askar Mamin headed the meeting of the government on Feb.9 in the Kazakh capital. Photo credit: Primeminister.kz.

Mamin noted that environmental issues are priority tasks outlined in President Kassym-Jomart Tokayev’s agenda. Renewable energy is one of the tools for improving the environment.

This year, 23 projects with a capacity of 381 megawatts will be implemented. This includes the launch of 13 wind farms, five hydroelectric power plants and five solar power plants.

Tax and customs administration reform were also on the agenda of the meeting.

Last year, the tax incentives supported more than 700,000 business entities and entrepreneurs last year. A three-year ban (until January 1, 2023) on inspections of micro and small businesses (SMEs) and exemption from taxes on income were also implemented. Due to these measures, entrepreneurs allocated 400 billion tenge (US$957 million) for the expansion and development of their businesses in the next three years.

This year, a new special tax regime for retail tax was introduced on a voluntary basis. The tax rate is set at 3 percent of the income received. This rate is available for companies that were under restrictive measures during the lockdown.

“E-Salyq Azamat (Tax Wallet) and E-Salyq Business free mobile apps should be promoted for the convenience of taxpayers and businesses. The Ministry of Finance needs to develop automatic filling of reports for entrepreneurs when they use online cash register machines and POS terminals,” said Mamin.

The Prime Minister has also set a task to develop proposals for a plan to combat illegal trade at the border by the end of March.