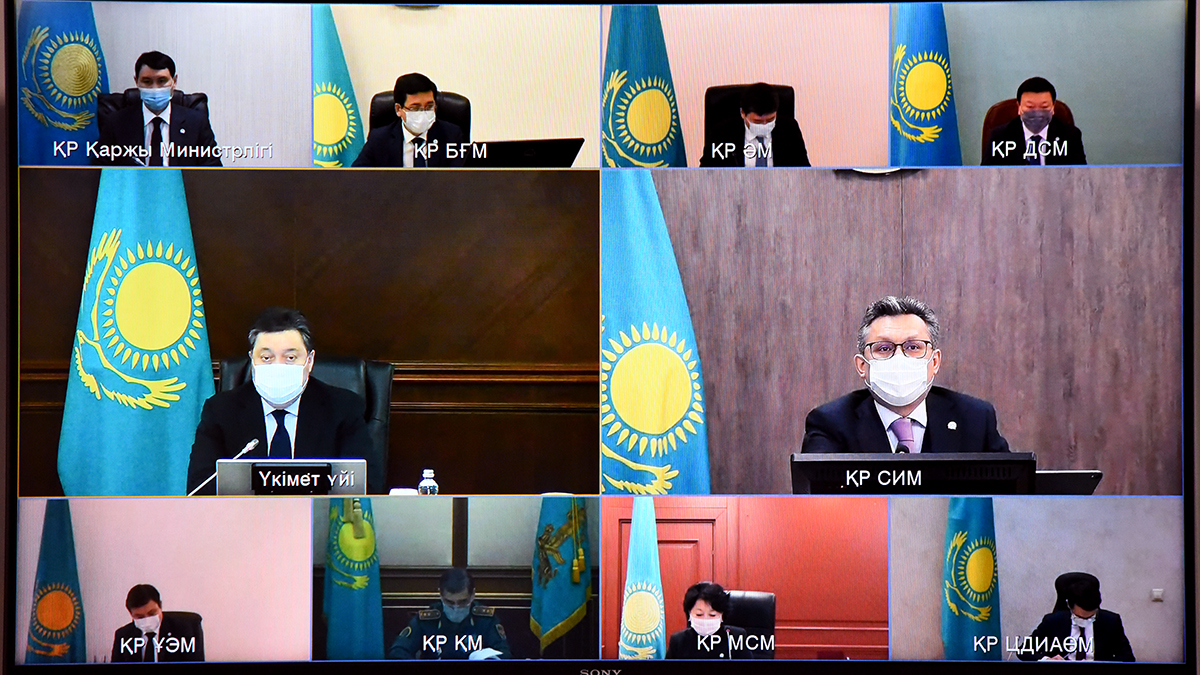 Speaking first, Kazakh Minister of National Economy Asset Irgaliyev, who was recently appointed on the position, said his ministry will prepare suggestions on improving tax and fiscal policy by the end of May. The work will involve representatives of the Atamaken National Chamber of Entrepreneurs and experts.

“A draft concept of the new fiscal policy until 2030 will be developed taking into account the measures to ensure the balance of public finances, increasing their sustainability, and the effectiveness of budgetary decisions,” said Irgaliyev.

Another working group will also involve the Atamaken National Chamber of Entrepreneurs and experts working together to formulate state support measures to small and medium enterprises within a month.

To save budget funds, the ministry will work to optimize the state apparatus, including staff, financial and administrative services.

Business and economy will benefit from a package of urgent measures to foster investments and economic growth, said the minister. The measures include reducing the burden on the payroll with a single rate, instead of the previous five, reducing value-added tax for two years for new production companies, exempting from corporate income tax on the part of the income aimed at reinvestment, as well as simplifying registration and fulfillment of tax obligations for individual businesses,

“Implementation of measures to ensure the self-sufficiency of the export-oriented economy will allow for the increase of the volume of the processing industry by 1.5 times by 2025, the share of processed products in agricultural exports up to 70 percent, as well as seven large ecosystems for production and processing of agricultural products involving 350,000 farms and households,” said Irgaliyev.

Kazakh Finance Minister Yerulan Zhamaubayev said his ministry recently conducted an audit of state programs on their use of the budget funds. The audit revealed nearly 20,000 violations amounting to 7.2 billion tenge (US$17 million).

“Comprehensive measures are being taken to simplify the tax administration, which includes the introduction of a system that allows tracing goods, accompanying consignment notes and electronic seals. This will ensure the transparency of sales between counterparties. We also plan to introduce Blockchain technology in VAT administration, which will significantly reduce the risk of tax evasion and reduce cash-out transactions,” said Zhamaubayev.

The finance ministry will prepare a program by Sept. 1 to improve customs administration aimed at fighting illegal trade

The negotiations are underway at the Central Asia International Center for Trade and Economic Cooperation, said Kazakh Minister of Trade and Integration Bakhyt Sultanov. The center is meant to facilitate the development of cross-border trade with Uzbekistan and is expected to bring bilateral trade up to $10 billion.

“We have allocated a land plot and are in negotiations with the investor. However, due to changes from the Uzbek side, project implementation has been delayed. We are considering additional options” said Sultanov.

Chair of the Agency for Strategic Planning and Reforms Kairat Kelimbetov said that new national priorities will be developed to categorize tasks in the national programs across shorter periods of time.

National programs are now divided into three levels.  The first includes documents that set out long term development plans, such as Kazakhstan’s Strategy 2050 program. The second level documents determine the policies on the issues between regions and sectors, while the third level documents envision the implementation.

“The national priorities include 10 key priorities in three areas – the quality of institutions, the well-being of citizens, and a strong economy. Currently, the draft presidential decree is being reviewed by government agencies. We think it should be sent for an official signature before Feb. 10,” he said.

He also said that the national census will take place in October and will be different from the previous two in Kazakhstan due to the digital technologies used to collect it.

“Now the process of collecting data will be conducted in two ways. The first is an online survey on sanaq.gov.kz. A virtual assistant will help respondents fill out the census forms for themselves and their family members. The second one is the traditional census method (visiting households), which will be conducted among those respondents who did not take the census online. Necessary sanitary norms will be observed,” he said.

During the meeting, Kazakh Prime Minister Askar Mamin brought up the tasks set for 2021. They include three percent economic growth, increasing investment in fixed assets to 20 percent of the gross domestic product and the share of small and medium business to 30 percent, a 10 percent growth in production, and reducing unemployment to 4.9 percent.

“Structural and stimulating measures should provide comprehensive support to the population and business, help them adapt to new conditions, and restore economic activity. With the new reality, we need to focus on the development of a self-sufficient and diversified economy with the proactive promotion of non-resource exports and targeted attraction of investment. Small and medium businesses should also boost economic development,” said Mamin.