By Zhanna Shayakhmetova in Culture, Kazakhstan’s Independence: 30 Years on 7 February 2021

NUR-SULTAN – The Astana Opera House will stage Mukan Tulebayev’s opera “Birzhan – Sara” on Feb. 17  to mark the 75th anniversary of the Kazakh opera masterpiece and 30 years of independence in Kazakhstan. 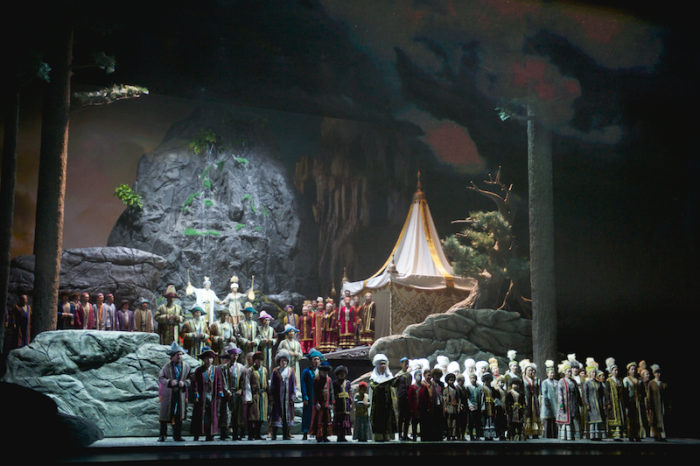 Titled as “The Legendary Opera That Withstood the Test of Time,” the opera was staged during the opening of the Astana Opera House in 2013.

Founded on the initiative of Kazakhstan’s First President Nursultan Nazarbayev, the theater is one of the major popular attractions in the capital and a symbol of the country’s bold integration into the world’s high culture. It is considered to be one of the largest theatres in Central Asia. Since its opening, the theater has something to offer to any sophisticated spectator. The list of its major productions includes “Kyz Zhibek,” “Aida,” and “La Traviata” operas and “Karagoz,” “Spartacus,” “The Nutcracker” and  the“Romeo and Juliet” ballets. 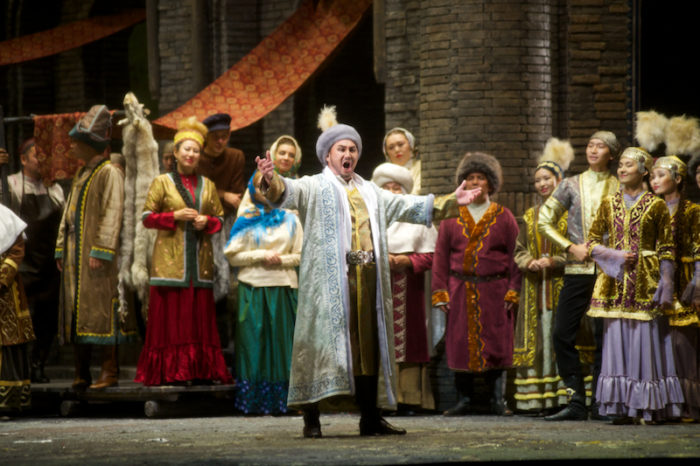 The costumes are made by Honored Workers of Kazakhstan Sofya Tasmagambetova and Pavel Dragunov and video projections are done by Italian specialist Sergio Metalli.

The building and the main hall of the Astana Opera House. Photo credit: astanaopera.kz.

The main themes of the opera focus on the fight for creative freedom and the struggle for happiness. The opera tells the story about a passionate love between famous singer and composer Birzhan and the talented poet Sara. Birzhan dies, but his songs, full of love for the people and dreams for their bright future, live on forever.

“This is a major event for the entire musical community, as “Birzhan – Sara” is a treasure of the Kazakh opera world,” said Music Director of the production Abzal Mukhitdinov. “We will perform the director’s version, which differs from the previous ones. Composer Mukan Tulebayev’s music is bright, beautiful and gorgeous because he was professionally engaged in the singing.”

The premiere of the opera took place in 1946 at the Almaty-based Abai Opera House. The authors and performers of the opera were awarded the Stalin Prize. The opera was staged during the Decade of Art and Literature of Kazakhstan in Moscow in 1958. The opera’s libretto was adapted into Turkish, and the opera was presented in Samsun in 2013, in Istanbul, Bursa, Eskişehir and Ankara in 2014.

For many years, the opera was staged by People’s Artist of Russia and laureate of the State Prize of Kazakhstan Yuri Alexandrov. The theater performed “Birzhan – Sara” in 2014 at the Mariinsky Theatre in Saint Petersburg.

Later, the Astana Opera House presented a musical and stage version of Honored Worker of Kazakhstan Askhat Mayemirov and consulting director and laureate of the State Prize of Tatarstan Mikhail Pandzhavidze. The directors showed a new perspective on the Kazakh classic, breaking the conventions of set design and pushing the boundary of perception with each character.