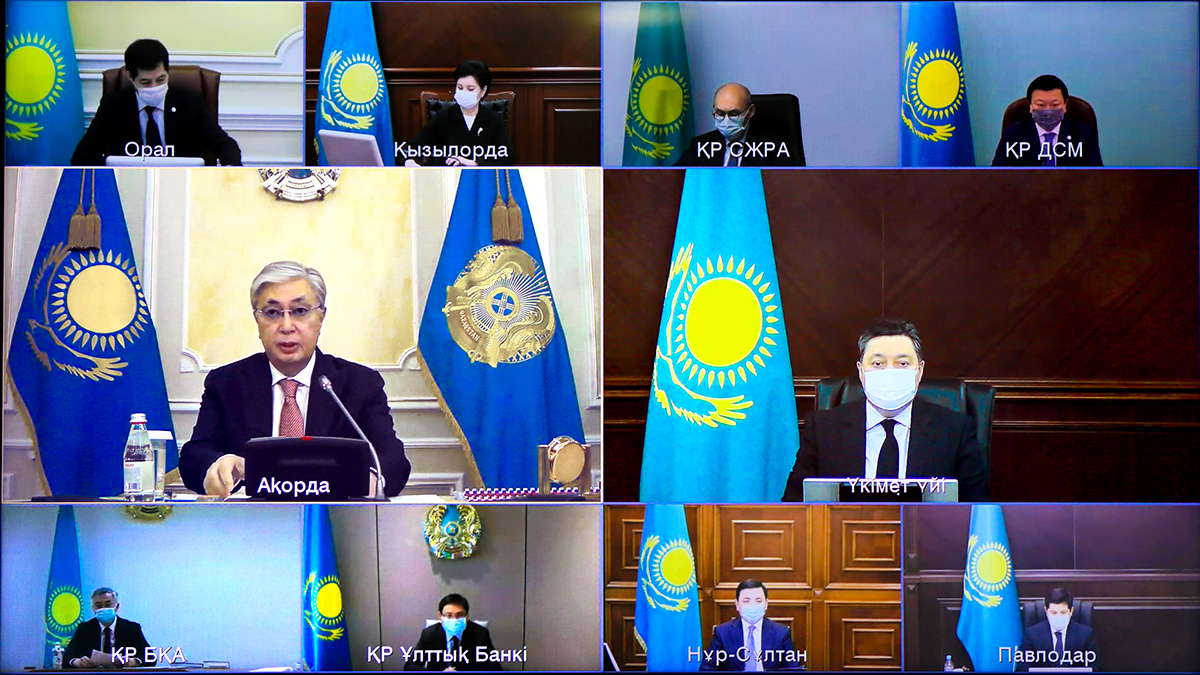 This is the first expanded meeting for the new government following the January 10 parliamentary elections, as required by the constitution.

Kazakh Prime Minister Askar Mamin, speaking first at the meeting, said the government monitors the implementation of national programs as well as the priorities outlined in Tokayev’s state-of-the-nation address delivered in September 2020.

“The National Development Plan 2025 has been developed to implement strategic and program documents. This document is the main guide for the government in the mid-term period to improve social welfare of the population ensuring sustainable quality economic growth,” Mamin told the meeting participants.

In 2021, Kazakhstan is planning 112 projects in agriculture, metallurgy, chemical and light industries, construction and engineering worth two trillion tenge (US$4.7 billion).

The agricultural sector will receive the majority of these project investments. Forty-five projects are planned in the sector worth 154.5 billion tenge (US$366.7 million).

With Kazakhstan’s vast natural resources, the government seeks to tap into the vast potential of the agricultural sector.  This year, it plans to create 7 large production and processing ecosystems of meat, dairy, crops, oilseeds, fruits, vegetables and sugar. In 2020, gross output in agriculture grew 5.6 percent over the year reaching 6.3 trillion tenge (US$14.9 billion).

The government expects the measures will enable a 15 percent increase in agricultural exports.

“This (the plan) will create 13,400 jobs and ensure a ten percent growth in the processing industry,” said Mamin.

The plan is also to launch 40 investment projects worth 126 billion tenge (US$299 million).

Diversifying a predominantly commodity based economy is also a goal the government has been trying to accomplish.

“Financial and non financial measures to support exporters are being introduced. The focus is not only on the production, but also development of services with high export potential. The work is underway to adopt new national standards and protective measures,” said Mamin.

Tokayev stressed the need for greater support for businesses.

“This year, the focus should be on supporting small and medium-sized businesses. I have instructed the government and the Atameken National Chamber of Entrepreneurs to develop the necessary package of measures within a month. The Enbek (labour) state program is the main tool for providing employment. More than 150,000 people have been trained in the Bastau-Business (Starting Business) program. But only 10 percent of them received loans and 19 percent received grants. More than 100,000 people were left without state support,” said Tokayev.

“We have no right to subsidize imports with trillions in the budget,” said Tokayev.

The work dedicated to attracting investments should be reformed, he added, and instructed the Deputy Prime Minister and Foreign Minister Mukhtar Tileuberdi to submit proposals by the end of February.

Mamin said that the government will compile a list of investment projects worth 47 trillion tenge (US$111.3 billion).

“Large projects will be selected from the list and strategic investment agreements will be signed with them,” said the Kazakh prime minister. The government plans to attract $19 billion in 2021 and bring the figure to $30 billion by 2025.