By Akmaral Aben in International on 4 December 2020

Ankara hosted the Third General Assembly of the Islamic Organization for Food Security (IOFS) online under the topic “Sustainable Development of Food Security in the Organisation of Islamic Cooperation (OIC) Region” on Dec.2-3. 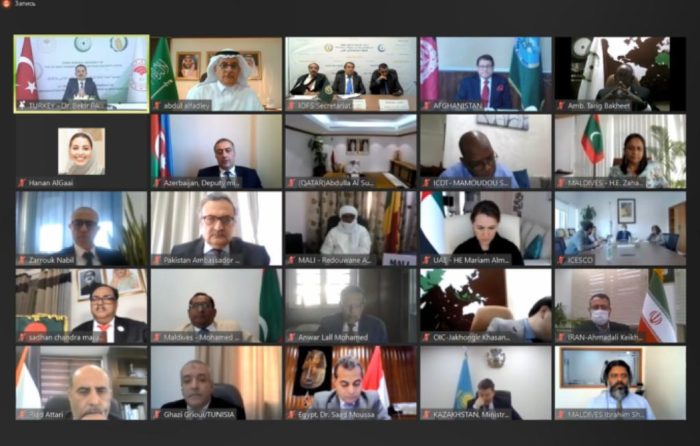 According to the agenda of the first day of the session, the participants discussed the issue of transferring the chairmanship from the Kingdom of Saudi Arabia to Turkey.

Director-General of IOFS Yerlan Baidaulet presented a report to the participants about the IOFS activities for 2019-2020.

The following issues were reviewed:

6.Programs for Science, Technology and Innovation;

The discussion of the programs aroused great interest of the participating countries and international organizations.

The participants approved the report of the Senior Officials Meeting and the Draft Resolutions for adoption by the Ministerial Session on Dec.3.

In addition, the participants tentatively determined the date and venue for the Fourth General Assembly in 2021.

More than 150 participants from the OIC countries took part in the first day of the Third General Assembly of IOFS; among them were the ministers of agriculture, heads of international organizations, and high-ranking officials in charge of food. Many comments and suggestions were received from the participating countries and international organizations, which will be taken into account in future work of the IOFS.

On the second day of the event on Dec.3, Ankara held a closing session with the participation of the ministers of the Third General Assembly of IOFS.

During the session, Tunisia officially announced its intention to join the IOFS by signing the Statute in the near future. The statement was announced by Ghazi Grioui, Minister Counselor at the Embassy of Tunisia in Riyadh, KSA. This country will become the 35th member state of the IOFS.

The session was moderated by the Minister of Agriculture and Forestry of Turkey Bekir Pakdemirli.

The session of the second day was opened by Minister of Environment, Water and Agriculture of the Kingdom of Saudi Arabia Abdulrahman Alfadley.

“We are all well aware that the OIC region has a huge agricultural potential; nevertheless, 350 million people live in extremely poor conditions, suffering from hunger and malnutrition. It is important for us to combine our efforts to solve the social issues of the OIC region, as they directly relate to food insecurity,” he said.

In his speech, Ambassador Tarig Ali Bakheet, Assistant of OIC Secretary General for Humanitarian, Cultural and Social Issues, voiced the absence of a systematic approach to food security in the OIC countries, and the important role of IOFS in creating this system.

According to the agenda of the second day of the session, the chairmanship of the Kingdom of Saudi Arabia was transferred to Turkey for a period of one year.

Further, the newly elected Chairman, Minister of Agriculture and Forestry of Turkey Pakdemirli made a speech. He thanked the participants and noted that agriculture and food security are the main topics in the world today due to the COVID-19 pandemic, and that Islamic countries should help each other.

Vice Minister of Agriculture Akif Özkaldi presented a report of the Senior Officials Meeting to the Ministerial Session, which took place the previous day. The speech by Director General of IOFS Baidaulet aroused great interest from all participants.

“I must at the onset express my appreciation to the Republic of Turkey for hosting us today and all the efforts that have been done to make our meeting possible. I would like to express my deep appreciation for Your Excellencies and all distinguished delegates from the esteemed Member States, the great OIC Secretariat and the fraternity of OIC Institutions for making this video conference meeting available. I also seize this opportunity to express my wholehearted respect and gratitude with thanks to the Kingdom of Saudi Arabia for your leadership and support for IOFS during the last year. With the KSA’s continued support we at IOFS unabatedly work to achieve our targets and design our new Plan of Action. As we all know that 2020 has been an unprecedented and challenging period that has affected all parts of the world especially the OIC region with the COVID-19 pandemic and its subsequent drawbacks. The global food systems have been tested by both environmental and biological factors that reflect the urgent need for a more resilient, strong and powerful food system that can bear the responsibility at national, regional, and international level. The first and immediate global reaction to COVID19 was having in place all the measures for an appropriate lockdown and closing borders to protect all countries from the spread of the pandemic. Such action affects the flow of food supplies, disturbs the food chain and leaves farmers facing challenges without support. According to the WFP and an estimated 265 million people could be pushed to the brink of starvation by the end of this year. The food we need should be nutritional, safe, Halal and enough for everybody,” said Baidaulet.

A parliament member, Minister of Food of the People’s Republic of Bangladesh Sadhan Chandra Majumder opened the country discussions, noting that he provides continuous support to the activities of the IOFS, and hopes to establish close, mutual cooperation.

Redouwane Mohamed Ali, Minister-Commissioner for Food Security of Mali, stressed the importance of financing and urged the participants to support and promote the implementation of the Food Balance Database, Food Humanitarian Programs, OIC Food Security Reserves and others.

Dr. Saad Moussa, the representative of the Egyptian Ministry of Agriculture, supported the participant from Mali and noted that all the topics discussed today are of the highest importance, and it is necessary for all IOFS countries to expand cooperation in agro-trade.

UAE Minister of State for Food and Water Security Mariam Al Mheiri emphasized the important role of the IOFS in the issue of food security and noted that the dependence of many OIC countries on food imports makes them vulnerable to various kinds of crises.

The ISESCO representatives supported the proposal to create a centralized national bank of genetic resources of Islamic countries.

Mageed Yahia, Director of the UNWFP office in the UAE and representative in the GCC region, proposed closer cooperation with IOFS, noting the common goals and vision of the organization in this matter.

As a result of the Ministerial Session, all Resolutions of the Third General Assembly of the IOFS were adopted:

– Turkey was elected as Chairman of the General Assembly, the UAE and Mali as Vice-Chairmen, Kazakhstan as Rapporteur.

– All IOFS programs were approved.

– Kazakhstan was designated as the venue for the Fourth General Assembly in 2021.

More than 170 participants from the OIC countries took part in the Third General Assembly of IOFS over two days, among them were ministers of agriculture, the OIC and its institutions, heads and representatives of international organizations such as AOAD, SESRIC, ITFC, SMIIC, FAO, ICBA, BADEA, IFAD, AAAID, COMCEC, ICCIA, ICIEC, ICD, ISESCO, CILSS, IDB.

On a final note, it is worth noting that on Dec.3, within the framework of the Third General Assembly in Turkey, IOFS Director-General Baidaulet held an official meeting with Minister of Agriculture and Forestry of Turkey Pakdemirli. The parties discussed the holding of the Ministerial Session and agreed on bilateral cooperation within the framework of the IOFS programs.

The author is Akmaral Aben, the IOFS Advisor.