Political Parties Present Their Platforms Ahead of Majilis Election

By Aiman Zhussupova in Nation on 9 December 2020

The Astana Times presents a series of stories dedicated to the upcoming Majilis (a lower house of the Kazakh Parliament) elections, which will be held on Jan.10, 2021. The first story is about  the program presented by the political parties at the recent meetings.

This year, five political parties submitted party lists to the Central Election Commission (CEC), according to a Dec. 2 CEC report.

On Nov. 25, the Nur Otan party presented a five-year program titled “Path of Change: A Decent Life for All.” It was noted that the whole country participated in its creation. Among the main priorities of the new party program are improving the quality of life of the country’s citizens, social justice, and an accountable listening state.

According to the plan, 21 trillion tenge (US$49.9 billion) will be attracted for the implementation of the party’s program. The program has four main priorities. The first goal is to provide every citizen of the country with equal opportunities to realize their potential. The social policy will focus on strengthening measures to provide targeted assistance to citizens in difficult situations.

Secondly, for the formation of an intellectual nation, the party plans to increase spending on education, science, health care, culture and sports, accounting for at least 5 percent of Gross Domestic Product (GDP). The agenda places great emphasis on the development of regional medicine by building modern medical centers in all areas. Doctors’ salaries will grow 2.5 times by 2023. The goal of these measures is to increase the average life expectancy of Kazakh citizens to 75 years.

Thirdly, the agenda is focused on sustainable development of the regional economy. Systemic reforms will be implemented to build a new economic model, mainly through a tight but balanced macroeconomic policy, support for the private sector, and the fulfillment of social obligations to citizens.

The fourth priority includes an accountable “listening state” and responsible citizens, ensuring the transparency of the activities of state bodies and constant oversight by the public.

The Nur Otan Party’s congress was held on Nov.25.

The creation of new jobs through the development of the Information Technology (IT) sector and tourism, an increase in the volume of non-resource exports by two times to 40 billion dollars per year, support for Small and Medium-Sized Enterprises (SMEs), which could provide jobs for four million Kazakh citizens by 2025. At the same time, President Kassym-Jomart Tokayev stressed that any obstruction to ease of doing business would be considered a serious crime.

Thus, the Nur Otan party program through 2025 defines a set of specific measures including further systemic modernization, formulated by chairman of the party Nursultan Nazarbayev, the implementation of changes in various spheres of the life of Kazakh society and the state, which reflects the name of the announced pre-election campaign. 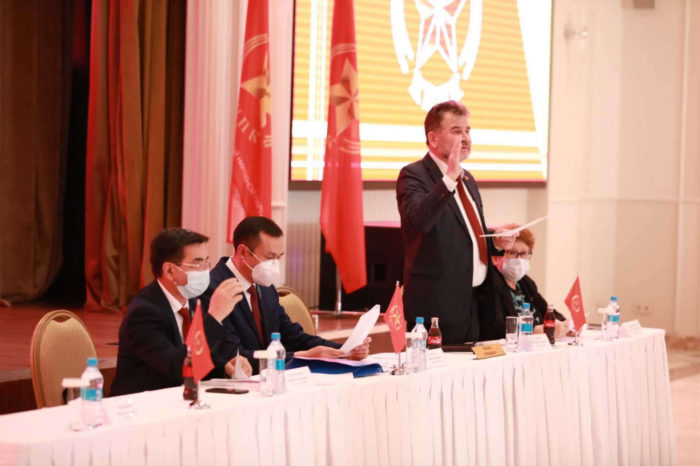 The meeting of the People’s Party of Kazakhstan was held on Nov.11.

In its election program “People, Land and Justice,” the party stands for the availability and quality of education and medicine, for reducing the retirement age to 60 years, as well as for holding a credit amnesty for individuals and legal entities at the expense of banks.

The party intends to work on 10 areas. The first goal is to ensure the availability and quality of education and medicine. The campaign focuses on providing free education, increasing spending on healthcare, adopting a new law on product quality that prohibits the use of harmful food additives and toughens criminal penalties for counterfeiting food and drugs.

The second area is focused on solutions to the housing problem facing Kazakh citizens. This includes the need to approve the housing quality standards for the citizens of the country to ensure comfortable and safe conditions in housing units as well as the allocation of 20 acres of land to each family for the construction of a house and household, and the provision of the necessary infrastructure at the expense of the state.

Thirdly, the state must guarantee quality of life standards during old age for Kazakh citizens.

Fourth, the economy should work in the interests of the people, not the capitalists. The party advocates preserving state ownership of land resources and ensuring control over the observance of the prohibition of land ownership by foreigners.

According to the program, agriculture will become the driver of the economy and ensure the country’s food security. Moreover, credit amnesty for individuals and legal entities will be provided at the expense of the banks. Among other priorities are the fair tax policy, transparency and control over the effectiveness of the implementation of government decisions, the impartiality of the judicial system, and the spiritual heritage of the people.

The People’s Party has formed its list of 125 candidates at the 16th extraordinary congress on Nov. 23.

The Ak Zhol party advocates strengthening the institutions of parliamentarism and a gradual transition from a super-presidential system to a parliamentary republic in its program. 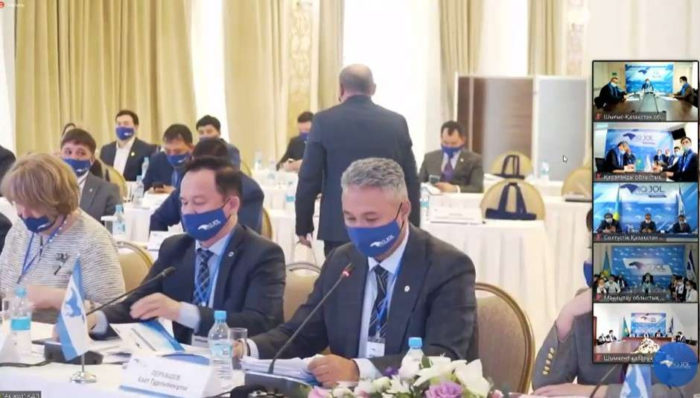 The Ak Zhol Party’s congress was held on Nov.20.

The party suggests that the government needs to be formed not by the head of state, but by the party that won the parliamentary elections. Among the other initiatives of the party are the introduction of direct election of akims (mayors), the expansion of the control functions of the Parliament and Maslikhats (local representative body) by empowering them with the right to conduct parliamentary investigations and  strengthening the powers of the Parliament in approving and controlling the state budget, including the budgets of national companies and state-owned enterprises.

Moreover, the Parliament should have the right to allocate funds for the needs of voters, despite the possibility of objections from the Government.

The party pays special attention to the issue of ensuring fair elections, simplifying the registration of new political parties up to 10,000 members, as well as reducing the threshold for parties to enter the Majilis and Maslikhats from seven to five percent.

The Ak Zhol democratic party follows a European model of development, European approaches in relations between the state and society, and European standards for quality of life.

As a long-term perspective, the party considers not only the introduction of European approaches, but also raising the question of Kazakhstan’s accession to the European Union.

The Ak Zhol Democratic Party announced its list of 38 candidates at the Nov. 20 congress.

The party’s program emphasizes the need to improve the standard of living in the countryside and introduces a project for the development of rural infrastructure. 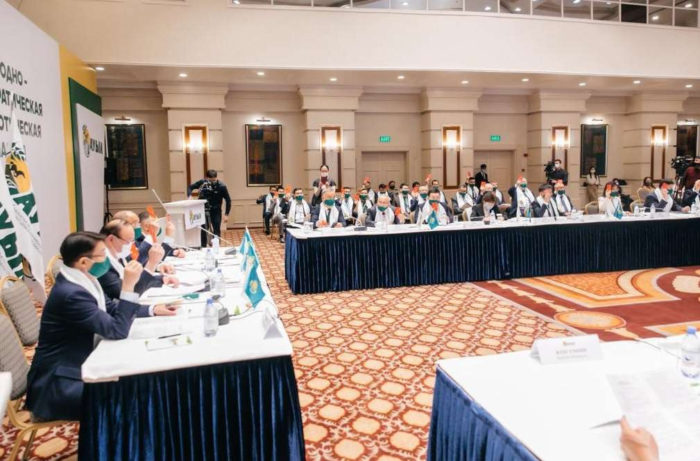 The Auyl Party announced its candidates at the party’s meeting on Nov.18.

The party notes the inefficient use of the money allocated for agriculture.

The party’s pre-election program proposes the creation of a system of long-term credit to agricultural producers with an annual payment of two percent. “We believe that with such support it is possible to increase agricultural production,” said the party chairman.

The main goal of the party’s program is the formation of a modern and competitive agriculture. At the same time, the party is going to focus on issues of increasing employment, providing decent wages and social protection.

The Auyl party announced its list of 19 candidates at the Nov. 18 meeting of party members.

The party’s electoral program focuses onfive key areas: a decent life for all citizens; entrepreneurship as the basis of a successful state; the development of the agri-industrial complex and food security; strong regions – a strong country; the state working for the people. 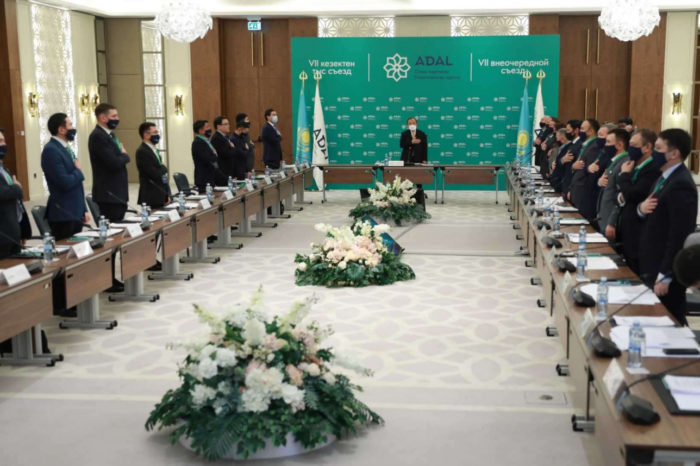 The Adal Party’s congress was held on Nov.19.

According to the chairman of the party, an important measurable criterion for the work of the authorities is the social well-being of citizens, which, in turn, is affected by stable work, income, satisfaction with relative social status and overall financial situation.

The chairman of the Adal party is Serik Sultangali. The party participated in the elections for the first time in 2016 and gained 0.29 percent of the vote.

The author is Aiman Zhussupova, an expert of the Institute of World Economics and Politics (IWEP)  under the Nursultan Nazarbayev Foundation.