Kazakh Prime Minister Askar Mamin took part in an online meeting of the Council of Heads of Government of the Shanghai Cooperation Organization (SCO), reported the PM’s press service. 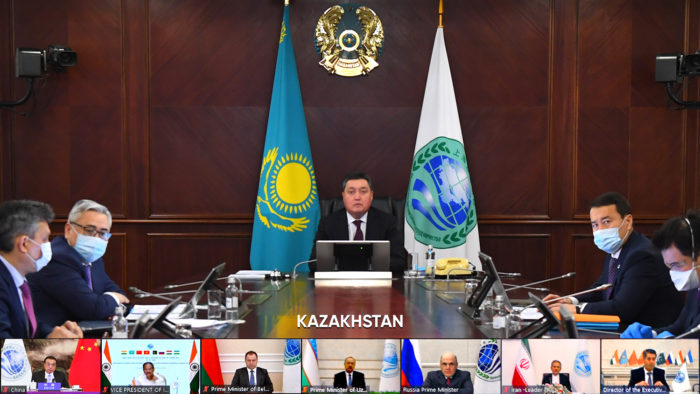 Mamin stressed the need for closer and effective cooperation between the SCO countries in the field of trade, and the need to explore opportunities for increasing the volume of trade within the organization.

The Prime Minister proposed to revise the existing SCO Cooperation Program on Food Security, supplementing it with specific measures to increase investment and innovation in the agricultural and industrial complex.

According to Mamin, the program should take into account the competitive advantages of each of the SCO member states, as well as new approaches to providing a reliable, affordable and resilient logistics infrastructure to external and internal shocks.

He noted the need to increase industrial and investment cooperation.

“The implementation of joint investment projects will allow us to strengthen the integration of our national economies, diversify the directions of production processes and increase their stability, expand the value created by SCO member states to both mutual and foreign markets, maximize the potential of economies through competitive advantages, and reduce the impact of external shocks,” Mamin said.

The meeting was attended by representatives of the SCO Secretariat and structural subdivisions of the organization responsible for trade and banking.

They discussed measures to deepen cooperation between the SCO countries in the trade, economic and investment spheres, including joint actions aimed at overcoming the consequences of the pandemic.

The activity of the Business Council and the Interbank Association of the Shanghai Cooperation Organization for the past two years, the report on the execution of the SCO budget for the last year and the budget for 2021 were considered. Following the meeting, a joint communique and a plan for the implementation of the SCO Multilateral Trade and Economic Cooperation Program for 2021-2025 were both adopted.

Kazakhstan has been experiencing a veritable boom in agricultural yields as investment has poured into the dynamic and developing sector of the Kazakh economy. In 2020, the sown area for grain crops increased by 514,900 hectares, the sown areas were expanded at the initiative of the farmers themselves after the sowing was completed on the planned part of the area ahead of schedule. The average yield of grain crops in Kazakhstan this year has increased by 0.3 centners per hectare, making the Kazakh agri-industry more competitive still.

Looking ahead, Governor of the Astana International Financial Center Kairat Kelimbetov predicts that Kazakhstan will be able to play an important role in ensuring global food security.

“Agricultural products will be in great demand. Our country has a traditional advantage in this field that we must take full advantage of,” Kelimbetov said.