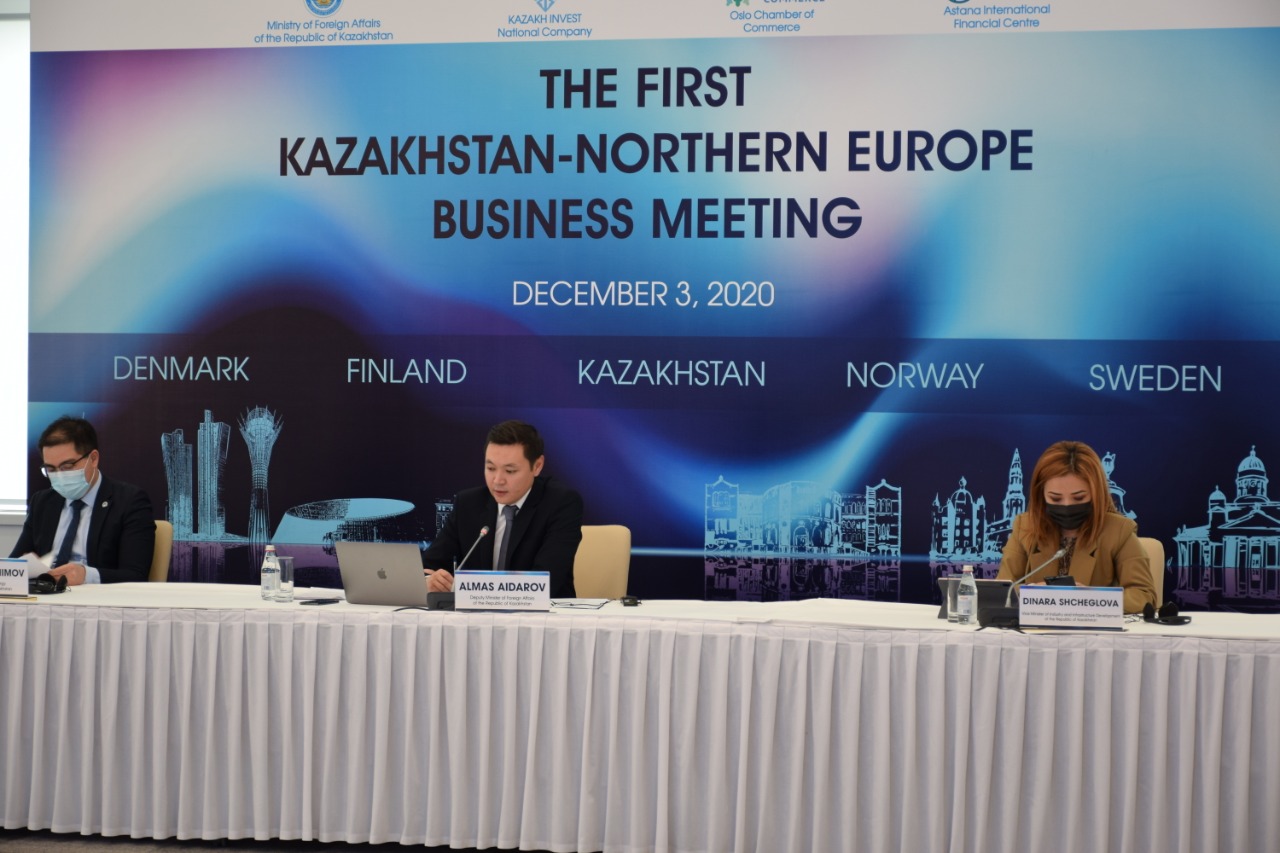 The meeting that gathered more than 100 participants focused on promising areas for cooperation, including agriculture, digital technologies, ICT development, and mining.

They noted significant opportunities in attracting new investors to create jobs, open businesses and expand cooperation between Northern Europe and Kazakhstan, Central Asia’s largest economy with access to a huge market half a billion consumers.

“Since the very first years of Kazakhstan’s independence, the countries of Northern Europe have always been important partners to our country. We enjoy both great political and economic relations. Remarkably, starting from 2005, Sweden, Norway, Denmark, and Finland have invested cumulatively over $2.4 billion to Kazakhstan’s economy. In the last four years alone, trade turnover between Northern Europe and Kazakhstan amounted to over $3 billion,” said Kazakh Deputy Foreign Minister Almas Aidarov in his opening remarks.

In 2019, trade turnover between Kazakhstan and four Northern European countries totaled almost $810 million and $547 million in the nine months of 2020.

He invited companies and investors from Northern Europe to seize the benefits offered by Kazakhstan, including its strategic location and favorable investment climate. He said, “the strategic agenda is ambitious and clear.”

“Our country consistently develops reforms aimed at improving the investment climate. We ensure a direct and open dialogue between the government and investors and continuous improvement of infrastructure to attract new investments, advanced technologies, and technical know-how.”

The Vice ministers from the Kazakh Ministry of Agriculture, Ministry of Ecology, Geology and Natural Resources, Ministry of Industry and Infrastructure Development told the gathering about the opportunities in agriculture, fish farming, subsoil use and mining and renewable energy.

Kazakh Deputy Energy Minister Kairat Rakhimov said the coronavirus pandemic affected all areas of the economy but remained optimistic about the positive aspects it revealed. 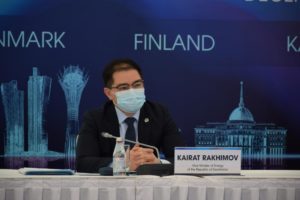 He said the country is committed to expanding its renewable energy sector. Kazakhstan launched more than 20 renewable energy projects with a total capacity of 500 megawatts over the past year.

It is part of the country’s general effort to bring renewable energy share to three percent of the general energy mix by the end of 2020.

While more than 70 percent of Kazakhstan’s electricity is currently produced at coal-fired plants, most of which are outdated, the development of renewable energy is an integral part of the country’s goal to transition to low-carbon development, diversify the economy and bring private capital and investments into the country.

“We will develop energy generation, gas and hydro energy. From 2021, we plan to move to the second phase, we will prepare an auction mechanism, similar to renewable energy auction. By the end of the year, we will conduct the first auction and we invite all of you to participate both in auctions and preparations for it,” said Rakhimov.

Pavel Koktyshev, head of the Zerde national information and communication holding, invited the participants to explore the ICT sector.

“The ICT sector is growing rapidly and Kazakhstan is no exception to this trend. Kazakhstan introduced the Digital Kazakhstan program three years ago and was among pioneers in the area of digital transformation. It was quite ambitious and successful,” he said.

Kazakhstan invested $100.3 million in the first two years of the program creating 120,000 jobs and attracting $79.3 billion in the innovation ecosystem.

“We welcome Nordic companies and entrepreneurs to introduce interesting projects in ICT. Reaching 29th place in an e-government survey (the UN E-government Development Index) we have a proven record of Kazakhstan’s commitment to digital development and transformation and we are number one in open government and data provision (within the Commonwealth of Independent States) which proves our commitment to excellence,” he said.

Koktyshev noted that Kazakhstan still has a lot to learn from Nordic countries in terms of digital transformation and innovative solutions.

“Kaspi recently entered the London Stock Exchange and its value is estimated at $6.5 billion. It is the first Kazakh technological unicorn. We are rich not only in natural resources but also in our talents and human resources. We are inviting companies to partner to provide technological transformations to Kazakhstan and to the region,” he concluded.

James Martin, CEO at Astana International Financial Centre (AIFC) Business Connect, spoke about the special conditions that the center provides. He noted the AIFC’s role is to facilitate investments and increase the presence of foreign companies in Kazakhstan.

“It’s all about decreasing risk and accessing investments not only in Kazakhstan but in the wider region,” he added.