NUR-SULTAN  – The Shyrak Association, an NGO supporting the rights of people with disabilities, in particular women, seeks to promote a human rights-based approach to disability issues, said Shyrak Association head Lyazzat Kaltayeva in an interview with The Astana Times. 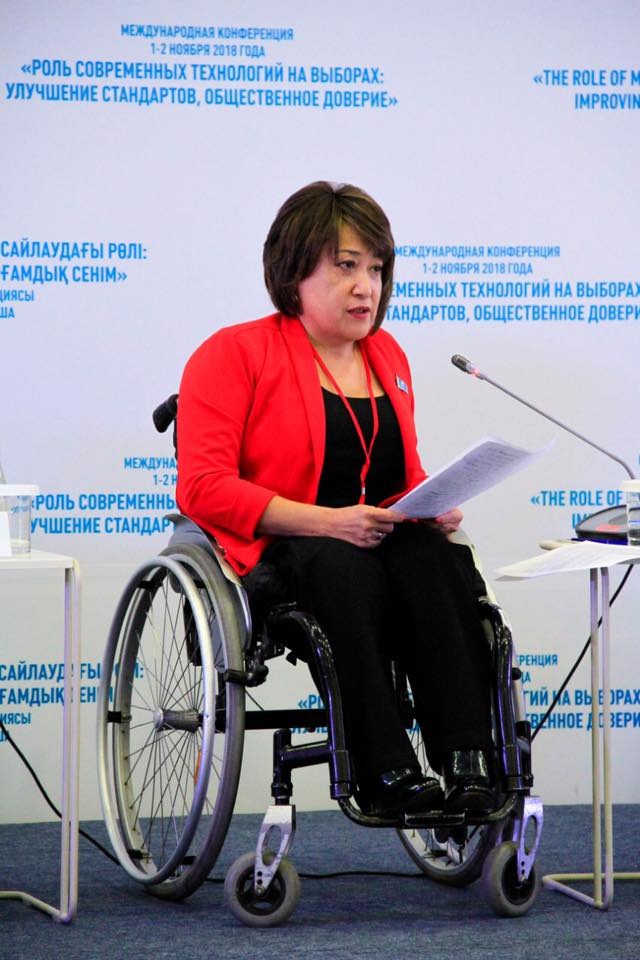 “From the very beginning, we decided that we would not engage in charity or medical rehabilitation services. The main principle and approach in the organization have been about applying a human rights approach to disability issues. The values of the organization are diversity and equality, participation and development, dignity and justice,” said Kaltayeva.

The organization’s activities cover more than 50 projects across four strategic areas. These include encouraging greater involvement of women with disabilities through their education and social inclusion, consolidating the efforts of similar organizations in Kazakhstan and Central Asia, promoting the interests of women with disabilities in all advisory bodies and changing the attitudes within the country’s population.

“I was seven years old when I suffered a spinal cord injury in a car accident. Like many children with disabilities at that time, I studied at home. Thanks to my family, I received a good education, had the desire to live a full life and the desire for lifelong learning. But only now do I realize how many barriers my family had to overcome for me to be able to study, work, communicate and have a family,” said Kaltayeva.

One of the legacies inherited from the country’s Soviet past is a mindset that frames disabilities as illnesses to be either treated or if not, hidden away. During Soviet times, it was common to send disabled children and adults to special schools or institutions, where their isolation from the outside world only became greater.

“During the difficult 1990s, people with disabilities felt particularly isolated, helpless, and lacking support, and it was then that we began to gather people to communicate, share experiences and find solutions to our problems. We were changing, but the situation did not change, the attitude within society was still based on the charity and medical models, while we no longer wanted to feel like just recipients of social assistance. We wanted to be a full part of society,” she said.

With Kazakhstan gaining independence, rights and interests were slowly but steadily gaining more attention. It was not until 2015 when Kazakhstan ratified the UN Convention on the Rights of Persons with Disabilities to improve the lives of the country’s disabled population that currently makes up nearly 700,000 people.

An international seminar in Almaty in 2000 that brought experts from Finland gave Kaltayeva a different perspective on how people with disabilities can live their lives.

“Cooperation with organizations from different countries, such as the Abilis Foundation, Disabled People International, Asia-Pacific Development Centre on Disability (APCD) and others has helped us to join the international movement of people with disabilities. We are supported by programs of international donor organizations and UN agencies,” she said.

In 2005, the association also established a Central Asian expert network of women with disabilities, which is now one of the strongest regional organizations promoting gender approach to disability issues and protecting the rights of girls and women.

There are also social issues that include housing, quality of social services and their focus on individual needs and medical care.

Many of them, however, require major legislative changes as well as an infrastructure overhaul. But what is also important is to encourage people with disabilities to be more active and give up their dependency and claim their rights.

“Many issues are resolved when a person learns about their rights and existing state aid and support. Informing people is important here, including in formats that are accessible to persons with various disabilities, such as sign language translation, Braille, audio and digital formats. It is also very important to adapt and provide information in the easy-to-read format for people with intellectual disabilities,” said Kaltayeva.

She is optimistic about the government’s efforts in this area.

“Civil society has played and continues to play a crucial role in representing the interests of citizens, including those with disabilities, and advocating for their rights. The government has a Coordinating Council for the Rights of Persons with Disabilities, half of its members are representatives of organizations working with disability issues. The same councils exist in all regions and at all levels,” she added.

In 2019, the Shyrak Association also became a member of the Kazakh Foreign Ministry’s Dialogue Platform on Human Dimension, a consultative advisory body created in 2013 and involved with systematic and comprehensive work with national NGOs in the field of human rights and democracy.

With her vast experience, Kaltayeva is a candidate for elections to the United Nations Committee on the Rights of Persons with Disabilities (CRPD) scheduled for Nov. 30 and Dec. 1-3. The elections will take place during the 13th session of the conference of the state parties. The committee consists of 18 independent experts that monitor the implementation of the Convention on the Rights of Persons with Disabilities and nine members will be elected in the upcoming elections.

She said she feels a huge responsibility, but her experience in working with international organizations and an understanding of the situation and needs of people with disabilities helps her.