Production at YDD plant. Click to see the map in full size.

Karaganda Region is Kazakhstan’s largest region in terms of territory. Located in the country’s central part, its area amounts to 428,000 square kilometers and it is home to nearly 1.5 million people.

The region has served as an intense coal mining site since the times of the Soviet Union and it is now a major industrial region in Kazakhstan rich in mineral resources. The region is home to some of the major industries in the country, including ArcelorMittal Temirtau and KazakhMys, Kazakhstan’s largest copper producer.

During his visit to the region, Tokayev visited the YDD Corporation’s ferroalloy production plant, where he was briefed on the production of high-quality ferrosilicon (FeSi75), the key element in steel production and alloying. 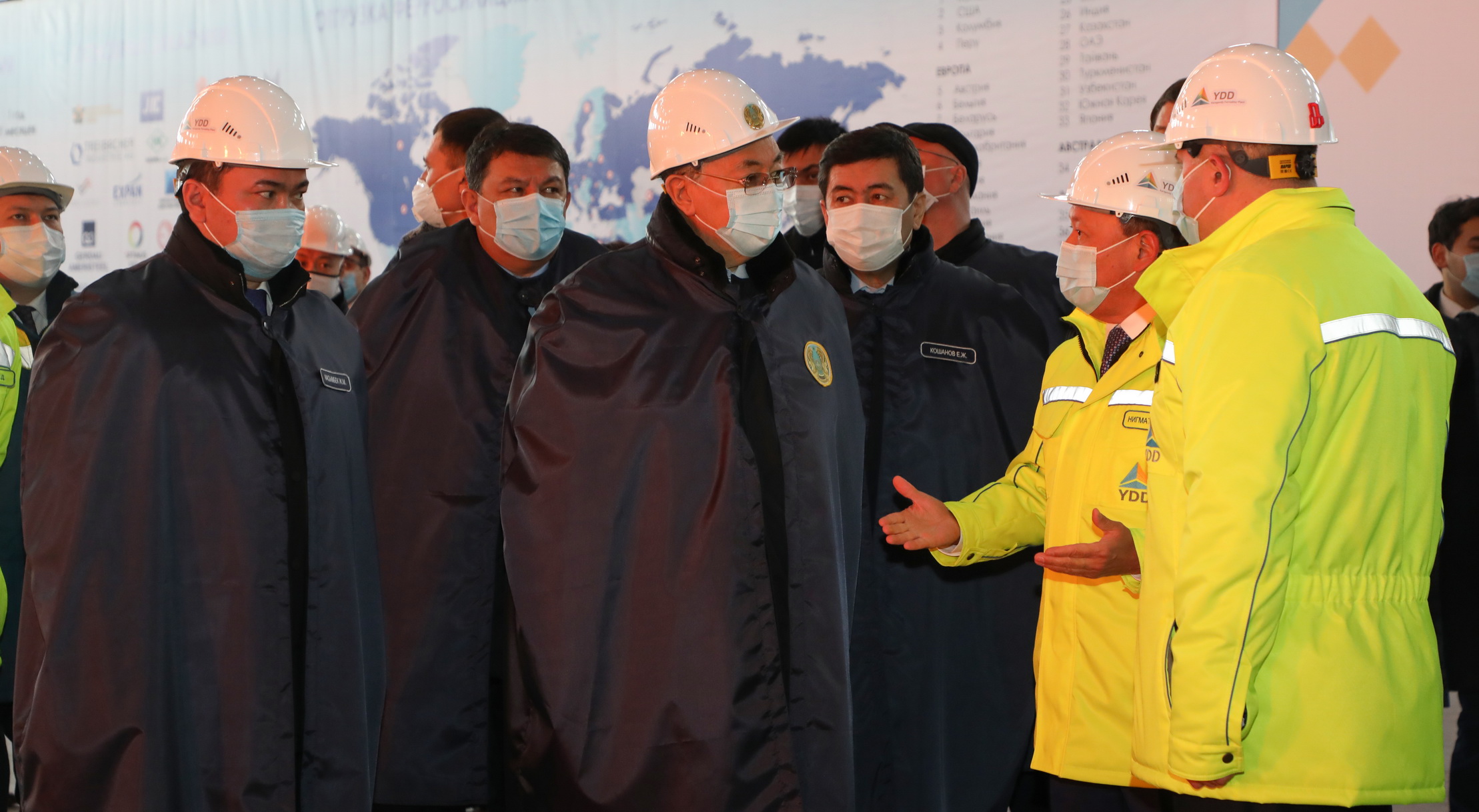 The plant’s current capacity is 180,000 tonnes of fully export-oriented ferrosilicon per year, and the company plans to gradually increase it up to 240,000 tonnes per year.

The plant exports its products to more than 37 countries. The company’s stakeholders said it meets the domestic and global demand for ferrosilicon in markets across Europe, South East Asia, North and South America.

Tokayev also got acquainted with the company’s new project, Qaz Qarbon, that does sorting, crushing and shipping of coal coke.

“Congratulations, this is a very necessary and good thing. It is a serious asset in our economy not to mention a significant contribution to the industrialisation of Kazakhstan. I see how it is done. These are big and good plans, we will watch closely and support it,” said Tokayev.

“This enterprise is the flagship of Kazakh metallurgy. Kazakhstan’s First President Nursultan Nazarbayev started his career here. We have set the task to increase production capacity, and I have just been informed about new investment projects, as well as the tasks to modernize production and certainly improve social conditions. The company faces many challenges, and they must be gradually addressed,” said Tokayev.

As part of his visit, Tokayev also took a trip to a new school in the region that will be named after well-known Kazakh thinker and poet Abai Kunanbayev. The new school is designed with 1,200 places.

“900 school students from nearby Kazakh language schools transferred to the educational institution, which served a big step towards eliminating the three shift system at schools. The president got familiarized with the school’s education system, and visited classrooms,” said Akorda in a statement.

The school is equipped with modern technology, a STEM laboratory, robotics and intellectual rooms, a school television, a media and an art studio.

“The president supported the idea to give Abai’s name to the school. It will support the studies and promotion of the legacy of the great poet and thinker. The school will host not only the city, but also regional events and the school has a hall for 700 seats for this purpose,” said the president’s press service.