The Power of Context: Abai Kunanbayev’s Translations Made European Literature Accessible to the Kazakh People

This year is marked by the celebration of the 175th anniversary of Kazakh poet and writer Abai Kunanbayev. Kunanbayev went on to become the first Kazakh classic writer famous not only for his works, philosophical treatises and music, but also as a translator, who popularized the masterpieces of world literature for a general audience. He translated into the Kazakh language the works of Alexander Pushkin, Mikhail Lermontov, Ivan Krylov, Ivan Bunin, Adam Mickiewicz, Johann Wolfgang von Goethe and Lord Byron. 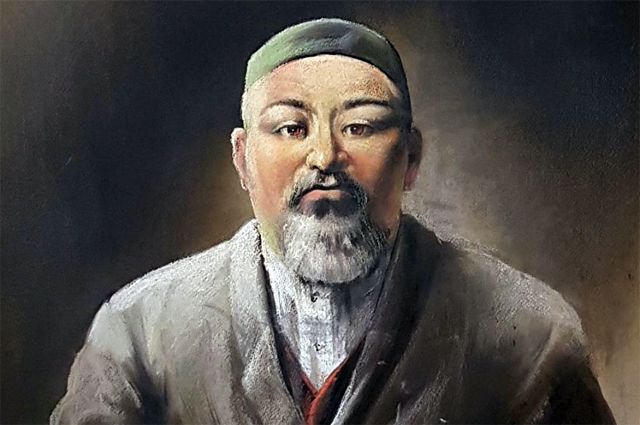 Abai Kunanbayev. The painting was created by the artists from the Zhagyru creative association. The painting is on display at the Museum of Arts of the East Kazakhstan region in Ust-Kamenogorsk.

Recently, Sauytbek Abdrakhmanov, Deputy of Mazhilis (the lower chamber of Kazakh Parliament), Doctor of Philology and Member of the State Commission on preparation to the 175th anniversary of Abai Kunanbayev, released the work dedicated to Kunanbayev’s contribution as a translator and analyzed the originality and meaning in his translations.

In Search of the Context

This is the most striking and the most modern element in Abdrakhmanov’s  philological essay on Kunanbayev’s translations “Thus Spoke Abai” – the context, in which Abdrakhmanov puts the translations of Pushkin and Lermontov. Known to every high school student in Kazakhstan and Russia, these works get fresh colors and produce new melodic sounds, when a meticulous, but also loving researcher puts them next to each other – Pushkin’s verses and Kunanbayev’s translations. And when Abdrakhmanov adds a charming contextual detail – such as a brief study on love letters in the nineteenthcentury rural Russia and Kazakh steppes of the time – the reader is invariably rewarded for the time spent on reading the Russian and Kazakh variants of “Eugene Onegin” or other works. 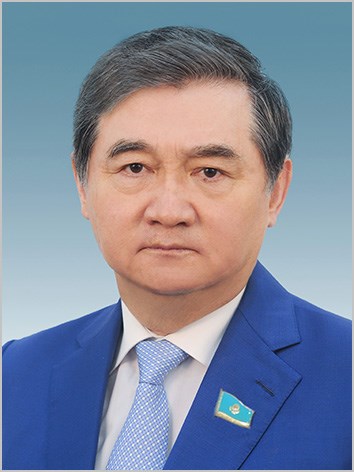 Let us not forget: the works of one of the greatest modern philologists – Vladimir Nabokov’s “Commentary to Pushkin’s Eugene Onegin,” Yuri Lotman’s “Pushkin. Biography of a Poet,” Mario Vargas Llosa’s “Flaubert and Madame Bovary” – they were all about that same thing. About the context of a certain great literary achievement of the past.

Parts of Abdrakhmanov’s essay “Thus Spoke Abai” were reprinted and discussed on the pages of some of Russia’s most popular and influential newspapers: Komsomolskaya Pravda, Nezavisimaya Gazeta and Argumenty i Fakty. The interest of the Russian-speaking public could be easily explained: the essay is easily readable and talks about things both familiar and new to the followers of highbrow literature in Kazakhstan, Russia and other countries. This essay tells us about the writers of our childhood: Pushkin, Lermontov, Byron, Lafontaine and Ivan Krylov – but their works and life stories are presented in a very special Kazakh way, they are put in the context of the Great Steppe.

Abdrakhmanov chose his special theme: how were the world’s great literary works interpreted by Abai, which obstacles and prejudices did he have to overcome when searching for a way to bring Pushkin and Lermontov to the heart of his freedom-loving nomadic people, which was originally more used to listening and not reading long poetic works.

From Aesop to Abai

Did you know, for example, that Aesop’s famous fable “The Crow and the Fox” originally speaks of meat, and not of cheese, as the Fox’s prized reward for flattery?

The great French writer La Fontaine replaced Aesop’s meat with cheese (a part of “delicatessen” of his epoch). Abdrakhmanov proves that it was a part of La Fontaine’s “text strategy”: the Fox is not going after something necessary for survival (such as meat), its lies are a way to get an undeserved luxury. Later the Russian translator of that fable Ivan Krylov chose to stick with cheese. Abai Kunanbayev, who followed suit translating from the French and Russian translations into Kazakh, kept the cheese option, but used the adjective ‘karagym’ (my dear) when describing the Fox’s flattering attempts to make the Crow sing. Abdrakhmanov proves convincingly that Abai did it to demonstrate his Fox’s special approach to flattery. 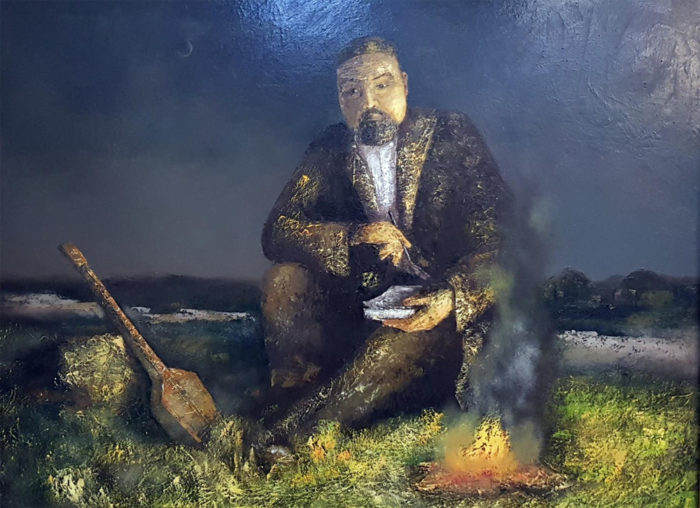 Abai Kunanbayev. The painting was created by the artists from the Zhagyru creative association. The painting is on display at the Museum of Arts of the East Kazakhstan region in Ust-Kamenogorsk.

“There was no shortage of meat in the Great Steppe of Abai’s times,” Abdrakhmanov explains Kunanbayev’s decision to keep the cheese. And cheese, especially the famous cheese from the Duchy of Limbourg, mentioned in the first chapter of Pushkin’s “Eugene Onegin,” cost a lot because it was imported straight from the producer in today’s Belgium.

But this is just the beginning of Abdrakhmanov’s “chain of contexts,” which follows Aesop’s fable from its Greek origin via the French and Russian translations to Abai’s supreme interpretation. “It is hilarious how in the French translation by La Fontaine the Fox is addressing the Crow as a nobleman speaking to a nobleman,” Abdrakhmanov writes. Indeed, let’s see the French original:

Here is an English translation:

At the top of a tree perched Master Crow;
In his beak he was holding a cheese.
Drawn by the smell, Master Fox spoke, below.
The words, more or less, were these:
“Hey, now, Sir Crow! Good day, good day!
How very handsome you do look, how grandly distinguished!”

Even in the English translation one can see the satirical approach of La Fontaine to his countrymen’s attempts to appear “distinguished” and to be addressed by the words “sir” and “maître” (a word somewhat more respecting than “mister” or even “master”).

Abdrakhmanov notes that in Krylov’s translation Lafontaine’s two noblemen (the Crow and the Fox are both “maitres,” respected men, in Lafontaine’s fable) suddenly become women, and the Fox calls the Crow “a sister” trying to get into her good graces. In Abdrakhmanov’s analysis, this is a hint at Russians’ habit of searching for relatives and friends in a certain sphere where one has to get an advantage.

In Abai’s translation the Fox addresses the Crow as a friend (‘karagym’), without referring to any relatives, which reflects the Great Steppe’s ideal of camaraderie. In the Kazakh variant, there is no referring to class solidarity (some very forgivable for the seventeenth century “class solidarity of noblemen” in the French translation) or to family connections  (the “sister” of the Russian translation).

In Abai’s translation, the Fox (a man) speaks to the Crow as a friend and an equal, but “with a sweet voice” and obviously with some gentlemanly compliments (“what a neck, and the eyes… no need to be shy about your voice too!”).

The result is a funny and charming translation of the immortal tale with several important Kazakh realities, which Abdrakhmanov reveals to us, making shine a side of Abai’s talent that we haven’t been aware of.

In his quest for context, Abdrakhmanov does not limit himself by the legacy of Abai alone. In his research on translation of European fables, Abdrakhmanov brings to our attention the memoirs of Ybyrai Altynsarin, the prominent Kazakh educator of the 19th century.

“Initially, Abdrakhmanov writes, Altynsarin did not want to include fables into the textbooks for Kazakh children, saying that it took some time for Kazakh children, who grew up in a very severe natural environment, to see the charm of fables. Originally they preferred “realistic” stories to the fictional settings of speaking crows and foxes.”

But,  Abdrakhmanov notes, in 10-15 years this hurdle was overcome: both children and parents learnt to understand and love Aesop’s language. Kazakhs quickly learnt and adapted to their needs European culture, while preserving their own. And in unfree Soviet times Aesop’s language proved to be not just a charming luxury, like cheese in Crow’s beak, but an instrument of survival, necessary for a free thought.

Abdrakhmanov’s essay is free not only from political constraints. It is also free of the desire to get rid of the past and free of the fear to look further into the future. It is this freedom which is most precious today.

Sauytbek Abdrakhmanov is Deputy of the Mazhilis (the lower chamber of Kazakh Parliament), Head of the Deputy Group of the Assembly of the People of Kazakhstan in the Mazhilis and Doctor of Philology.

Abdrakhmanov was born in 1951 in the South Kazakhstan region. He graduated from Al-Farabi University in the early 1970s. He started his career as a journalist and worked in the Socialist  Kazakhstan newspaper for 12 years. Later he became the editor-in-chief of Yegemen Kazakhstan (Sovereign Kazakhstan) newspaper. He was the Kazakh Minister of Information in 2003-2004. In 2016 he was elected into Mazhilis (the lower chamber of Kazakh Parliament).