By Nazgul Abzhekenova in Culture on 21 November 2020

NUR-SULTAN – The National Center for Manuscripts and Rare Books is presenting a collection of unique books from the Abu Nasr Al-Farabi to the Dinmukhammed Kunayev’s epochs in the Kazakh capital.

The National Center for Manuscripts and Rare Books is located in the center of the Kazakh capital.

It all started with runes

The National Center for Manuscripts and Rare Books opened in June 2017 under the Ministry of Culture and Sports. The center is engaged in the collection and preservation of written sources for the National Archival Fund of Kazakhstan. The academic council of the center determines the authenticity of manuscripts as well as their historical and monetary value.

“Unique books and their copies come to us from various sources – such as the funds of domestic and foreign libraries, archives, and museums,” said the head of the research department of the center Kamshat Parimbekova.

The center cooperates with colleagues from near and far abroad. The Research Center for Islamic History, Art and Culture (IRCICA) in Istanbul regularly transfers valuable publications to the Kazakh capital, including a copy of a seventh century Koran.

“There are now 10,000 storage units in the center’s fund with more than 300 books and manuscripts including Arabographic rarities in the Arabic, Persian, Turkish, and Chagatai languages,” said Parimbekova. 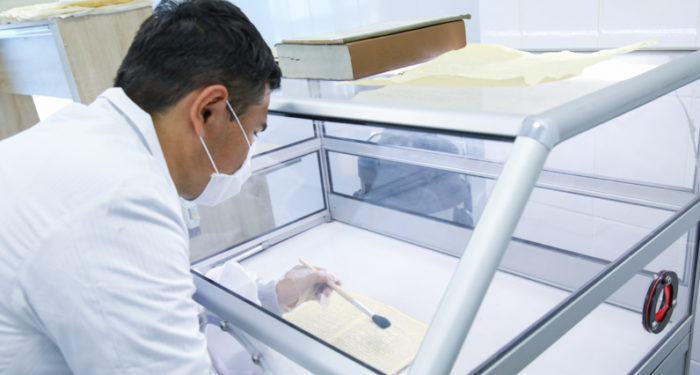 The hall from which our excursion begins includes several sections: Turkology, Islamic culture, History of Kazakhstan, and great figures. About 60 books are exhibited here, the rest are kept in the center’s fund in special conditions.

“The first exhibits are dedicated to the Orkhon-Yenisei script and the Old Turkic script, which are also called runes. The section “The Epoch of the Turks” presents “Diwan Lughat al-Turk” (“The Compendium of the Turkic languages”) by Mahmud Kashgari – an encyclopedia of Turkic languages, including folklore of the late 11th century in Arabic,” says expert of the center Almat Absalikov.

In the future, a separate section dedicated to works in Old Turkic script, the history of the Karakhanids, and Golden Horde literature is planned. 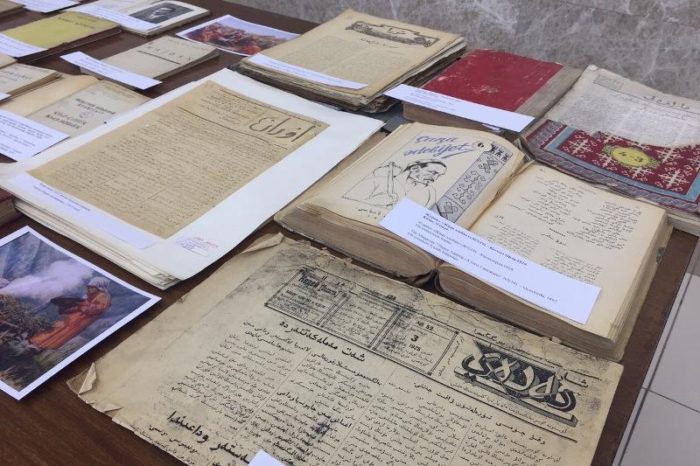 There is a facsimile of an ancient manuscript of the famous “Hikmets” of Khoja Ahmed Yasawi, which is a copy of the works of the thinker published in 1912, preaching Islam and calling on the Turkic-speaking peoples to strive for spiritual unity and sovereignty. There are also the works of his student, Suleimen Bakyrgani, the author of “Akhir Zaman Kitabi” – the Islamic version of the Apocalypse.

From Ak Orda to Seine

“The fate of books is like the fate of a person; the geography of wanderings and adventures is sometimes so amazing. Recently, an electronic copy of the works of Qutb, one of the founders of the classical Golden Horde written literature of the 14th century, was received from the National Library of France. How did this work end up on the banks of the Seine? The book of Qutb was copied in Egypt by the Mamluks of Turkic origin, and after Napoleon came to the land of the pharaohs, it ended up in France at the end of the 19th century, and now the original is kept in the national library of this country. The book was written in the city of Syganak, the capital of Ak Orda, which later became the capital of the Kazakh Khanate,” said Absalikov. 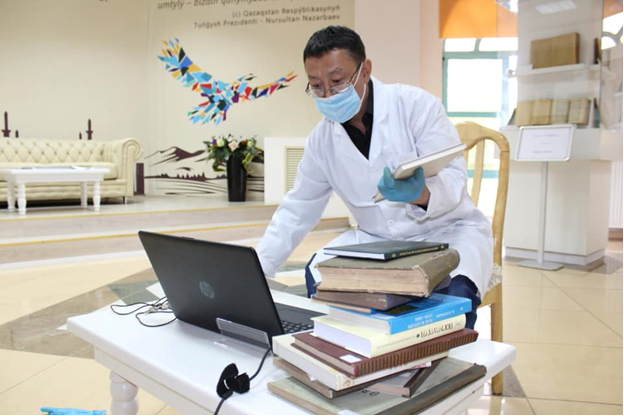 The period of the Golden Horde at the Center for Manuscripts and Rare Books is represented by other interesting works. Among them is a copy of the decree of the Golden Horde Khan Tokhtamysh to the Polish king Jagail, published in 1850 by Prince Mikhail Obolensky.

There are also textbooks on arithmetic, physics, human anatomy, literature and other disciplines in Latin; statistical reviews of Akmola, Turgai, Semirechensk and other regions in the period 1883-1917, about the size of the local population, economy, livestock and other indicators.

We also had a chance to visit the holy of holies of the center – the book restoration department. Here three magicians Baksha Ashirbekova, Dana Musina and Zhanserik Beysenkulov under the leadership of Syrym Botabekov bring the oldest publications back to life.

“First of all, we place the book for a month in a chamber with an inert gas, where it is purified and disinfected. Everything accumulated by old editions – the plaque of time, dust, bacteria, book mites – is removed,” said Ashirbekova.

As it is not possible to learn book restoration in Kazakhstan, specialists receive knowledge and practice in other countries like Iran, Turkey, Korea, and France.

“If washing is required, we prepare a special solution of distilled water and salt, which restores the structure of the paper, because the pages of old books often crumble. And we dip paper into this “bath”. After that, each sheet of the book is put on a dryer. We build up the missing pages with the help of special Japanese-made paper, and then we tint it, so that the extended fragment looks like an original. Then we collect the book, and in order not to mix up the pages (we often restore books in Arabic, Chagatai and other ancient languages), we pre-number them. We glue the pages with flour glue, which we prepare ourselves. It is easy to remove such glue with water and restore the book again; ordinary glue will not allow us to re-restore the book. At the final stage, we make the cover, and the bookbinding is made as in the original – on internal or external cords. All this takes another month,” said Ashirbekova.

Particularly valuable copies of books are covered by leather, the rest have eco-leather covers. Based on the results of the work, specialists draw a technological map for each book, which includes a biography of the publication and the history of manipulations carried out with it as well as an annotation containing paleographic information (authorship, time and place of creation of the literary monument).

For example, the center gave new life to the book “Al-Mabsut” written by Shamsuddin Muhammad ibn Ahmad ibn Abi Sahl al-Sarakhsi, a book of the Hanafi madhhab (Islam school), published in 1906. The work was written in the 11th century in Naskh (one of the six styles of classical Arabic writing, as well as the handwriting of scribes). Open sources say that the author, who was called “the sun of imams,” wrote this book over the course of 15 years, sitting in prison (in the capital of the Karakhanid Kaganate, Uzgen), having neither ink nor paper. His students wrote down the teacher’s thoughts, standing at the top of the pit in which Imam Sarakhsi was imprisoned.

Wise thoughts about farming and more

Our journey into the world of manuscripts and rare books ended in the reading room of the center. The works of Dinmukhamed Kunayev and other contemporaries presented here are of enduring interest. Scientists, political scientists, journalists and visitors who are simply not indifferent to the history of their homeland will be interested to open the pages of rare publications written by politicians or cultural figures.

What did the livestock breeder, twice Hero of Socialist Labor Zhazylbek Kuanyshbaev convey in his book “Word to the Sons”? What was the main message of the books of the Honored Rice Grower, the record holder for growing the “white gold” of the East, also twice Hero of Socialist Labor Ybyray Zhakaev? More about “Wise Thoughts about Agriculture” and other publications one can find in the Center for Manuscripts and Rare Books.

The article was originally published in the Russian language on the Caravan.kz website.