By Zhanna Shayakhmetova in Nation on 20 November 2020

NUR-SULTAN – The first all-republican primaries of the Nur Otan party were completed, the first deputy chairman of the Nur Otan Party Bauyrzhan Baibek reported on Nov. 18. The primaries, which were held from Aug. 17 to Nov. 17, were initiated by Nur Otan Party Leader Nursultan Nazarbayev before the upcoming Majilis (a lower house of the Kazakh Parliament) elections. 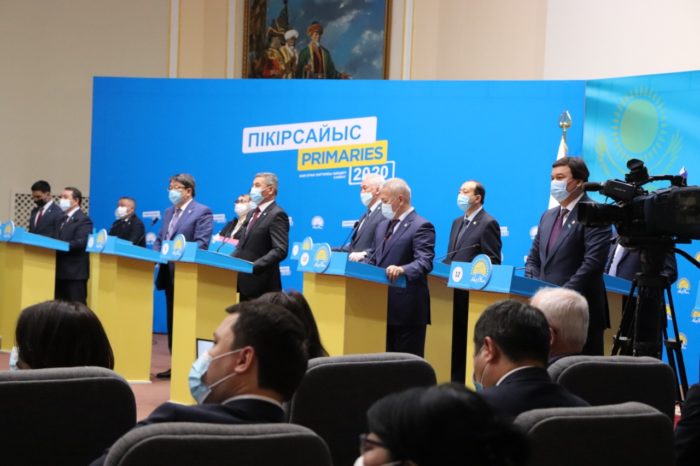 The Nur Otan Party announced the results of primaries held nationwide on Nov.18.

“These were the most exciting and challenging periods both for candidates and for all party employees – from the central office to the regional branches… The primaries were of great interest due to the open and transparent selection process,” Baibek added.

As a result, more than 662,000 people took part in the voting, or 84 percent of all Nur Otan members at the first stage. Each of the 10,000 participants had supporters and observers, which involved about 1.5 million people.

Party Leader Nazarbayev instructed to include the intra-party election (primaries) into the Nur Otan Charter considering the positive experience. The corresponding draft amendments to the Charter will be submitted for approval at the 20th Congress of the party, slated for Nov. 25.

The Auyl People’s Democratic Patriotic Party announced its list of candidates for the Majilis elections at the Nov. 18 meeting of party members. 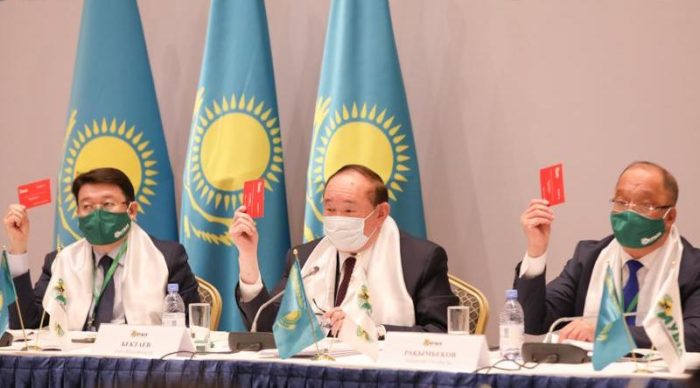 The meeting of the Auyl People’s Democratic Patriotic Party took place on Nov.18.

The list of 19 candidates include chairman of the board of the National Agrarian Research and Education Center and former presidential candidate Toleutai Rakhimbekov, chairman of the board of the Kazakh AgroTechnical University and former First Vice Minister of Agriculture Kairat Aituganov, head of the entrepreneurship and industrial and innovative department of the Zhambyl akimat (local executive body) region Karlygash Aralbekova and other public figures.

The youngest candidate is aged 28 and the oldest one is aged 61.

Chairman of the Auyl party Ali Bektayev said the party intends to raise issues related to rural development as the delegates to the congress approved the party’s election program.

“Our main goal is to win seats in the Parliament… We have been working in this direction for many years. Our party is among three leaders in terms of geographical location and the number of party members. We have about 300,000 members and thousands of party organizations,” said Bektayev.

The party proposes to develop a system of long-term loans to agricultural producers, to allow ethnic Kazakhs return to their homeland with personal property and to introduce a child trust fund, which will be issued to citizens upon reaching 18.

The Auyl party was unable to get enough votes to be represented at the Parliament in the 2016 parliamentary elections as only 2.01 percent of people voted for the party.

The meeting of the Adal Political Party was held on Nov.19. Photo credit: Informburo.kz.

The party’s program focuses on five key directions: a worthy life for all people, entrepreneurship as the basis of a successful state, agri-industrial sector development and food security, strong regions are a strong country and a state for the people. The delegates approved the proposed list unanimously.

The party proposes to introduce the institution of bankruptcy for individuals. “People should have the right to write off debts,” said member of the Adal political council Eldar Zhumagaziyev.

He noted that the party also intends to reduce the administrative restrictions for business people.

The party members presented a new website. Now people can support or report a problem in the Problems of your region section on the website. All requests will be sent directly to the regional party representative. The site also has a section for a job search and business ideas for different regions.

The party failed to muster sufficient votes in Parliament to be elected during the 2016 parliamentary elections.