By Andrey Dovgolenko in Society on 3 October 2020

Kazakhstan is celebrating the 1150th anniversary of the outstanding thinker from the East, Al-Farabi, who was born on the territory of modern Kazakhstan. Having more than a thousand-year history, Al-Farabi’s views remain relevant today. Kazakh President Kassym-Jomart Tokayev emphasized the important role that the spiritual heritage of Al-Farabi has on the formation of values among the younger Kazakh generation. Doctor of Philosophy and Editor-in-Chief of the Al-Farabi magazine  Galiya Kurmangaliyeva spoke about the importance of the political doctrine of the Eastern thinker today. 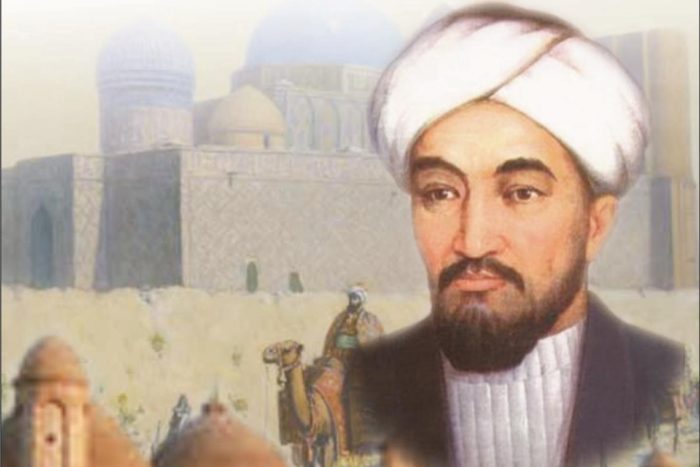 The political philosophy of al-Farabi is multifaceted

– Galiya Kurmangalievna, could you tell our readers about the essence of Al-Farabi’s political views. What is the difference between his views and, for example, Plato or Aristotle?

– The political philosophy of Al-Farabi is presented in treatises created in the mature period of his work, as well as in treatises devoted to the presentation of Plato’s philosophy. Chief among them are “Treatise on the views of the residents of the virtuous city,” “Civil policy,” “Aphorisms of the Statesman,” “The Attainment of Happiness,” “The way to happiness,” “Philosophy of Plato…” and “Summary of Plato’s Laws.” 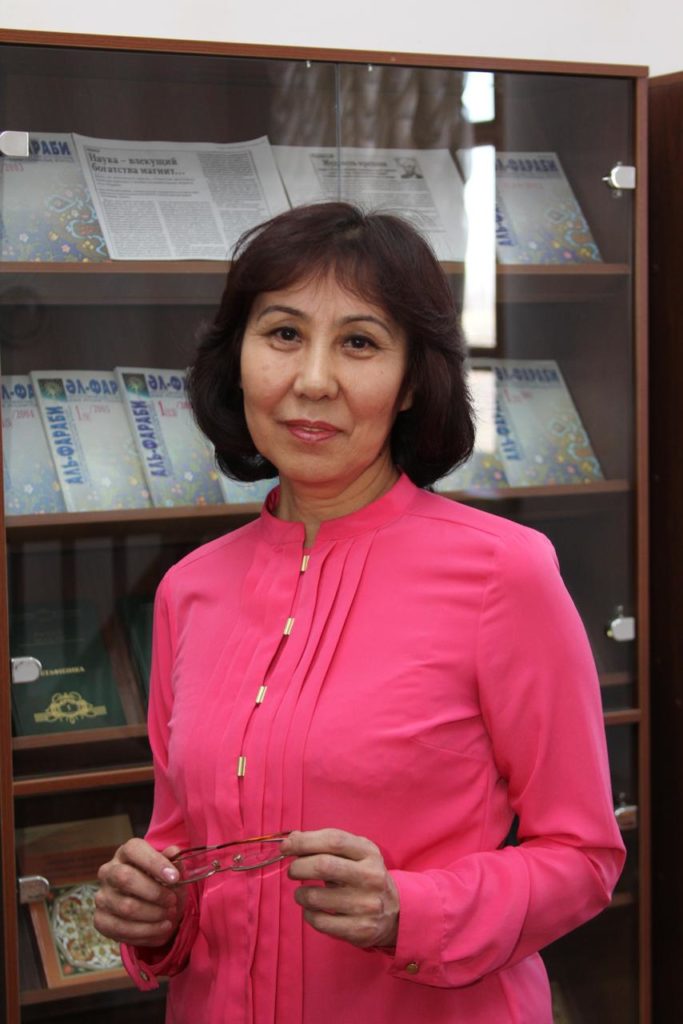 In these works, the thinker reveals a wide range of problems of political philosophy. According to the thinker, happiness is achieved in unification, mutual assistance and peaceful co-existence of people, since a person is a civil being, called upon to live in society. Happiness is found in spiritual development and in the completeness of a person’s moral life. And it is achieved not by escape from society and isolation from its needs and requirements, but by living in a society where the meaning of human existence is acquired. Therefore, deep and intense searches of Abu Nasr Al-Farabi work are aimed at answering the question of what the state should be and what should be the beliefs and moral attitudes of its citizens. Ultimately, these are eternal reflections and an open conversation about what a perfect society, a perfect state and a perfect person should be.

– And what is the political ideal of Al-Farabi?

– Al-Farabi created the concept of the state and explains that it arises as a form of political organization of society. Society itself arises for reasons of material order, dictated by the need to unite in order to obtain the necessary means of subsistence. At the same time, it should be noted that the life of human society described by Al-Farabi is organically inscribed in the worldview and holistic picture of the universe presented in medieval Islamic culture. Human society in it occupies a middle place, between the sublunary and superlunary worlds. Its hierarchy is analogous to the cosmic hierarchy, where there is a first principle, followed by all others. Abu Nasr Al-Farabi defines it as Necessary Existence, the cause of all things, thereby revealing his religious picture of the world in the language of philosophy.

In the political philosophy of the thinker, the functioning of the state is revealed as an analogy of the functioning of the human body. The state, according to Al-Farabi, is a harmoniously formed and well-functioning organism in which all organs are interconnected with one another. They are functionally dependent on each other and act as a whole. The thinker claims that just as in the human body there is a main organ – the heart, to which all other organs are subordinated and on which the activity of the organism depends, in the same way the state has a first principle – the ruler, on which the activity of the entire state depends. And as in a living organism, all organs ensure the healthy functioning of the body, so in the state all citizens help each other in achieving happiness.

Al-Farabi’s political ideal is presented in the form of a virtuous city, which is opposed to ignorant cities, its antipodes. The difference between a virtuous city and ignorant cities is that a virtuous city implements a moral form of communication and social relations based on justice, rallied and strengthened by love. Achieving moral living together is possible as a result of knowing what is good and evil, what is justice, moral behavior and moral deeds. Al-Farabi believes that a person’s deed depends on his knowledge, therefore a virtuous state is built based on knowledge and aims at overcoming people’s ignorance. 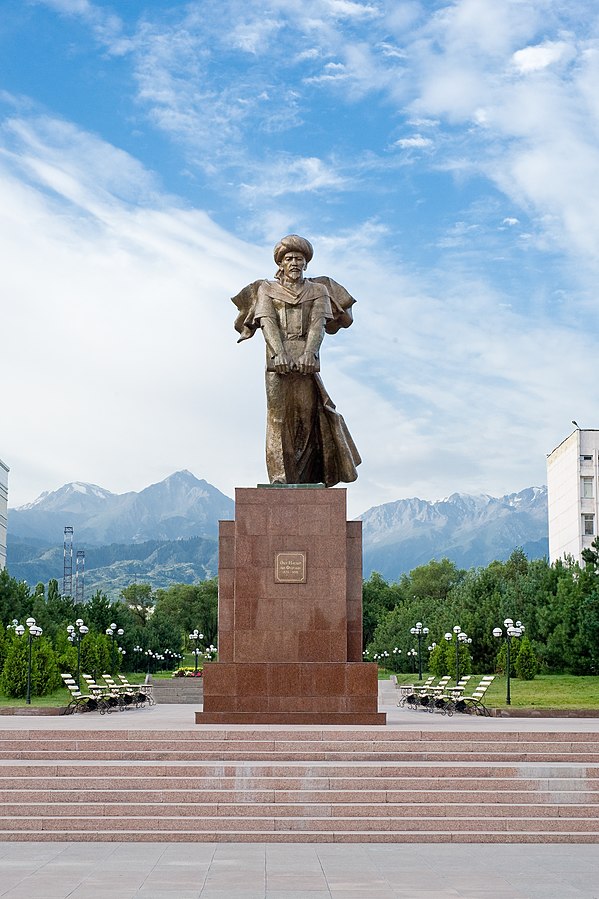 Ignorant cities do not know what a true state is and what a true life should be. Therefore, they are vicious and are guided by a false understanding of the happiness to which they strive. These are cities of vices. There are many of them – the city of depravity and baseness, the city of honor, the city of necessity, the city of power, the city of ignominy and others.

In his political ideal, Al-Farabi could not ignore the problem of leadership. The political leader of the state embodies a perfect person who possesses twelve qualities necessary for a political leader. He rules in accordance with the qualities of a true ruler as the worthiest representative of the citizens of the state. In an ideal leader, personalities of philosopher, legislator, imam (Islamic mosque leaders) and ruler are united. The blessing for a legitimate state, according to Al-Farabi, is adherence to reason and law in public affairs.

In his theoretical and political constructions, Al-Farabi relies on the achievements of the philosophical and political thought of Ancient Greece. But above all, he proceeds from the provisions of the truth transmitted by Muhammad to Islamic culture.

I want to emphasize that Al-Farabi presented a programmatic vision of the way of forming a true view of the world, a person’s place in it, in accordance with which a person must create the necessary political conditions for his life in order to be free, happy and confident in the future. This is a solution to the problem of forming the worldview of a person and society, proposed in the era of the Islamic Middle Ages. The task of our day today also lies in the formation of a new worldview, adequate to the new realities of our time. Therefore, the legacy of Al-Farabi is not only our past, but also the present. His ideas are timely and vital.

– Even though Al-Farabi’s views are more than a thousand years old, they are still relevant today. In your scientific practice, were there any cases when modern politicians of Kazakhstan turned to the philosopher’s heritage?

– In the political reality of modern Kazakhstan, Al-Farabi’s legacy is extremely important. As you know, the Kazakh government  has initiated modernization processes due to the new world reality. The third modernization, the tasks of which were defined in the program articles of the First President of Kazakhstan Nursultan Nazarbayev “Looking to the Future: Modernizing Public Consciousness,” “Seven Facets of the Great Steppe” and in this year’s message from the Kazakh President Kassym-Jomart Tokayev “Kazakhstan In A New Reality: Time For Action,” are based on the theoretical platform of the heritage of the past, aimed at the spiritual revival of national identity. The spiritual and intellectual heritage of Al-Farabi plays a major role in these processes and reflects a Turkic-Islamic synthesis of humanistic ideas.

The birthplace of the philosopher, the medieval city of Otyrar, is an integral part of the sacred geography of Kazakhstan, which not only forms the framework of national identity, but also has global significance. For a long time, due to the prevailing Eurocentrism, Turkic and Islamic cultural heritage was hushed up or remained on the periphery of not only the public, but also scientific interest. However, at present it arouses genuine interest, reviving for the present the best spiritual and intellectual traditions of the past. 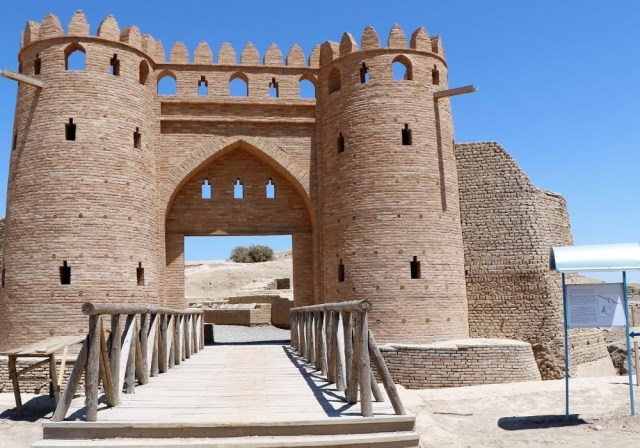 The gate to the medieval Otyrar.

The modernization of Kazakhstan’s Identity, which is carried out on the basis of national identity, the preservation of the cultural gains of the past and present, and the strengthening of the spiritual roots of the national consciousness, cannot but rely on the intellectual phenomenon of Al-Farabi. Therefore, in one form or another, these ideas sound in the speeches of the politicians of Kazakhstan, especially when they relate to the cultural wealth of Kazakhstan and the strengthening of Kazakh patriotism. Al-Farabi is a cultural symbol of Kazakhstan. His name is immortalized in the memory of the people, people write and speak about him not only in the year of celebrating the 1150th anniversary, but there is a stable research in the area of Farabi studies in Kazakhstan. It contributes to the expansion of the educational and enlightenment space of the Kazakh society regarding the legacy of Al-Farabi, which politicians that think about the present and future of our country cannot pass by.

– Are modern Kazakh youth interested in the teachings of Al-Farabi? What do young people resonate with from the multifaceted heritage of the thinker?

– As I have already said, today, Kazakh citizens, especially the younger generation, have a great interest in previously little-studied historical facts, as well as cultural phenomena of the past. Sociological surveys in 2019 and 2020, conducted by the Institute for Philosophy, Political Science and Religion Studies showed that, according to the respondents, the greatest impact on Kazakh culture was made by the Islamic, Turkic and Soviet cultures. The influence of Soviet culture was mainly noted by the older generation. The young and middle generations noted the first two, which confirms the increase of public interest in previously unexplored layers of culture and history. This also coincides with the tasks of implementing the national platform for spiritual renewal, determined by the state and its policy in the ideological sphere. Therefore, young people are showing interest in the cultural heritage of the past, including Al-Farabi. 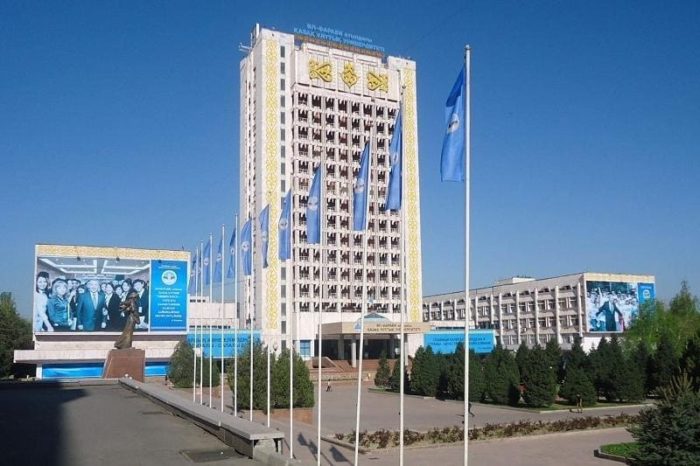 In this context, I would like to emphasize the importance of the educational model of the Al-Farabi Kazakh National University – Al-Farabi university – smart city. The leading university in our country, one of the top 200 best universities in the world, implements the idea of ​​the virtuous city of Abu Nasr Al-Farabi in its activities. The modernization of public consciousness in Kazakhstan is based on the fact that education is the most fundamental factor of success in the future. A highly educated personality endowed with virtuous qualities is a trend in a well-thought-out educational policy of the country’s leading university, where the main character of the new reality of Kazakhstan is being formed. Ideas of spiritual revival based on the cultural heritage of the past that are implemented not only at the Al-Farabi Kazakh National University, but also other universities of our country, form a new trend in the spiritual and intellectual development of youth and their role in the future of the country.

– What topics do you bring up in the Al-Farabi magazine? How is international cooperation developing?

– The Al-Farabi journal of socio-humanitarian research  was organized by the Institute of Philosophy, Political Science and Religious Studies in 2003 with the support of the Cultural Representation at the Embassy of Iran in Kazakhstan. Initially, it was aimed at international cooperation and familiarization of scientists from Iran, Turkey, Kazakhstan, Central Asian countries and Russia with theoretical developments of each other in the field of fundamental research in philosophy, political science and religious studies. The journal covers topical issues of these sciences and is recommended by the Committee on Control in Education and Science of the Ministry of Education and Science of Kazakhstan for publishing the main results of scientific research in philosophical and political sciences. It is included in the Kazakh scientific citation base. Our authors include scientists from Russia, Turkey, Iran, China, U.S., Germany, Ukraine, Tajikistan, Azerbaijan, Kyrgyzstan and other countries.