By Aidana Yergaliyeva in Nation on 8 October 2020

NUR-SULTAN – Kazakhstan’s First President Nursultan Nazarbayev wrote an article titled the “Spiritual Legacy of Abai” on Sept. 7 where he narrates his experience with Abai’s life and the influence it had on his personality and his life. 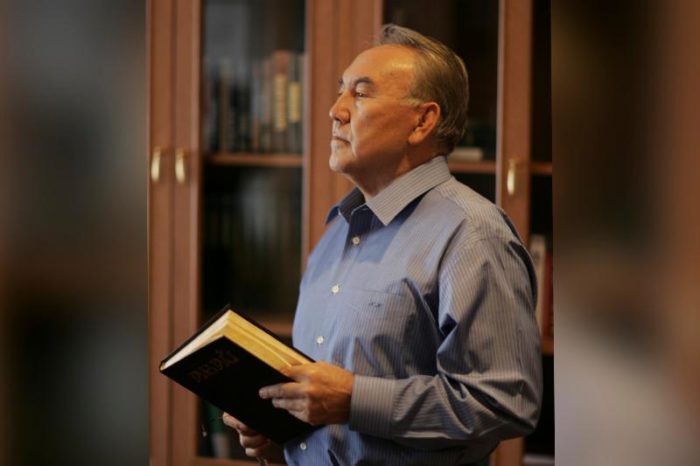 According to Nazarbayev, Kunanbayev is a “phenomenon” and a milestone connecting the past with the future. Abai lived during the late 19th and early 20th centuries, a transition period from nomadic to sedentary lifestyle for Kazakhs.

“The years of Abai’s life came at a time when Kazakh society finally lost the former system of political governance based on the institution of khan power and ‘oz kolynan oz yrky ketip (dropping freedom from one’s own hands),’ faced an unclear, foggy future,” he said.

According to Nazarbayev, he turned to Abai’s “Words of Wisdom” when charting a course for contemporary Kazakhstan after the collapse of the Soviet Union.

Nazarbayev wrote that he “absorbed the spirit of his work in childhood” through the stories, tales and legends narrated by his grandmother and mother. Later he studied at a school named after the great thinker, where he grasped Abai’s philosophy and ideas even deeper.

Abai’s principles and beliefs have always been guiding Nazarbayev in making life changing decisions throughout his life and “prompted me to expand the horizons of my interests and knowledge,” he said.

Nazarbayev takes pride in leading the construction of Nur-Sultan, the new Kazakh capital, from Akmola, a small village in the middle of steppes. He thereby fulfilled Abai’s dream of a world where Kazakh people can be free from colonial dependence, he said.

“The once free world of nomads plunged into the abyss of historical oblivion. Ancient Turkestan, which used to connect the main roads of the inhabited world and served as a proud symbol of the unity and indivisibility of the Kazakh country, has long lost its former significance. Alas, Abai did not have such a capital, in which he could seek understanding, and support. Probably, there is no greater sorrow for a genius who has longed for freedom and unity for his people all his life,” he said.

Kazakhstan is a melting pot of people of 130 ethnicities practicing different religions. At the start of its independence, Nazarbayev realized the importance of establishing a state that accepts and embraces cultural differences to unite the nation. The history shows that any kind of division between tribes, ethnic groups, religious factions and other identities can result in massacres, wars, and “endless enmity,” against which Abai warned, he said.

Nazarbayev also endorsed Kazakh President Kassym-Jomart Tokayev for “his ability to find a harmonious balance between the ideals of national unity and adherence to universal values.”

The COVID-19 pandemic broke out on the Abai’s 175th anniversary. In this crisis, Kazakhstan and humanity can also find strength in Abai’s words that encourage them to believe in a brighter future and to remember that all difficulties are only temporary.

“I am sure that the words and ideas of Abai, which serve as the cornerstones of our modern everyday life, will continue to find concrete embodiment in our creative deeds and progressive aspirations,” he concluded.