By Zhanna Shayakhmetova in Business on 27 October 2020

NUR-SULTAN – The direct investments from the United States to Kazakhstan exceeded $53 billion or 15 percent of the total amount of attracted foreign capital since 1991, reported Kazakh Prime Minister Askar Mamin at the Oct. 26 online Kazakh-American Business Council at the US Chamber of Commerce. 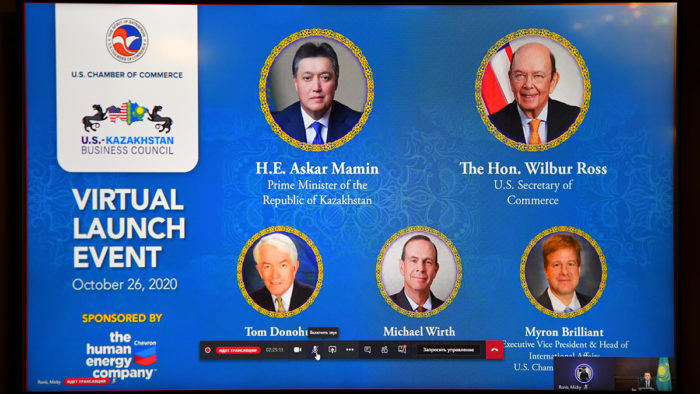 The United States is one of the largest economic, trade and investment partners of Kazakhstan. The Kazakh government intends to attract more US companies to the country. Currently, US companies operate in the fields of mechanical engineering, chemical, construction, IT, agri-industrial mining, the metallurgical and oil and gas sectors in Kazakhstan.

Kazakh Prime Minister said that the world’s leading credit rating agencies including Moody’s, Fitch and S&P took into consideration the low national debt, fiscal stability and the effectiveness of the government’s anti-crisis measures.

“Investments are important for our new economic model,” explained Mamin. “The new measures to improve the investment climate will be similar to other global competitive economies.”

United States Secretary of Commerce Wilbur Ross said that since 2000, US-Kazakhstan trade in goods has more than tripled, reaching $1.9 billion.