By Zhanna Shayakhmetova in International on 27 October 2020 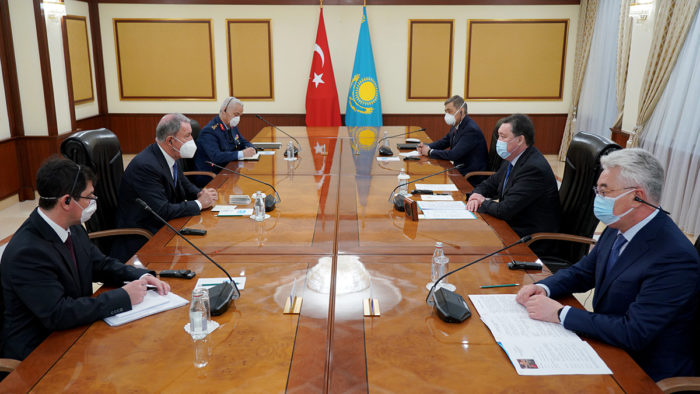 Mamin noted that the cooperation between Kazakhstan and Turkey has been at an all-time high level.

“The warm relations between the heads of our countries play an important role in expanding bilateral cooperation. Kazakhstan and Turkey carry out constructive dialogue in a bilateral format and cooperate as part of the United Nations, the Organization of Islamic Cooperation, the Organization for Security and Co-operation in Europe and the Conference on Interaction and Confidence-Building Measures in Asia,” said Mamin.

The officials discussed the prospects of cooperation in the military education and military-industrial sector as well as investment projects in the defense industry implemented by Turkish companies.

“I believe that existing cooperation in military training, cooperation, and the defense industry will continue to grow, and this will be very beneficial for our countries and armed forces,” said Akar.

Yermekbayev noted that Turkey is Kazakhstan’s strategic partner and that Kazakhstan pays great attention to strengthening multifaceted strategic relations with Turkey. Friendship and mutual understanding between the heads of the states play a key role in expanding bilateral cooperation.

Kazakh cadets are trained in the service military schools of Turkey and personnel  of the Armed Forces of Kazakhstan study in Turkish training centers as part of the military education agreement.

Last year, the Ministry of Defense of Kazakhstan for the first time organized training for Turkish military personnel at the National University of Defense.

On top of that, Turkey is one of Kazakhstan’s top trade partners. The trade turnover between Kazakhstan and Turkey exceeded $3 billion at the end of 2019. In the first 8 months of this year, the bilateral trade increased by 1.4 percent compared to last year and reached $2.1 billion. Overall, direct investments from Turkey to Kazakhstan amounted to more than $3.7 billion since 1991.