NUR-SULTAN – The meeting of the Kazakh-French Business Council with the participation of more than 100 companies, heads of state bodies of Kazakhstan and France was held virtually on Oct. 30, reported the Foreign Ministry’s press service. 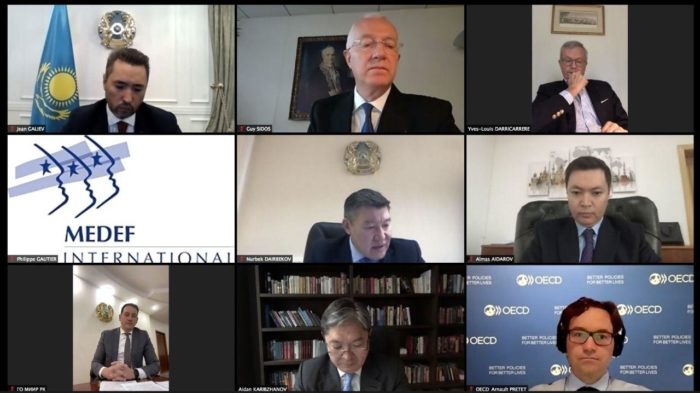 Prospects for economic development in the new Corona world, and further investment into Kazakhstan were the agenda of the event.

“Our country has been implementing reforms to improve the investment climate. This means fostering a dialogue between the government and entrepreneurs. Infrastructure is being improved to attract new investments as well as advanced technologies. On behalf of the head of state, a strategic investment agreement is being developed to support major investors. This agreement will provide a set of state support measures including tax preferences, concessional financing, guaranteed purchases from the state, and export support. It is important to note the guarantees regarding the stability of written legislation and industry preferences,” said Aidarov.

As part of the event, the Kazakh officials held bilateral meetings with the French investment bank BpiFrance, Saint-Gobain company, one of the world’s largest building materials companies and manufacturer of innovative material solutions and the Air Liquide multinational company.

France is included in the list of Kazakhstan’s key trade and investment partners. Direct foreign investments from France to Kazakhstan was about $11 billion since 2010. Some 166 companies with French capital are registered in Kazakhstan. The companies are represented in the oil and gas sector, uranium industry, mechanical engineering, agroindustry, pharmaceuticals, transport, tourism, digitalization, energy, and other sectors.