The snow leopard is listed as endangered on the Red List of Threatened Species and is viewed as an indicator of the mountain ecosystem health in Central and South Asia, according to UNDP.

Kerteshev said that an analysis of the threats and opportunities for snow leopard conservation is the basis of Kazakhstan’s strategy. Kazakhstan is one of 12 countries with a snow leopard landscape. The number of snow leopards in Kazakhstan hovers around 130-150 of the species.

“There is no accurate data on the number of snow leopards in the world. It is estimated that there are anywhere from 3,500 to 7,500 snow leopards. Due to this, the Global Snow Leopard and Ecosystems Program (GSLEP) secretariat launched the World Snow Leopard Assessment (PAWS) initiative due to the lack of an accurate scoring system. It aims to study and monitor animal populations using the latest scientific methods including camera traps and genetics. Due to these methods, we were able to estimate the number of snow leopards in the territory of Kazakhstan,” Kerteshev said. 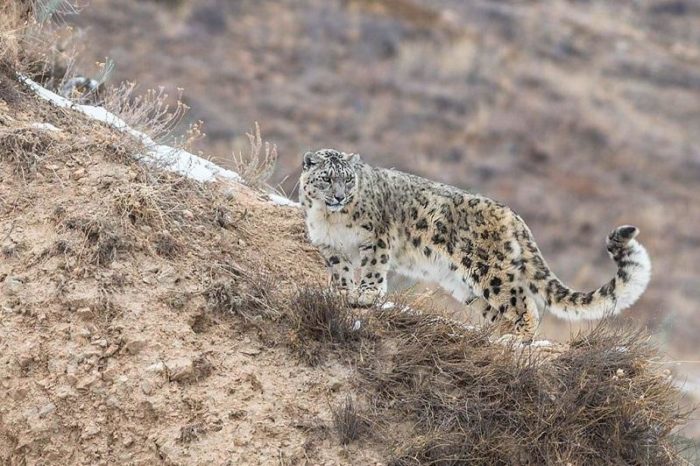 The Global Environment Facility (GEF) and UNDP began the implementation of projects to preserve the leopard population in the country in 2013. UNDP and the Kazakh government launched the GEF project Conservation and Sustainable Management of Key Globally Important Ecosystems for Multiple Benefits in 2018. The project is being implemented until 2023. One of its key issues is to support the conservation of the snow leopard and its habitats.

Kerteshev noted that the UNDP’s Biodiversity and Ecosystems Global Framework seeks to meet the Sustainable Development Goals to protect and restore terrestrial systems, as well as promote their sustainable use and halt biodiversity loss.

“We contribute to the development of natural resource supply, regulating, and supporting cultural ecosystem services by developing specially protected natural areas in Kazakhstan. Ecosystems are connected with components of human well-being such as health, safety, good living conditions and social relationships,” he said.

By protecting the snow leopard population, Kazakhstan is also making a contribution to global biodiversity conservation efforts. It is known that the snow leopard inhabits 12 countries over a total area of ​​500,000 square kilometers.

Since 2019, the UNDP has also been conducting scientific research to determine the boundaries of potential habitats of the snow leopard and its food supply in cooperation with the Kazakh Institute of Zoology.

“We did research work in the Zhambyl, Almaty and the East Kazakhstan regions. It includes the potential habitat of the snow leopard in the mountain ranges of the Kyrgyz, Zailiyski, Kungei, Dzhungarski Alatau, Ketmen, Saur and Tarbagatai mountains. We plan to complete this research by the end of 2021,” he said.

The first images of a snow leopard were snapped in early 2020 in the Zhambyl region. “This was a significant achievement,” Kerteshev explained . “It is possible to monitor that at least five snow leopards reside in a small area of ​​this ridge in two gorges due to the photo-traps. Breeding females prove that animals inhabit that area. Previously we only observed the visits of animals from neighboring Kyrgyzstan.”

“It is necessary to coordinate actions and efforts between the two countries to further increase the number of snow leopards in the future. We plan to create a new specially protected natural area in ​​the Merke State Regional Natural Park. Its creation is expected in the coming years,” he said.