President at the UN: Is Tokayev’s Speech Indicative of Kazakhstan’s New Place in the World?

By George Baumgarten, United Nations Correspondent in International on 24 September 2020

NEW-YORK –  In his second appearance before the United Nations (UN) General Assembly as Kazakhstan’s Head of State, President Kassym-Jomart Tokayev spoke both as one of Asia’s rising young leaders, and also as the Head of State of one of the rising powers on the continent. Last year (2019) had been his “debut appearance.” This time he appeared as one who was already one of the “shining stars” of Asia’s rising generation. 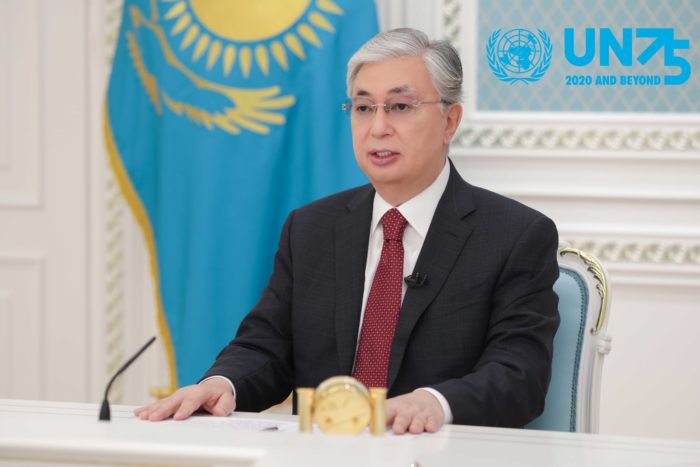 The President lost no time identifying this as a “dramatic and critical time” to be celebrating the UN’s 75th anniversary. He referred to the Covid-19 Pandemic as both an “unprecedented human tragedy” and a “stress test” for all humanity. He lauded the selfless work of health workers around the world, and extended his “profound gratitude” to all the world’s medical professionals and other health workers, who are protecting all of us in this time of “global disfunction”.

The President said that humanity had “missed the chance’ implicit in the end of the Cold War. Therefore, we must establish—as he called it—the paradigm of a “New World” for the next generations. And quoting the Kazakh poet and philosopher Abai, he cited the need for “love, compassion, bold actions, deeds and thoughtfulness.” Therefore, the world now faces a “make or break” moment.

The world’s first priority must be to combat the deadly virus. In contrast to some other world leaders who seem obsessed with fixing blame for the outbreak, President Tokayev offered clear, practical suggestions. These fell into four major categories:

1.The building of strong national health systems, which may include the upgrading of institutions.

2.In this point, the president resorted to the greatest and  bluntest statement: “take the politics out of the vaccine.”

3.Possibly changing certain international health regulations and procedures, and increasing the power and capacity of the World Health Organization (WHO).

4.The establishment of Regional Centers for Disease Control, in various parts of the world.

In addition, President Tokayev proposes the creation of a new specialized agency, to be known as the International Agency for Biological Safety.

Turning to the economic aspects of the crisis, the president called for a “New Global Deal” to deal with these effects, which have been particularly hard on landlocked countries like Kazakhstan. These plans, he said, might be developed at the forthcoming High-Level Meeting on Financing for Development.”

The objective, the President said, should be obvious: zero hunger. This proposal of the president should be notable both for its clarity and its bluntness.

The President then turned to the familiar refrain which has always animated and inspired much of Kazakhstan’s thinking, and especially her foreign policy: the perennial issue of nuclear proliferation and the cessation of nuclear testing.

This issue also provided a transition to Kazakhstan’s other perennial concern: the combating of the effects of climate change, some of which are unusual or even unique to the Kazakh territory and climate. He defined these effects as not only a threat in themselves, but also as a “threat multiplier.”

President Tokayev next cited the country’s particular areas of Climate Concern: The alarming drying up of the Aral Sea and the climactic effects at the Semipalatinsk Nuclear Test Site. He asserted that Kazakhstan is particularly vulnerable in these areas.

But any progress on the aforementioned efforts will require international cooperation and—above all—international trust. This will have other positive effects as well: the promotion of cultural diversity, and the combating of international terrorism. And he particularly urges all states to subscribe to the “Code of Conduct for Achieving a World Free of Terrorism.”

These are but a few of the international efforts in which Kazakhstan has become increasingly involved.

The President’s speech then went on to mention one of the country’s efforts which is particularly unusual–even unique– that Kazakhstan wishes—and intends—to become a “listening state.” He projects, by this plan, that she will listen to other states’ concerns, rather than impose or even advocate her chosen policies. And he mentions further that Kazakhstan intends to join the Second Optional Protocol to the International Covenant on Civil and Political Rights. This shows that the country—and its President—intend to be leaders among the rising republics in the world today.