By George Baumgarten, United Nations Correspondent in International on 28 September 2020

NEW-YORK – Landlocked countries have a special series of problems all their own. Principally, any commercial shipments—or any travel, for that matter—must me made over land, by road, in trucks or trains, or be flown in by air. This creates problems for any such shipments… and rapidly escalating costs for all such economic activity. 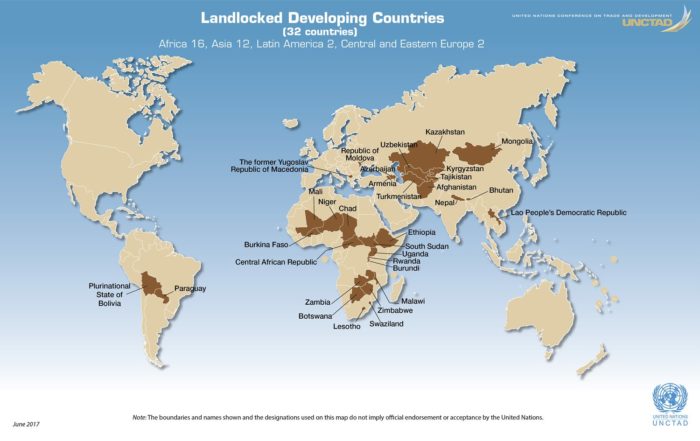 The United Nations (UN) developed a special program, known as the Vienna Program of Action, to address the special needs of Landlocked Developing Countries (LLDC’s). That program runs for the decade 2014-2024.

As the largest landlocked country on earth, Kazakhstan is honored to be the current chair of the UN’s Committee on Landlocked Developing Countries. As such, she presided over the recent LLDC Conference, at the UN in New York.

The address to the Conference of the Secretary-General, Antonio Guterres, was most clear and direct: “The impact of the Covid-19 pandemic is exacerbating the plight of landlocked developing countries.” And he further cited the looming threat of debt distress. He clearly was addressing himself directly to the LLDC countries, saying that he and the UN were “here to partner with [you] on solutions.”

Guterres also committed to helping LLDC’s transition from fossil fuels to “renewable energy systems.” And this is but one  part of a Decade of Action to promote and deliver on the UN’s Sustainable Development Goals.

Among the other needs addressed by the Secretary-General was the need to integrate pandemic responses with efforts to combat climate change. And—as alluded-to above—the Vienna Program of Action fits right in to these efforts.

Among the priorities on the immediate horizon, according to the Secretary-General, are the combatting of illicit financial flows and the critical investment in transport infrastructure. Also among the important factors is cooperation among the LLDC’s, as well as with “transit countries.”

Guterres also called for the “strengthening of the capacities” of the High Representative for the Least Developed Countries, Landlocked Developing Countries and Small Island Developing States (OHRLLS). This must be coordinated with Covid-19 response, as well as the revival of the Paris Agreement on Climate Change.

Returning to the direct tone of his opening words, the Secretary-General advocated the establishment of six principles:

1.Invest in green jobs and sectors

2.No bailouts for polluting industries

6.Leave no one behind

These are the actions of particular concern to Landlocked Developing Countries, that the Secretary-General sees as central to success, on the UN’ 75th anniversary.

The other major address at the LLDC meeting was that of Volkan Bozkir of Turkey, President of the 75th Session of the UN’s General Assembly. Bozkir quoted his own address at the 75th Anniversary Commemoration, saying that the UN must become “a more agile, effective and accountable organization.”

Bozkir noted that while everyone must fight Covid-19—which he called “the greatest global challenge since the end of the Second World War”—the most vulnerable countries have been the hardest hit. And this especially includes Landlocked Developing Countries. Therefore, it was important to achieve progress on the Paris Agreement on Climate Change, as well as other agreements.

The President cited the Decade of Action on the Sustainable Development Goals, and noted that the SDG’s “have the potential to serve as a blueprint for resilient recovery from Covid-19.” And while each country’s conditions and context differ, efforts must be concerted to achieve a “global, sustainable recovery.”

The important role already being played by Kazakhstan in the entire LLDC process is both a prominent and a critical one. She sits at the nexus of Landlocked Development and Climate

Change, having been so severely affected by Soviet nuclear testing. And as the largest LLDC, what happens in Kazakhstan affects her landlocked colleagues throughout the world. She therefore stands to be a critically important Landlocked Leader, and one of the world’s “powers to watch” in the 21st Century.