By Zhanna Shayakhmetova in International on 25 September 2020

NUR-SULTAN – Kazakhstan joined the Second Optional Protocol to the International Covenant on Civil and Political Rights aiming at the abolition of the death penalty adopted by the United Nations General Assembly (UNGA) in 1989, reported the press service of the Kazakh Ministry of Foreign Affairs. 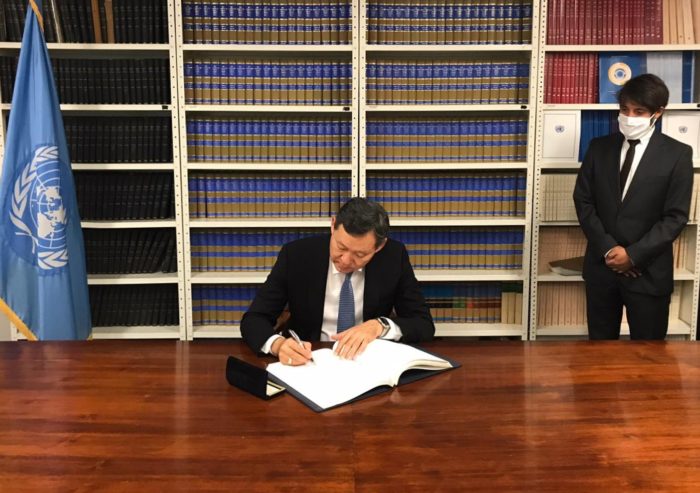 Kazakhstan’s Permanent Representative to the UN Kairat Umarov signed the protocol on Sept. 23.

The international treaty will enter into force after its ratification by the Kazakh Parliament.

Kazakhstan’s Permanent Representative to the UN Kairat Umarov signed the protocol on Sept. 23 at the UN headquarters.

Kazakh President Kassym-Jomart Tokayev announced that Kazakhstan will join the Second Optional Protocol to the International Covenant on Civil and Political Rights on the abolition of the death penalty at the high-level session of the 75th UN General Assembly (UNGA) on Sept. 23. Tokayev noted that Kazakhstan is committed to upholding the fundamental right to life and human dignity.

Kazakh President set the task before the Ministry of Foreign Affairs to start the process for joining the Second Optional Protocol in December 2019. Kazakhstan has consistently pursued a policy of liberalization and humanization of criminal penalties and has maintained a moratorium on capital punishment since 2003.

“This initiative was voiced at the National Council of Public Trust. Currently, there is a moratorium on the death penalty in Kazakhstan. The need to join this protocol was raised by Kazakh human rights activists and experts during discussions at the meetings of the National Council of Public Trust,” Aide to the President of Kazakhstan Erlan Karin wrote in his Telegram channel.