By Zhanna Shayakhmetova in Culture on 16 September 2020 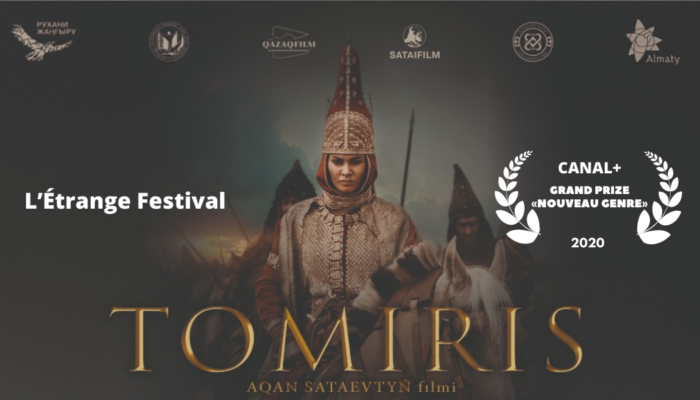 A French premium television channel Canal+, one of the festival partners, will present the film in its primetime line-up, reported Satayev on his Instagram.

The film “Tomiris” tells the story of the life of legendary queen Tomiris. As a great ruler and skillful warrior Tomiris led and united the Saka tribes to successfully defeat the Persian conqueror Cyrus the Great in 530 B.C. The film is based on manuscripts written by ancient Greek historian Herodotus of Halicarnassus. Tomiris was a debut performance for Almira Tursyn. Syrian actor and film-maker Ghassan Massoud played the role of the Persian king Cyrus.

“Carried by its romance and the fury of history, Tomiris mixes entertainment and the fascination for an outstanding character, a strong independent woman, that many neophytes will discover. What a captivating heroine this formidable ruler was, what a clever strategist and unequaled warrior! Almira Tursyn, in her first role, steals the show whenever she appears on screen. This sumptuous dynamic Kazakh superproduction, never loses its wind and offers novel changes of scenery with limitless horizons and singular costumes, be they sparkling armors or simple sandals. Embark on this thrilling trip through faraway lands and ancient times,” reads the festival’s release.

Titled as a sword-and-sandals adventure by Hollywood Reporter, Satayev’s “Tomiris” will be released in late September in North American movie theaters after Arclight Films sold the U.S. distribution rights to the Well Go USA company. The trailer for the US audience was also recently released on YouTube.

Satayev was also an executive producer for Adilkhan Yerzhanov’s film “A Dark Dark Man” featured in this year’s competition.

Released in 2019 the film earned 480 million tenge (US$1.1 million) at the box office in a month. The film was also long-listed as a Best Foreign Language Film nomination at the 2020 Golden Globes.

L’Étrange Festival was established in 1993 and takes place annually during the first half of September. It is one of French major genre film festivals that features fantasy, drama, horror films, documentaries as well as family films.