The International Day Against Nuclear Tests – a Big Event for Kazakhstan, a Pioneer in Their Abolition

August 29 is the internationally celebrated International Day Against Nuclear Tests. It is highly symbolic that the establishment of this important annual event was initiated by Kazakhstan and the date of August 29 was chosen because it was on this day in 1991 Kazakhstan terminated nuclear tests on its soil and shut down the Soviet nuclear testing site in Semipalatinsk, a city in the north of Kazakhstan. It should be noted that this decision to shut down the testing site was taken by the first President of independent Kazakhstan, Nursultan Nazarbayev, before Kazakhstan obtained independence in December the same year. 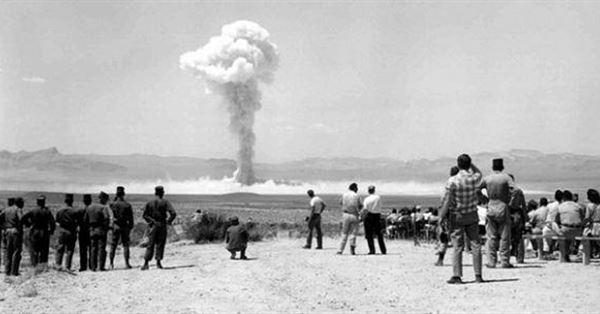 In this way, nuclear free status became a “positive birthmark” of the newly independent nation and the campaign to help the world get rid of nuclear weapons became one of the central themes of Kazakhstan’s foreign policy. At the moment of gaining independence from the Soviet Union in 1991, Kazakhstan was one of the strongest nuclear powers in the world, because the country still harbored more than one thousand nuclear warheads from Soviet arsenals. The conditions of the day, when the Soviet Union collapsed in the end of 1991, allowed the former Soviet constituent republics (all 15 of them) to become the owners of the Soviet property that remained on their territory. But Kazakhstan’s first President preferred the moral capital of becoming a pioneer in ridding the world of nuclear weapons to the controversial “blessing” of being able to call himself the president of a nuclear power. Unlike many other leaders, who talk about the need to get rid of nuclear weapons while preserving substantial arsenals of them, Nazarbayev truly believed in the ultimately self-destructive nature of nuclear weapons, confirmed by many experts in the field now. Global Zero for him is a real commitment, proven many times under the most dramatic of circumstances.

The moral capital gained from the decision taken back in the early 1990s is still bringing its dividends to Kazakhstan, since the problem of nuclear proliferation just refuses to leave humanity in peace. The Comprehensive Nuclear Test Ban Treaty (CTBT) was adopted by the United Nations’ General Assembly back in 1996, but it still has not gained legal force, since eight countries out of 44 key signatories, mentioned in the Annex II to CTBT, have not ratified the document in their parliaments. What it took Kazakhstan 6 days to do in 1991 (to stop the nuclear tests forever and to start recultivating the poisoned soil, with the President and the Parliament in full agreement on this matter), it still takes decades for some other states to do.

So, a resolution of the UN’s General Assembly adopted on December 2, 2009, on Kazakhstan’s suggestion, proclaimed August 29 of each year the International Day Against Nuclear Tests. It was remarkable that the suggestion of Kazakhstan’s President was approved unanimously, and the Resolution 64/35 of the UN’s General Assembly became a binding document, one of the jewels in humanity’s treasury of anti-war legal documents. On this day, in every country of the world people are being enlightened on the problem of nuclear testing and informed about the pernicious consequences of such tests.

The moral pressure for ending the tests is growing, as the project ATOM (Abolish Nuclear Testing is Our Mission), initiated by President Nazarbayev in 2012, is gaining support worldwide. ATOM’s petition for ridding the world of nuclear tests was signed by more than 312 000 people from more than 100 countries, and the signatures keep coming.

Kazakhstan was the first country that took a step towards a nuclear disarmament. On August 29, 1991, by the Decree of the President of the Kazakh SSR Nursultan Nazarbayev, the Semipalatinsk test site was closed. Photo credit: E-history.kz.

Resolution 64/35 says: “Member States, the United Nations system, civil society, academia, the mass media and individuals are invited and encouraged to commemorate the International Day against Nuclear Tests in an appropriate manner, including through all means of educational and public awareness-raising activities.”

Numerous international officials, political leaders, experts in the sphere of nuclear weapons and disarmament, they all agree: for Kazakhstan this UN resolution is not just words, it is a program of action, which is fulfilled every day, on all the levels of the government structure, civil society, academia.

Lassina Zerbo, Executive Secretary of the Comprehensive Nuclear-Test-Ban Treaty Organization (the international body monitoring the fulfillment of CTBT) had the following words to say about the role of Kazakhstan in the promotion of this treaty:

“Kazakhstan closed its Semipalatinsk nuclear test site on 29 August 1991, and following the closure, some 1,400 nuclear warheads and other materials were disposed of or decommissioned.  Kazakhstan had acceded to the NPT in 1994, with other states — including Belarus, South Africa and Ukraine — following suit.  But now we need to observe August 29 as a time to act, not to wait.  The CTBT was one obvious instrument that brought the world closer to the goal of complete disarmament, and I call on the eight remaining Annex II States whose ratification was needed to show the political will to endorse the Treaty.”

The world’s leaders note the special role, which Kazakhstan’s first president Nursultan Nazarbayev played in ridding his country of weapons of mass destruction and in nuclear disarmament worldwide.

In 2006, the House of Representatives of the United States’ Congress saluted the outstanding cooperation of Kazakhstan’s government in implementing the Cooperative Threat Reduction (CTR) program and in 2008, two Congressmen proposed the name of President Nazarbayev for the Nobel Peace Prize. In 2012 this nomination was supported by members of the Japanese parliament. The special role of Kazakhstan’s First President in promoting peace was stressed by some of the most respected heads of state worldwide. 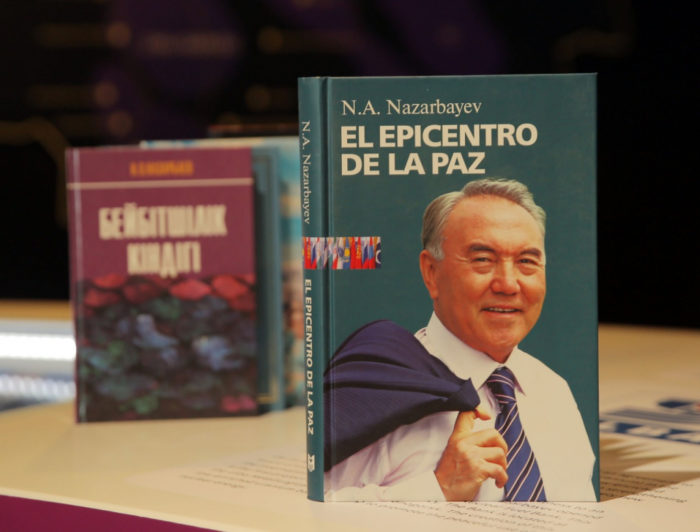 Nazarbayev’s contribution to nuclear disarmament and non-proliferation were recognized by a number of international awards and supported by the most respected heads of state worldwide. Photo credit: E-history.kz.

“President Nazarbayev by his leadership and his very right “good neighbor” policy has achieved what others could not achieve. It was Nazarbayev who made Kazakhstan a factor of stability in Central Asia.”

Further in his speech , Mr. Schröder singled out Nazarbayev’s special role in promoting nuclear disarmament around the globe.

The Turkish president Recep Tayyip Erdogan, reminding his audience of Nazarbayev’s valuable mediation in numerous conflicts and in protection of Turkic-speaking nations, called  Nazarbayev “an outstanding statesman and a respected elder for all of the Turkic-speaking world” by the summary of the Kazakh leader’s achievements, including those in the sphere of disarmament.

As for Kazakhstan’s neighbors, the countries of Central Asia, their acknowledgement of Kazakhstan’s leadership in the sphere of nuclear disarmament was expressed even in the choice of venue for the signing of the historic Treaty on Central Asian Nuclear-Weapon-Free Zone (CANWFZ). The Treaty was signed in 2006 in Semipalatinsk, once and for always ridding the territories of Kazakhstan, Kyrgyzstan, Uzbekistan, Turkmenistan and Tajikistan of the danger of being even a temporary “home” for nuclear weapons.

Galia Ibragimova, a leading expert of the Moscow-based PIR Center, a think tank specializing in nuclear security, called the Central Asian Nuclear-Weapon-Free Zone Treaty a historic achievement, noting that it was a typical for Nazarbayev “win-win” solution: the signatory states not only confirmed their nuclear-weapons-free status, but also received guarantees of security in exchange for an obligation to keep that status.

The special role which Kazakhstan plays in nuclear disarmament was also stressed  by the former US U.S. Secretary of Energy Ernest Moniz. He is now a respected figure in America’s movement for peace, publishing articles on the need to preserve the existing arms control agreements between the US and Russia in the most prestigious American magazines, where Mr. Moniz’s by-line stands next to the by-lines of former US presidents and secretaries of state.

“In the 20 years since President Nursultan Nazarbayev’s dramatic decision to stop the tests in Semipalatinsk, the United States and the Republic of Kazakhstan have worked together closely to achieve our shared nuclear security goals,” said Mr. Moniz, who was president Barack Obama’s top energy official.

Moniz, who got personally involved in Kazakhstan’s efforts to promote disarmament, specially stressed the fact that for Nazarbayev the destruction of weapons of mass destruction was not just a slogan, but a series of concrete actions.

“Kazakhstan helped lead the effort to create the Central Asia Nuclear Weapon Free Zone… From Kazakhstan’s side, it hasn’t been simply words but actions and results, from Project Sapphire, under which 600 kilogrammes of highly-enriched uranium was safely removed from Kazakhstan to the closure of an anthrax factory in Stepnogorsk,” Mr. Moniz added.

However, besides the personal commitment of Kazakhstan’s First President  Nursultan Nazarbayev to nuclear disarmament, there was another powerful factor that pushed Kazakhstan to the forefront of the international movement for disarmament. Nazarbayev’s dramatic steps in that field would have not been possible without support from the civil society and from Kazakhstan’s people in general.

The reasons for that support are not only in the peaceful nature of the people of Kazakhstan. Between 1949 and 1989, not less than 468 nuclear tests were conducted at the testing site in Semipalatinsk. About 1.5 million people in Kazakhstan had their health damaged by these tests, to a greater or to a smaller degree. And we know from the example of Japan: it is the nations that suffered from nuclear weapons that are most active in fighting for their dismantlement and future prohibition.