By Zhanna Shayakhmetova in Society on 4 August 2020

NUR-SULTAN – The Library of Kazakhstan’s First President – the Elbasy has launched the Legacy of Abai as a Moral Guideline virtual video exhibition dedicated to the 175th anniversary of Kazakh poet and philosopher Abai Kunanbayev, according to the library’s press service.

“The archival materials of the exhibition include the speeches of First President Nazarbayev on the celebration of the anniversary of Abai. One can say that Abai’s legacy is of great importance for Kazakh people. Each speech is a scientific paper, revealing a deep knowledge of the works from the founder of Kazakh literature,” reads the release.

Nazarbayev contributed to the promotion of Abai’s legacy in the world. The year 1995 was declared the Year of Abai by the United Nations Educational, Scientific and Cultural Organization (UNESCO).

“It is good to celebrate the year of Abai. It is good to learn by heart Abai’s poems. Abai’s deep thoughts and bold revelations are the foundation of our life. We should remember this. This is the only proof of our loyalty to the wise thoughts and instructions of Abai, our deep understanding and awareness in the memory of the teacher,” Nazarbayev said at the official meeting dedicated to the 150th anniversary of Abai on Aug. 9 in 1995 in Almaty. 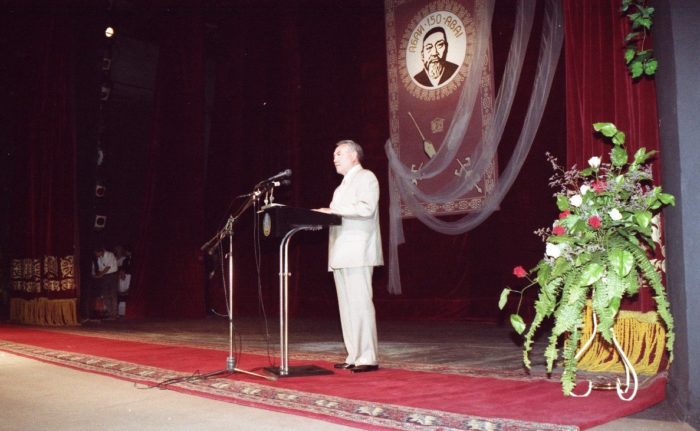 Kazakhstan’s First President Nursultan Nazarbayev delivers remarks about the importance of Abai’s works at the meeting dedicated to the 150th anniversary of Abai on Aug. 9 in 1995 in Almaty. Photo credit: Presidentlibrary.kz.

The exhibition shows the significance of his works not only for Kazakh people, but also for all the civilization. Abai opened the world to his people and introduced the classical works of foreign writers for the first time in the country. For people, Abai is a symbol of humanity without national borders, which has become a universally recognized Kazakh model – a world free from violence, and manifestations of national identity, declared Kazakhstan’s First President.

The books presented to the First President by the authors has a special place in the Elbasy’s personal library. It includes Nikolai Anastasiev’s book “Abai. The Severity of the Flight,” and Mukhtar Auezov’s “The Path of Abai” translated into Russian by Anatoly Kim.

The Kazakh poet, writer, philosopher, composer and translator was born in the Abai district near Semei. Abai is considered the founder of Kazakh literature. Abai’s philosophy has since become an integral part of the county’s cultural and national identity. His book “Words of Wisdom” is considered a literary masterpiece.