By Aidana Yergaliyeva in Culture on 23 August 2020

NUR-SULTAN – Famous Kazakh cellist Sandi Tokanova also known as Sandi Toka Nova spoke to The Astana Times about her performances at charity concerts to support Kazakhstan during the pandemic in a music video featuring a medley of Kazakh songs on Charyn Canyon, and the appreciation of Kazakh melodies among European audiences. 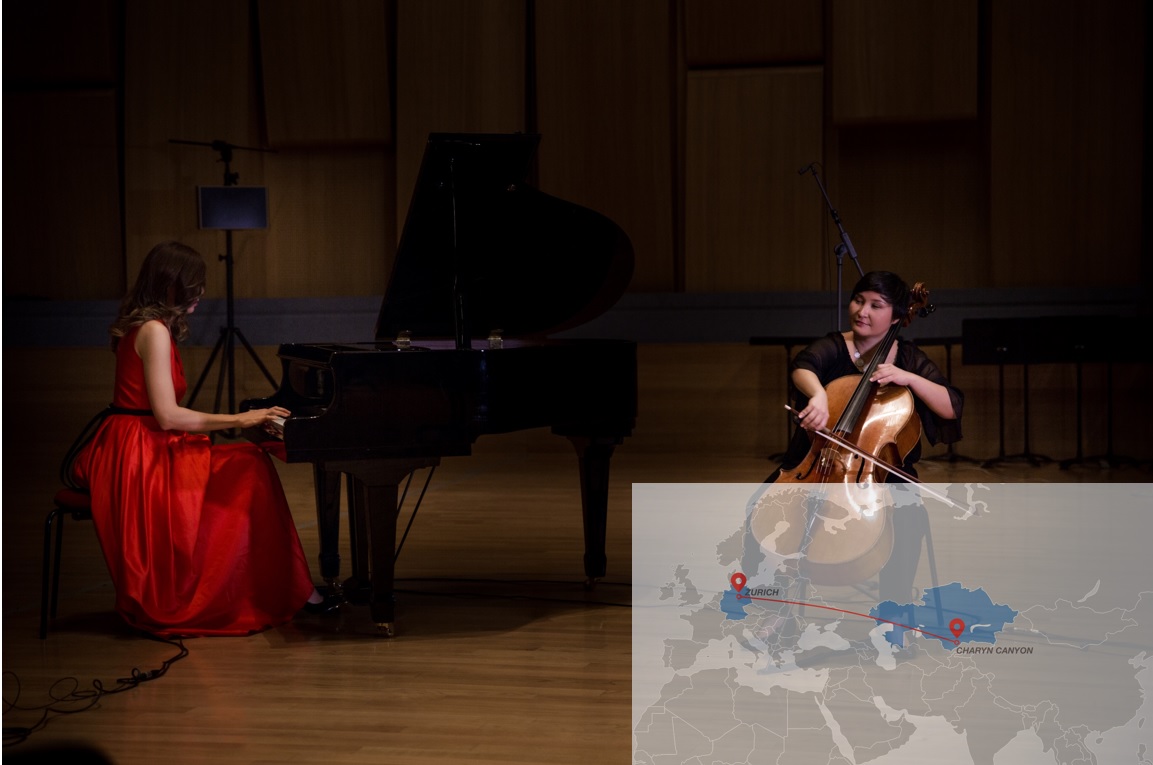 Born and raised in Almaty, Tokanova moved to Switzerland in 2000 to continue studies at the private Academy of Music Tibor Varga. Tokanova is a prizewinner of many national and international competitions such as Zhubanova Competition, Nicati de-Luz Fondation Competition, among others. She performed in the most prestigious halls all over the world.

The artist speaks with special warmth in her voice about her native Kazakhstan. When the epidemiological situation with COVID-19 in Kazakhstan started to worsen, Tokanova eagerly participated in a May 15 digital live concert on YouTube to raise money for the Obedy Medikam (Lunches for Medical Workers) charity project. The project has been supporting Kazakh medical workers with free meals and helping local restaurants to stay in business during the lockdown. The PIANOCELLO, her duet with pianist Irina Grebaus, was well-received at the digital concert.

When Kazakhstan reintroduced quarantine on July 5, the “Birlik Kazakh-Swiss association that was recently founded decided to help the country to fight COVID-19. And we as musicians volunteered to perform,” she said. Tokanova performed in a July 22 charity concert to support Kazakh medical workers as part of her Benefiz Festival Zürich.

The concert raised 14,000 francs (US$15,381) and Birlik sent a part of it to purchase personal protective equipment for medical workers at Semei and nearby regional hospitals. Another part was directed to offer stipends for frontline young medical workers, volunteers and students of medical universities.

“It is done to acknowledge their contribution and to exchange experiences with the European association of Kazakh doctors through online training,” she said.

In addition to charity projects, Tokanova is involved in many other projects where she performs both as the soloist and as a member of an orchestra. Tokanova is especially proud of her duet with Grebaus as the PIANOCELLO. Grebaus, like Tokanova, left Kazakhstan to settle in Switzerland. The artists longing for their old life in Kazakhstan spurred them to release a breathtaking Kazakh medley video in May. Grebaus arranged the medley from two Kazakh folk songs – “Yapyrai” and “Dudarai,” and two well known signature songs – Akan Seri’s “Karatorgai” and Estai’s “Nazkonyr.”

“Swiss audiences listen to Kazakh music with great interest. In particular, the folk songs are well-received. Irina and I performed the medley several times in concerts in Europe,” she said.

Many Kazakhs take pride in the majestic nature of Kazakhstan, often referring to it as “the second Switzerland.” The duet, thus, first recorded the video on the shore of Zurich Lake. The musicians, however, found no resemblance and a distinct lack of the unique features found in their native Kazakh lands. The duet decided to fly to Kazakhstan and shot the video on Charyn Canyon near Almaty in the fall of 2019.

“We really hoped that the alpine landscapes would resemble the view of the Tien Shan mountains, but, unfortunately, this was not achieved in the picture,” she said.

Tokanova also emphasized the western audience’s response to the duet’s version of Abai Kunanbayev’s “Kozimnin Qarasy (The Apple of My Eye).”

“People approach me and tell me what a beautiful sound it is and how much they like it. Some people say things like ‘I’ve got the feeling that it is the most beautiful song in the world’ both on social media and after the concerts,” she added.

Tokanova looks forward to collaborating with more Kazakh artists and again performing on stages in Kazakhstan after the end of the COVID-19 pandemic. Her last performance in Kazakhstan was at Expo 2017, where she also was an artistic director of the classical part of the cultural program.